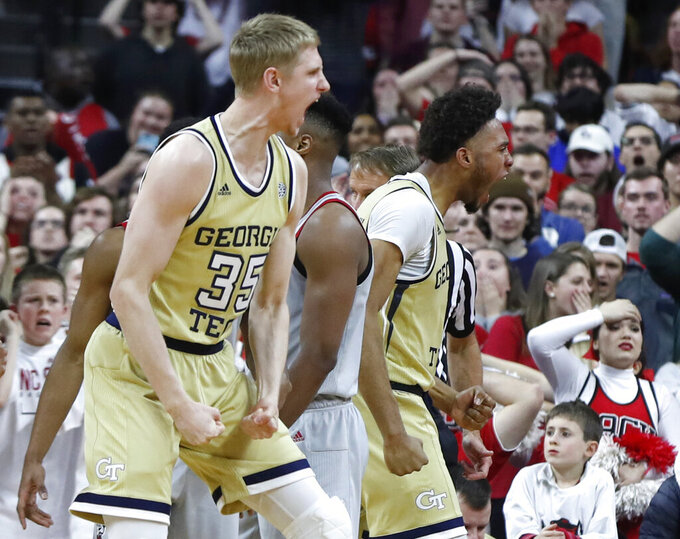 RALEIGH, N.C. (AP) — With 5.5 seconds remaining, Georgia Tech coach Josh Pastner told his players during a timeout that they were going to find a way to win the game.

Guard Jose Alvarado proved Pastner right by dashing the length of the court and passing to James Banks III for a two-handed, go-ahead dunk with one second remaining, stunning N.C. State in a 63-61 win Wednesday night at PNC Arena.

Banks, who led Georgia Tech with 19 points, was fouled on the play and made a free throw to complete the 3-point play for a two-point margin. N.C. State (20-10, 8-9 ACC) countered by completing a long pass to C.J. Bryce, but his shot from the top of the key bounced off the rim.

The Yellow Jackets (14-17, 6-12) led by eight with eight minutes remaining, but N.C. State guard Markell Johnson scored 12 of his team-high 17 points in 3 ½ minutes to give the Wolfpack a chance to win. With N.C. State trailing by two, Johnson was well-guarded as he maneuvered on the baseline.

But he found teammate Torin Dorn open on the wing for a 3-pointer that put N.C. State ahead 61-60 with 5.5 seconds left. Then Pastner called a play for Alvarado and watched him deliver the win.

"The play we drew up was really good and I got up to full speed," Alvarado said. "I just made a play that I saw open and it went the right way."

After committing 12 turnovers in the first half and trailing 31-26 at halftime, the Yellow Jackets took better care of the ball in the second half. Georgia Tech committed just four turnovers after halftime and shot 58.1 percent from the field as Banks and Raleigh native Moses Wright, who scored 18 points, delivered points in the low post with a combination of skill and power.

Banks made all eight of his field goal attempts and also grabbed nine rebounds and blocked five shots. And he and Alvarado combined for a perfect play when the team needed it most. Alvarado drew a defender and passed to Banks, who delivered the dunk while being fouled.

"We executed our assignments," Pastner said. "We did our job. We talk about discipline all the time, knowing our job and doing our job. And we had good discipline. Jose made a good decision not to pull up. He kept attacking the basket, and then found James."

N.C. State was held to 31.9 percent from the field as normally sure-shooting guard Braxton Beverly shot 0-for-8, including 0-for-7 from 3-point range.

"It's unfortunate because we had a great opportunity here," N.C. State coach Kevin Keatts said. "And obviously we didn't get it done."

Georgia Tech: Winning three of the last five games was a good way to finish the regular season after previously suffering through a seven-game losing streak. Posting their first win away from home since Jan. 12 should give the Yellow Jackets some optimism and confidence heading into the ACC Tournament.

N.C. State: Losing at home to an opponent that has struggled for much of the season won't help N.C. State's NCAA Tournament hopes. Keatts said he didn't know what effect the loss would have on the Wolfpack's chances for an at-large bid. "I don't think anybody knows," he said.

Georgia Tech's unselfish play was illustrated by its 17 assists on 25 field goal attempts. That means more than two-thirds of the Yellow Jackets' field goals — including the last one — were assisted.

Georgia Tech: Has the weekend off before meeting an opponent to be determined Tuesday in the ACC Tournament.