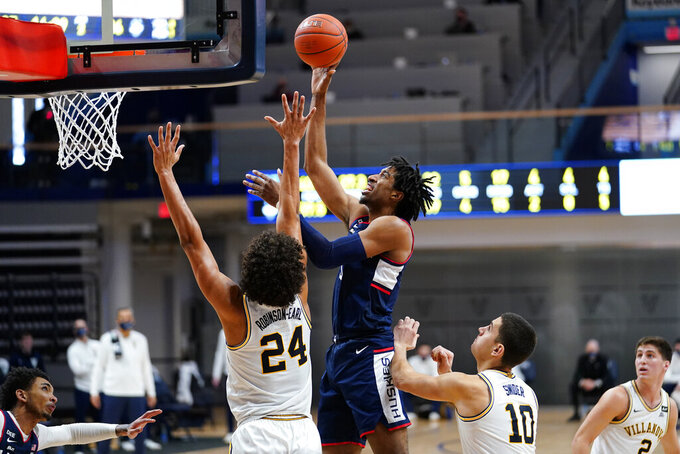 Connecticut's Isaiah Whaley, center, goes up for a shot between Villanova's Jeremiah Robinson-Earl, left, and Cole Swider during the second half of an NCAA college basketball game, Saturday, Feb. 20, 2021, in Villanova, Pa. (AP Photo/Matt Slocum)

VILLANOVA, Pa. (AP) — Villanova had an easy fix for its recent defensive struggles — just practice it.

Collin Gillespie scored 20 points and Jeremiah Robinson-Earl had 17 points and 11 rebounds to lead the No. 10 Wildcats to a 68-60 victory over UConn on Saturday.

Justin Moore and Jermaine Samuels each added 11 points for the Wildcats (14-3, 9-2 Big East), who clamped down defensively in the second half.

James Bouknight, in his second game back after missing eight due to elbow surgery, scored 21 points for the Huskies (10-6, 7-6).

Villanova was coming off its worst defensive performance of the season in last Saturday’s loss at Creighton, a game in which the Wildcats gave up a season-worst 86 points while allowing the Bluejays to shoot 59% from the field. That defeat dropped the Wildcats five spots in the Associated Press Top 25.

With a week of practice to prepare for UConn, coach Jay Wright put most of the emphasis on defense.

“We didn’t allocate enough time to defense,” Wright said of previous sessions. “It shows what you emphasize, they’re going to be good at.”

The Wildcats held UConn’s star, Bouknight, to seven points in the second half as the Huskies shot 30% (8 for 27) from the field and committed seven turnovers after halftime. It took until 34.7 seconds remained for Bouknight to make a second-half field goal.

“They did a good job of loading up on whoever had the ball and trying to make plays,” Bouknight said. “They’re a very good team defensively. We were just a step slow, and we made too many mistakes.”

A projected first-round NBA draft pick this year, Bouknight had 18 points in 24 minutes in Tuesday’s 73-61 win over Providence in his return. He came out hot, scoring nine of UConn’s first 12 points and ended up with 14 in a competitive opening 20 minutes that ended with the Wildcats ahead 34-32.

Villanova kept UConn and Bouknight in check the rest of the way.

“They were really loading up to James,” Huskies coach Dan Hurley said. “The ball can’t just end up in James’ hands trying to bail us out. Collectively, we have to have a better approach.”

And the advantage hit double digits, 57-47 with 4:25 left, on Moore’s dunk after an assist from Gillespie.

When the Huskies got close, Villanova always had an answer.

“This is one of the best teams in the country, the class of our league,” Hurley said. “Their mindset is championship level.”

BACK IN THE BIG EAST

The teams renewed their Big East rivalry. A charter member of the conference in 1979-80, UConn spent the last seven seasons competing in the American Athletic Conference.

While the Huskies were gone, Villanova dominated the conference and rose to a consistent national championship contender. The Wildcats claimed six regular-season conference titles over those seven seasons while capturing NCAA titles in 2016 and 2018.

UConn, which shares the Big East record with Georgetown for conference tournament titles with seven, dropped off its usual level among college basketball’s elite.

The teams also were supposed to meet in Storrs, Connecticut, in January, but twice had games postponed due to COVID-19 issues.

UConn: The Huskies are on the NCAA bubble but are in good position to get a first-round bye in the Big East tournament, which goes to the top five teams in the league standings. UConn entered fourth in the conference, two games ahead of sixth-place Xavier, with four scheduled conference games remaining.

Villanova: The Wildcats are primed for a top seed in the NCAA Tournament, but Wright knows they’ll have to play better. They have four regular-season games remaining to get to the level Wright would like to see.

“Our habits and concepts, we’re not where we normally would be,” Wright said prior to the game. “We have a long way to go defensively.”

Saturday’s win was a start.

UConn: At Georgetown on Tuesday night.