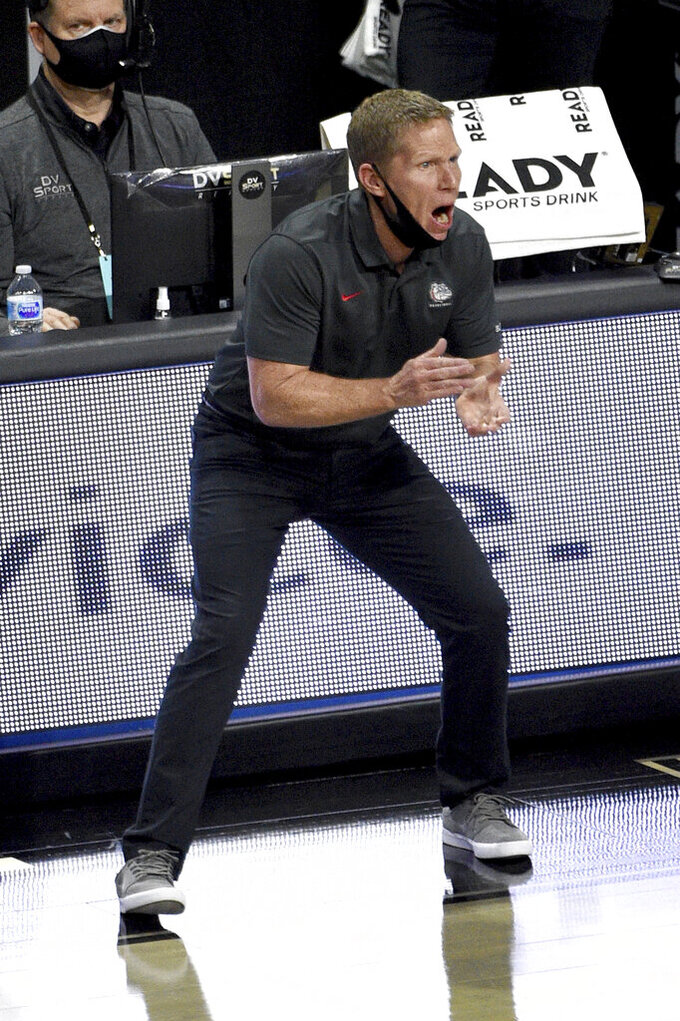 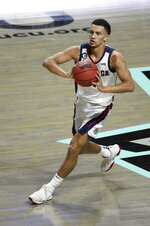 INDIANAPOLIS (AP) — As Gonzaga guard Joel Ayayi dribbled to the top of the key, teammate Andrew Nembhard faked a down screen and flared to the corner.

Bulldogs big man Oumar Ballo, after skirting past Nembhard, ran up to set a screen for Ayayi and rolled toward the basket. The defense played the pick-and-roll perfectly, giving Ayayi no room to shoot, Ballo no space to receive a pass.

Instead of resetting, Ayayi noticed the defender in the corner had slid down to help on Ballo, so he whipped a pass to the corner. Nembhard knocked down an open 3-pointer.

“They are really good at their reads,” said Jordan Sperber, owner of Hoop Vision, a basketball site focused on analytics and tactics. “With four guys who can pass like that out of ball screens, no one really has that.”

These Zags have become an offensive juggernaut like few have witnessed before.

Annually among the nation's most efficient teams, Gonzaga plays offensive basketball like a Formula One driver: fast but controlled, seamlessly able to read and react, adaptable when things break down.

The Zags have raced through an undefeated season into the NCAA Tournament by attacking Virginia's pack line defense, withstanding West Virginia's bully ball and navigating Kansas' heft inside.

Top-seeded Gonzaga (26-0) has won every game except one by double digits and its adjusted offensive efficiency of 126.1 is on pace to be the highest in the history of the KenPom.com ratings. The Zags are scoring 92.1 points per game, most since Virginia Military Institute put up 95.6 in 2007.

Coach Mark Few has spent 22 years crafting a read-and-react offense that's nearly impossible to shut down and has the perfect combination of players to orchestrate it.

“He coaches a brand of unselfish basketball,” ESPN college basketball analyst and former coach Seth Greenberg said. “They play a certain way. The identity of Gonzaga basketball has been created for 20 years. They play fast, they play aggressive, but they’re extremely unselfish."

So how do the Zags do it?

They recruit players who fit their system, not necessarily the ones with the most stars in their ratings. They play fast yet controlled, racing off for layups and 3-pointers before the opponent has time to set up.

They always seem to have continuity in the roster — as continuity goes in college basketball — so the players know what to do and can show the new ones how to do it.

They're disciplined, have been drilled to know not only Plan B when a play breaks down, but plans C and D, too.

“We encourage ball movement, getting to second actions,” said Tommy Lloyd, in his 20th season as an assistant to Few. “We actually don’t run a lot of plays. It’s really just guys playing within a framework that we practice a lot. There’s a ton of freedom with that and the players have to make the decisions and we hold them accountable for making those decisions.”

The Zags create opportunities with their defense — opponents' turnover rate is 20.3% — and by defensive rebounding, even the guards. Once the ball is secured, they hit the gas the other way, the guards looking to pass ahead at every opportunity.

An average Gonzaga possession lasts 14.1 seconds and the Zags are playing at the fastest level since 1999-2000, according to the KenPom adjusted tempo metric.

“There's just something that team has,” Sperber said. “They quickly turn, like a defensive rebound, into an open shot for someone.”

In half-court settings, Few has adapted the offense to personnel.

When Gonzaga reached the 2017 national championship game, it was one the national leaders in post-ups, running the offense through adept-passing 7-footer Przemek Karnowski.

This year's team is filled with players who can pass and shoot, along with a multidimensional big man in Drew Timme, so the offense is based on motion and ball screens.

The core of the returning roster know Few's system inside and out, and newcomers Nembhard and freshman Jalen Suggs have high basketball IQs, so Few has given them more freedom to read and react.

“We try to do the best shot of teaching our guys to make good decisions,” Lloyd said. “We want them to be very aggressive, but to have plan Bs so we don’t get a bunch of all or nothing plays.”

Gonzaga rarely comes up with nothing. It could end up winning everything because of it.