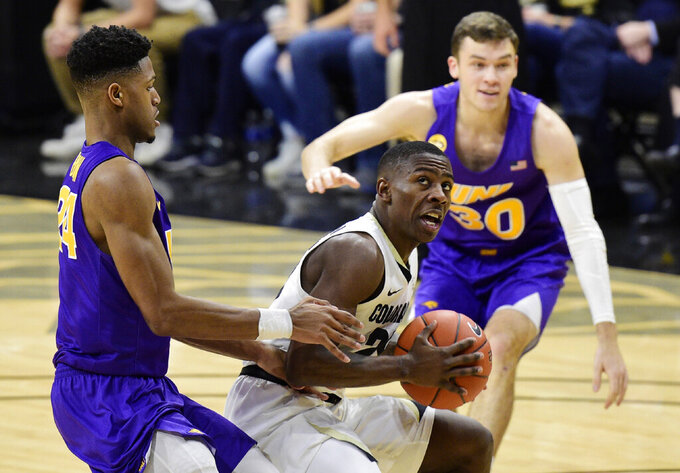 Haldeman stole a pass and raced down the floor for a tiebreaking layup with 49 seconds remaining, and Northern Iowa hung on to beat No. 24 Colorado 79-76 Tuesday night.

Northern Iowa set up the play by putting a double-team on Colorado point guard McKinley Wright IV, whose attempt to pass out of the trap was picked off by Haldeman.

"We hadn’t done it throughout the game at all and we thought that would be a good time to kind of throw them off and throw something different at them and it worked," Haldeman said. "I was thinking just make the play, just execute and finish the layup."

Wright said he should have called a timeout rather than make the hasty pass.

"We had a set call and they double-teamed me off the ball screen," Wright said. "I was trying to hit the short roller and their backside came up to help and jumped the pass. I should have just kept it and called timeout."

Northern Iowa defeated a ranked team for the first time since topping No. 25 Wichita State 53-50 on Feb. 13, 2016. The Panthers had lost their previous seven encounters against ranked opponents.

AJ Green and Trae Berhow had 20 points apiece to lead Northern Iowa (9-1), which has won three straight since losing to West Virginia.

Haldeman then stepped in front of Wright's pass and broke away for the go-ahead basket. After Green added a free throw, Colorado's Shane Gatling and Lucas Siewert both missed tying 3-point tries in the final seconds.

"Tonight that was a terrific team, and our guys learned that we are capable against one of the best teams in the country," Northern Iowa coach Ben Jacobson said. "I just thought the guys dug in the last three minutes when it felt like it was going back to Colorado. They answered the bell."

Leading by a point at the break, the Panthers went on an 11-0 run to start the second half. The Buffaloes got back in the game with a 9-0 burst.

Evan Battey converted a three-point play to put the Buffaloes up 62-60 with 6:41 remaining, but Green and Berhow connected on 3-pointers.

The Panthers led by five points after a layup by Justin Dahl with 3:10 remaining but Wright hit a 3-pointer and Battey muscled in a layup, was fouled and made the free throw as part of 8-0 run that put the Buffaloes in front 76-73 with 1:39 left.

Berhow was benched after drawing a technical foul midway through the first half for taunting the Colorado bench after hitting a 3-pointer. Some of his assistants prevailed on Jacobson to let Berhow back in the game and he wound up playing a huge role in the second half, when he hit four of his five 3-pointers.

"I was done with him," Jacobson said. "He’s lucky he had a bunch of assistant coaches stick up for him. I wasn’t going to play him in the second half. He’s gonna learn and it doesn’t happen again. He came back and came through for his team. He played great in the second half."

Northern Iowa: The Panthers, prolific 3-point shooters, made better than half of their shots from beyond the arc (14 of 26), and that was enough to fend off a Colorado team that had leaned on its defense to get off to a solid start.

Colorado: The Buffaloes’ hallmark early this season has been defense, but they let down on the perimeter, leaving themselves vulnerable to Northern Iowa's prolific 3-point shooters.