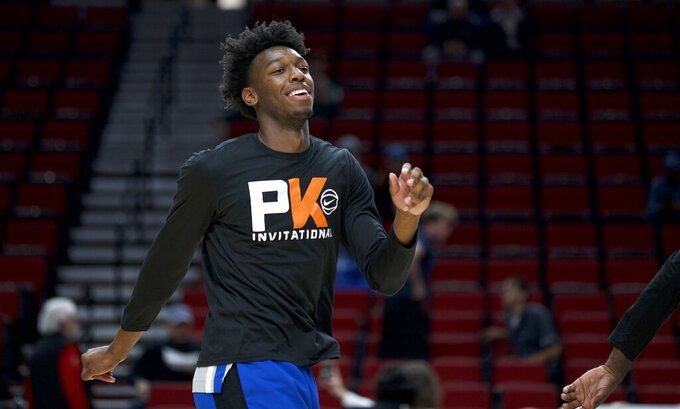 “That would be ideal,” Hardaway said Friday.

That seems unlikely with 13th-ranked Memphis playing its next game Saturday, hosting Alcorn State just over 48 hours after Wiseman told his attorneys to withdraw his lawsuit against the NCAA and Memphis. The university ruled the 7-foot-1 center ineligible and is working with the NCAA to resolve his eligibility.

"When you find out, you let me know," Hardaway said when asked about a possible resolution. "We are still waiting on Isaiah Stokes' (transfer waiver from Florida). So we're just in limbo right now.”

Hardaway said Memphis hasn’t heard anything about when this situation could be resolved to get Wiseman back on the court. But the coach also made clear Memphis supports Wiseman.

"We obviously understand the difficulty of an 18-year-old going through this, and the NCAA has a job to do, but at the end of the day we support what James, his family and his representation have to do."

Reinstatement likely means the freshman will have to sit out a handful of games. He played in the first three games of the Tigers’ season, including two under a temporary restraining order before withdrawing the lawsuit.

The NCAA first ruled Wiseman eligible in late May, according to his now-dropped lawsuit.

Then the NCAA sent Memphis a letter saying Wiseman was likely ineligible for receiving what the governing body deemed impermissible benefits. Wiseman’s family got $11,500 in moving expenses in 2017 from Hardaway, before the former NBA star became Memphis’ coach. Hardaway counted as a booster because of a $1 million donation for the university’s sports hall of fame in 2008.

Wiseman hasn’t been able to comment on the situation. Hardaway said the 18-year-old center is hurt that someone is trying to take games away from him.

“All he wants to do is play basketball,” Hardaway said. “He tells the players and has told me plenty of times through this entire process that he's happy for his brothers and his family, and 'We'll get past this.' James is a very brilliant kid. He understands what's going on, but it still hurts."

Memphis (2-1) hosts Little Rock on Nov. 20, then Mississippi on Nov. 23 followed by a game against North Carolina State in Brooklyn, New York, on Nov. 28. Bradley visits on Dec. 3. The Tigers’ biggest game on their nonconference schedule comes Dec. 14, a visit to in-state rival Tennessee.

Hardaway and the Tigers played without Wiseman during some exhibitions in the Bahamas in August. Precious Achuiwa helped fill in at center then. Hardaway doesn’t plan to do that this time around.

“We’re going to have to ask Lance Thomas and Isaiah Maurice to really step it up at the five-spot,” Hardaway said. “Because we kind of want to keep Precious at his regular position. If we have to (have Achuiwa) go to the five, that just means we’re desperate to do that.”