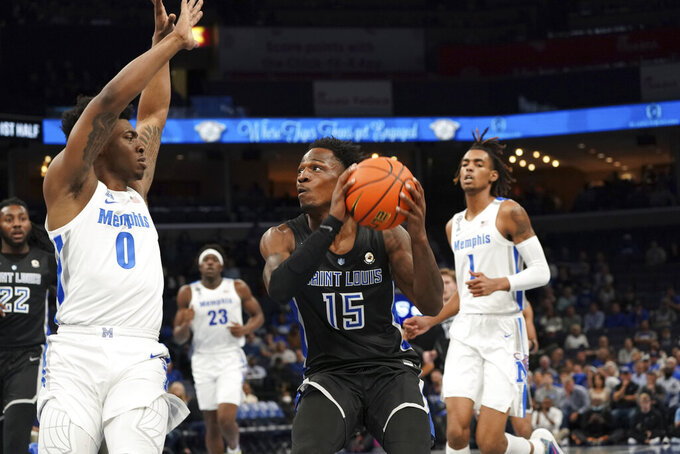 St. Louis' Jordan Nesbitt (15) goes up for a shot as Memphis' Earl Timberlake (0) defends in the first half of an NCAA college basketball game Tuesday, Nov. 16, 2021, in Memphis, Tenn. (AP Photo/Karen Pulfer Focht)

MEMPHIS, Tenn. (AP) — Tyler Harris had 18 points and Emoni Bates scored 16 as No. 11 Memphis remained undefeated with a 90-74 win over Saint Louis on Tuesday night.

Jalen Duren added 13 points and Josh Minott finished with 12, both going perfect from the field.

Harris turned on the Tigers' offense about the time the Billikens went to a zone defense in the first half.

He had signed Memphis out of high school, transferred to Iowa State for one season and returned to the Memphis program this year. Hardaway made no promises to Harris on his return because of the deep talent on the Memphis roster, but on Tuesday, he said he was “really proud” of Harris.

“Not for any other reason but because he did what he always does,” Hardaway said, adding that he told Harris, “I’m going to find a way to get you on the floor because I know you are a points-per-minute guy and you’re a weapon.”

Terrence Hargrove Jr. led Saint Louis (3-1) with 20 points and 11 rebounds, while Marten Linssen scored 11 points before fouling out in the second half. Francis Okoro grabbed 13 rebounds for the Billikens.

The Billikens posed the biggest challenge of the young season for the Tigers (3-0). And while the Saint Louis defense caused some Memphis problems, the Tigers matched the physical play, particularly with their press.

“It’s really hard to simulate what they do,” Billikens coach Travis Ford said of the Tigers' length and pace. “I’ve watched both games they played multiple time, and I’m thinking now that didn’t do me much good because that (type of play) is a whole different deal. Those guys fly around.”

Both teams entered the game shooting 55% from the field and better than 41% from 3-point range. But against the Tigers, Saint Louis was limited to 31% shooting, including making only five of its 22 3-pointers.

Memphis turned up the defensive pressure, leading to 10 Billiken turnovers and 26% shooting in the first half. Saint Louis missed five of its six 3-pointers.

Memphis stretched the lead to 42-27 at the break, with Harris providing a spark off the bench with 11 points, connecting on all four of his shots. At one point during his shooting streak, the Memphis crowd rose to recognize the hometown product.

“It felt really good to be out there making shots, helping my teammates and coming in to contribute,” Harris said. “I was just out there having fun. … I feel like I’ve been trying to do that all season, and everything has been working out for me.”

Once the Tigers got the lead to double digits, Saint Louis never got close enough to really pose a threat.

Ford said the game was a nice test for his team to determine where they are, and he saw some positives, like 23 offensive rebounds.

“I consider this a great team,” Ford said of Memphis. “They will be. By the end of the year, they’re going to be hard to deal with. That’s a special team. We just didn’t play that well, and a lot of that had to do with them.

Memphis recorded 14 blocks, one short of the school record of 15 on three different occasions. One of the other times the Tigers had 14 blocks was against Saint Louis on Feb. 7, 2004. Duren had six of the blocks Tuesday night and Landers Nolley had three.