Hartford players sticking it out during transition to DIII 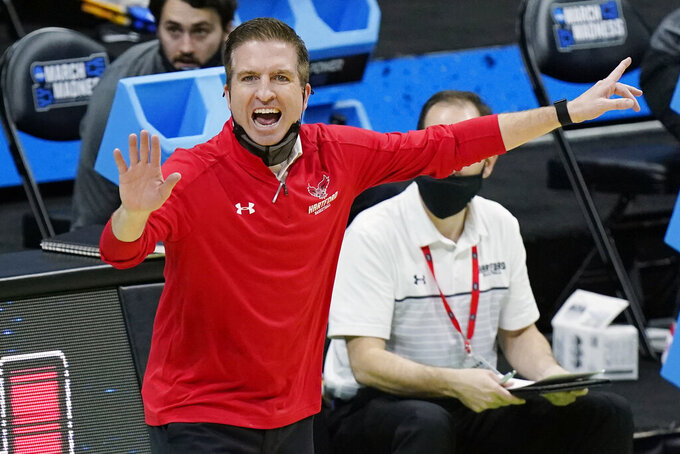 FILE - Hartford head coach John Gallagher yells to his players during the second half of a college basketball game against Baylor in the first round of the NCAA tournament at Lucas Oil Stadium in Indianapolis Friday, March 19, 2021, in Indianapolis, Tenn. The University of Hartford men's basketball team is hoping to make a run at a second straight NCAA Tournament, even as the school moves forward with plans to downgrade the program to Division III. (AP Photo/Mark Humphrey, File

WEST HARTFORD, Conn. (AP) — Hartford coach John Gallagher sat his team down last season after the school’s first NCAA Tournament appearance to talk about a decision the university had just made to downgrade its athletic programs from Division I to Division III.

Though the change, which the school says will save it about $9 million a year, won't happen right away, the coach told his returning players that he understood if they wanted to transfer.

None of them did.

Hartford, which joined Division I in the mid-1980s, plans to submit a formal request to the NCAA for reclassification in January. It intends to stop offering athletic scholarships before the 2023-24 school year and hopes to complete the transition by Sept. 1, 2025.

Gallagher's players say there were several reasons they decided to keep playing at Hartford, including that their coach told them he wasn't going anywhere.

They also think they have a chance to have another successful season, to add another America East title and maybe even change some minds about downgrading the program.

“We're doing it for each other and we're definitely doing it for the students, so we can show them that this fight isn't over yet,” said Austin Williams, a fifth-year senior who averaged 14.1 points and 6.2 rebounds last season. “We're going to keep on pushing and try to show the school that athletics are important.”

Senior guard D.J. Mitchell acknowledged that he initially had some mixed feelings about putting on a jersey for a school whose leadership pulled the rug out from under the athletic department.

But he said the greater university community — the alumni, the fans and even the athletes that will come after him — deserve to get everything he has to offer on the court.

“There's people who have been supporting this school for years and we're doing this for them,” he said. “That's the neighborhood that coach Gal talks about. I personally and all my teammates I know are going to do whatever we can to make sure it doesn't happen and things go back to the way we think it should be.”

The team finished last season 15-9 and won its conference tournament before losing as a 16 seed, 79-55, to eventual national champion Baylor in the first round of the NCAA Tournament.

The Hawks will raise their conference championship banner at home on Nov. 18 against Boston University.

They are picked to finish fourth in the conference this season but return a strong core from last year's team as well as several newcomers, including transfer DeJuan Clayton, who scored 1,518 points at Coppin State.

“Seven of the guys next year are going to be recruited at the SEC, Big East, Big Ten level,” Gallagher predicted.

The coach said he's hopeful that a court challenge or pressure from alumni might keep his program at the Division I. But he said he has no plans to leave the school, at least not yet.

“We're a long-game program,” he said. “If we stay Division I, the next 10 years will be historic here. And if we have to pack our bags and move the neighborhood somewhere else, it's going to be historic there.”