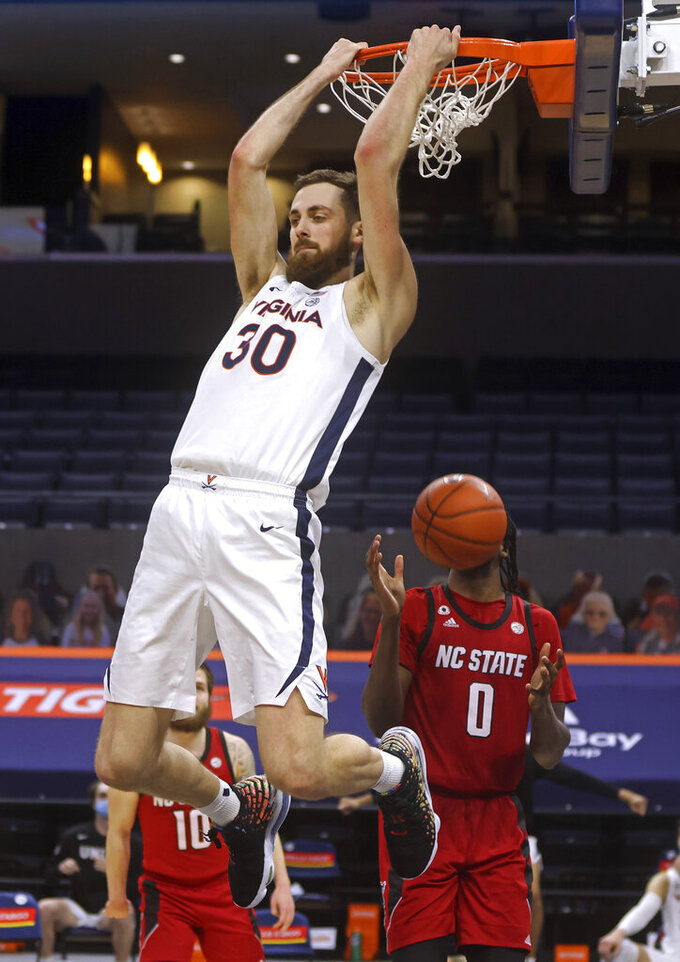 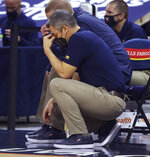 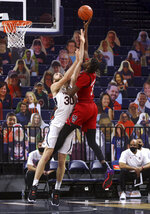 CHARLOTTESVILLE, Va. (AP) — Three consecutive Atlantic Coast Conference road wins against teams in the lower half of the standings looked great, but perhaps not convincing, for North Carolina State.

It was at No. 15 Virginia on Wednesday night where they turned some heads.

DJ Funderburk scored nine of his 14 points in the second half and the Wolfpack opened a big lead and held off every challenge the Cavaliers had to offer in a 68-61 victory.

The road wins — at Boston College, Pittsburgh and Wake Forest — were sandwiched around home losses to Syracuse and Duke, and Wolfpack coach Kevin Keatts praised his young team's ability to bounce back from adversity.

“I’ve asked them to grow up a little quicker than they needed to, but we’ve completely bought in,” he said. "When you look at it, the ball moves from side to side, everybody’s playing their role, everybody is genuinely happy for one another.

“And typically you don’t get that in a team. And I think in order for us to be a really good basketball team, we don’t have that one guy on every night that can score 30 points.”

The Cavaliers twice closed within five, the second time at 54-49 on Hauser’s third 3-pointer with 3:40 left, but Hayes barely beat the shot clock and banked in a desperation 3-pointer from the top of the key to push the lead back to eight.

Two free throws by Huff made it 57-53, and back-to-back 3s by Hauser brought them within 65-61 with 18 seconds left. But Dereon Seabron hit a free throw and Hayes hit two more to finish it off. NC State made 15 of its last 17 free-throw attempts.

Cavaliers coach Tony Bennett said it's common for teams to endure tough stretches, but “we haven’t become gritty enough or tough enough to lean on our defense to hold us in there. We did it a couple times this year, but not consistently enough,” he said.

The Wolfpack led 17-4 after nine minutes, but Virginia used a 13-4 run to close within 25-21 two minutes before halftime. The Cavaliers took their first lead at 35-33 on two free throws by Huff with 14:31 remaining, capping a 12-4 spurt that started with consecutive 3-pointers by Hauser from in front of the Cavaliers' bench.

But N.C. State steadied itself, getting four points each from Manny Bates and Moore and a 3-pointer from Braxton Beverly as it scored 12 of the next 14 points.

The Cavaliers twice closed within five, the second time at 54-49 on Hauser's third 3-pointer with 3:40 left, but Hayes barely beat the shot clock and banked in a desperation 3-pointer from the top of the key to push the lead back to eight.

Hayes, a freshman, has now scored in double figures in three straight games after doing it just twice before.

N.C. State: The Wolfpack are not known for being a lock-down defensive team, but for much of the first half, they combined smothering defense with hot shooting. N.C. State hit 9 of its first 13 shots in opening a 21-10 lead, but made just 3 of 12 the rest of the half.

Virginia: Facing a Wolfpack defense that was on them like Florida State had been in the Seminoles' 81-60 victory on Feb. 15, the Cavaliers trailed 17-4 after nine minutes and hit just five of their first 20 shots before getting a few to fall to close within 29-23 by halftime. They were 10 for 27 in the first half, 37%.

The Wolfpack is surging and Virginia is headed in the opposite direction and struggling, but this loss won't look as bad on paper because of the way N.C. State has played of late.

The Wolfpack returns home to face Pittsburgh on Sunday.

The Cavaliers remain at home and will face Miami on Monday night.