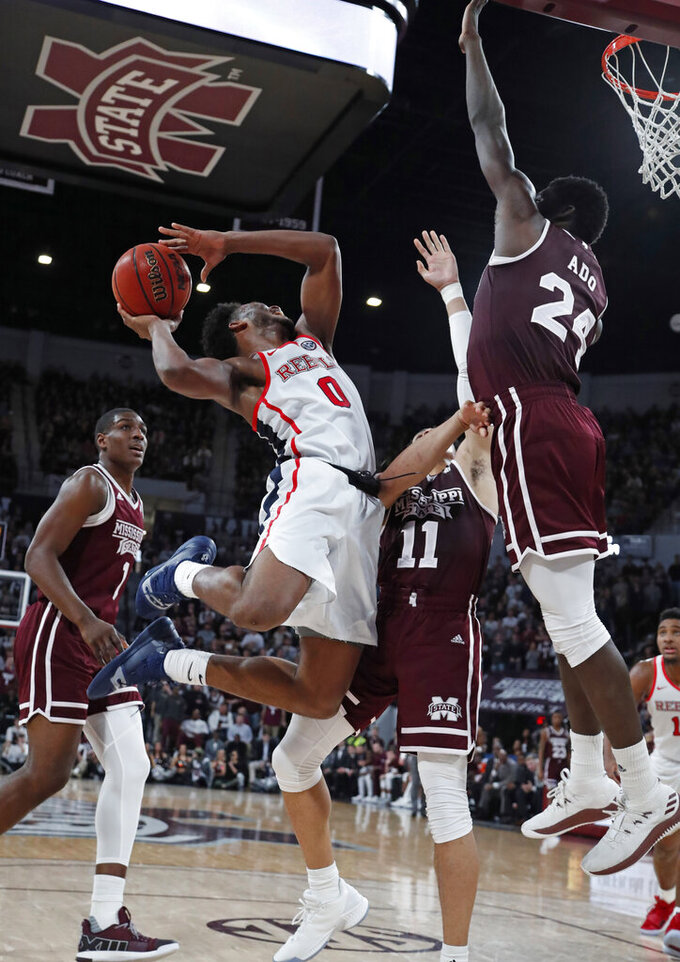 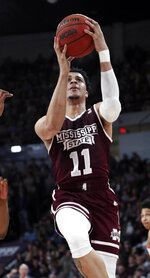 STARKVILLE, Miss. (AP) — Blake Hinson strolled onto his rival's home court, hit a few huge 3-pointers, scored a career-high 26 points and looked like he had the time of his life doing it.

If the Mississippi freshman had any nerves in a big Southeastern Conference road game, he sure didn't show it.

Hinson poured in basket after basket, Breein Tyree added 19 points and Ole Miss rallied for an 81-77 win over No. 14 Mississippi State on Saturday. With a wide grin and relaxed demeanor, Hinson acted like the breakout performance was something he does every day.

"It was super fun," Hinson said. "I love basketball, and this was a great basketball atmosphere. I was loving every part of it."

Mississippi State (12-3, 0-2) had a two-point lead at halftime and stretched that advantage to 48-39 in the opening minutes of the second half. But the Rebels wouldn't go away — Hinson hit three straight 3-pointers at one point — and Ole Miss pulled ahead 70-62 with seven minutes left.

"We did obviously a horrible job on Blake Hinson," Mississippi State coach Ben Howland said. "We knew what he was. He's a 3-point shooter. He really got going."

The Bulldogs would rally, and Nick Weatherspoon hit a 3-pointer with 1:22 left to tie it at 77. The Rebels finally went ahead for good when Tyree made a driving layup with about 50 seconds left, quieting a Humphrey Coliseum crowd that topped 10,000.

The 6-foot-7 Hinson made 8 of 16 shots, including 5 of 11 from 3-point range. Terence Davis added 12 points. Tyree had a good game — and hit some clutch shots in the final minutes — despite a left shoulder injury early in the contest that kept him off the court for a few minutes.

"In a game like that," Tyree said. "Adrenaline takes over. While I was on the court, no pain."

Mississippi State used a 14-0 run midway through the first half to take a 32-21 lead, but Ole Miss closed the gap to 41-39 by halftime. Quinndary Weatherspoon had 11 points in the first half for the Bulldogs. Hinson and Devontae Shuler both scored 10 for the Rebels.

It was a rowdy atmosphere at Humphrey Coliseum for one of the best games between these rivals in a decade. That passion sometimes turned into shenanigans — Ole Miss earned three technical fouls while Mississippi State had one.

Kermit Davis had a lot of good things to say about his team after Saturday's win, but he wasn't happy with that development.

"We deserved it," Davis said. "I apologize. I haven't had player technicals in a long, long, long time. ... You've got to compose yourself. That's on me. We'll get that one fixed."

"Some things run through your mind as a kid who grew up in this building," Davis said. "It was a little strange early, but when the ball tips, you're just coaching like mad for your players."

Ole Miss: The Rebels were picked to finish last in the SEC this season, but that looks very unlikely at this point. Hinson picked a great time to have a big game, and the rest of the Rebels were tough in a very loud road environment.

Mississippi State: It's another tough loss for the Bulldogs, who looked great during nonconference play but have dropped two straight in the league. Mississippi State has to get its defense back in order if it's going to be a factor in the SEC race.