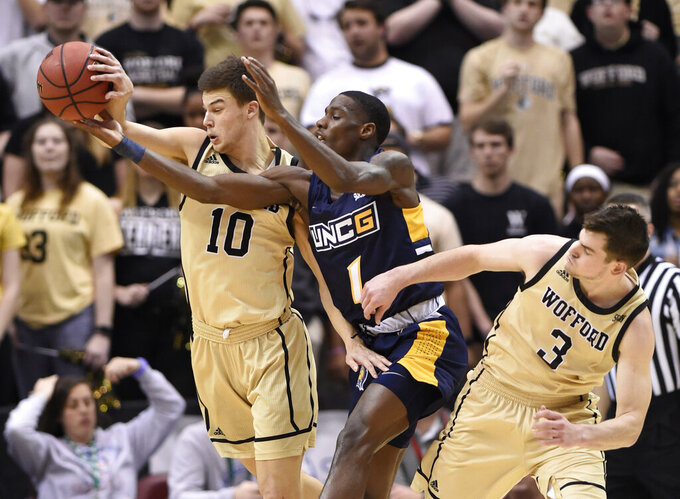 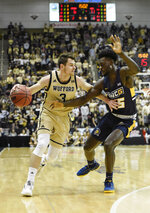 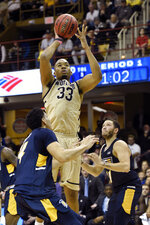 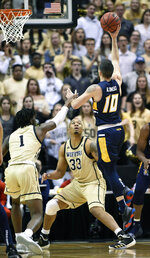 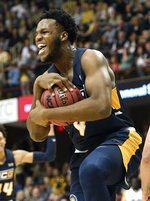 ASHEVILLE, N.C. (AP) — Nathan Hoover is the guy who never stops competing in Wofford practices regardless of the situation.

That feistiness carried over to the Southern Conference Tournament championship game on Monday night.

The junior guard scored all 20 of his points in the second half on 5-of-6 shooting from the field and went 8 of 8 from the foul line as No. 20 Wofford battled back to defeat UNC Greensboro 70-58 to win the tournament title and earn an automatic berth in the NCAA Tournament.

"That's the way I grew up — whatever you do, you do with all you got," Hoover said. "I'm a very emotional person, and I know when I get that way I can get the fans and my teammates fired up. And when I do I know we are very tough to beat."

Tournament MVP Fletcher Magee also scored 20 points and Cameron Jackson had 15 points and seven rebounds as Wofford (29-4) completed a perfect season against conference foes, going 18-0 in the regular season and winning three games in three days in the tournament.

It's the fifth time in 10 seasons that Wofford will play in the NCAA Tournament — and coach Mike Young knows this is his most talented team.

"This is a really good basketball team," Young said. "Don't give me that mid-major stuff and all that garbage. This is what you see. This is a big, talented team that can score and I cannot wait to play again in that great, great tournament."

UNC Greensboro (28-6), which lost to Wofford by 30 and 29 points in the regular season, led most of the game and was hoping to pull the upset and steal a tournament berth from a bubble team.

But the Spartans couldn't hold the lead.

UNC Greensboro led 55-50 with 5:41 left before the Terriers went on a 16-0 run, holding the Spartans without a basket for more than 4½ minutes.

Hoover brought the Terriers back on two different occasions with individual 8-0 runs.

He scored eight straight points to give Wofford its first lead at 50-49 with 12:30 left in the game.

Then, with his team down five, Hoover made a floater, a 3-pointer and three foul shots to put Wofford up 58-55 with 3:23 remaining. A minute later he got a crucial steal in the frontcourt and converted two foul shots to put the Terriers up by seven.

"Some guys had brain farts in the second half and (Wofford) executed off of that," Miller said of the Spartans' late collapse.

Young said Hoover was his player of the game.

"He put us on his shoulders when you get right down to it," Young said.

Hoover said he took advantage of open looks created by the Spartans because they were paying so much attention to Magee and Jackson.

"I was able to get open shots and they went down," Hoover said. "It just boosted everything."

The Spartans didn't help themselves by shooting 3 of 16 from 3-point range.

Wofford, conversely, was 7 of 23. But what hurt the Spartans just as much is they fouled the Terriers three separate times on 3-point attempts and Hoover and Magee made them pay by making all nine free throws.

"You're trying to contest because they shoot it so well," said Spartans coach Wes Miller.

Magee finished with four 3-pointers, leaving him with 502 for his career — two behind the NCAA Division I all-time leader Travis Bader from Oakland. Magee will have a chance to break the record in the first round of the NCAA Tournament.

UNC Greensboro: The Spartans played a near-perfect game for 35 minutes but went cold down the stretch, perhaps the result of having a short bench. Alonso and Miller attacked the basket well, taking advantage of their playmaking ability. The Spartans have a terrific recruiting class coming in next season.

Wofford: The Terriers have won 20 straight games heading into the NCAA Tournament and on Monday claimed their highest AP Poll ranking in school history at No. 20. With a tough inside-out game and strong backcourt play, the Terriers will be a popular pick to advance in the NCAA Tournament.

UNC Greensboro: Will likely have to await a call from the NIT.

Wofford: Will play in the NCAA Tournament.