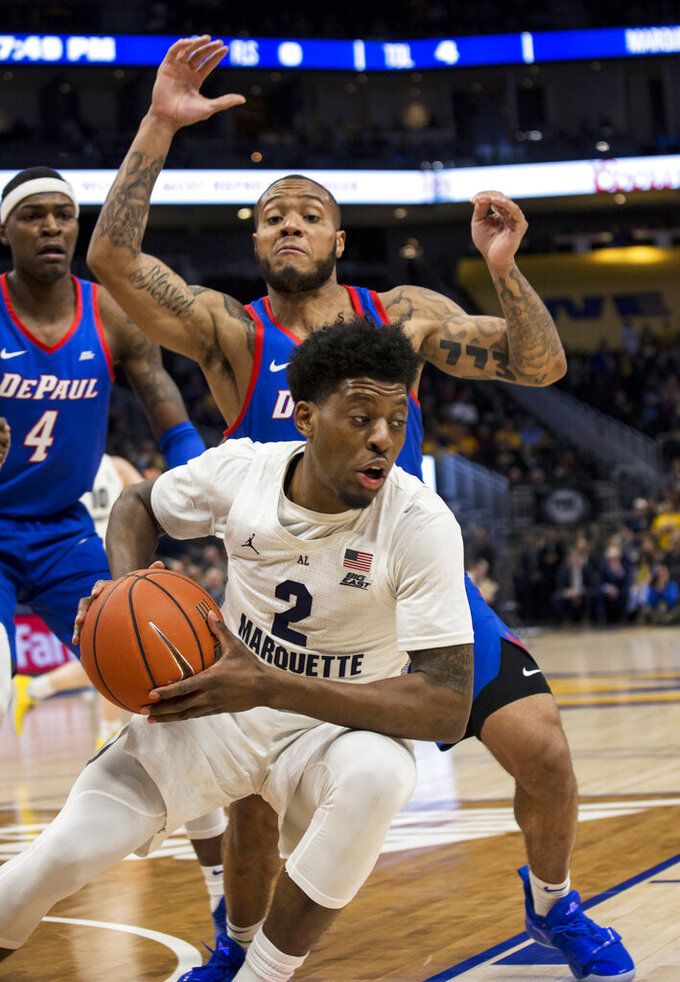 Marquette forward Sacar Anim, front, is defended by DePaul guard Devin Gage, back, during the first half of an NCAA college basketball game, Wednesday, Jan. 23, 2019, in Milwaukee. (AP Photo/Darren Hauck) 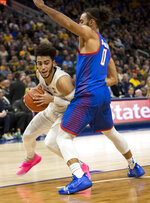 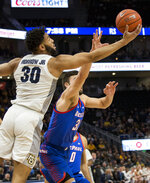 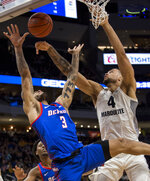 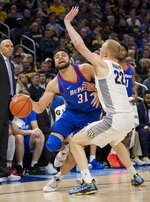 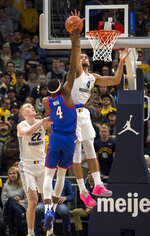 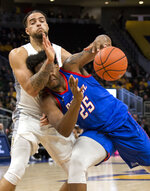 MILWAUKEE (AP) — Markus Howard found ways to score when Marquette needed it most.

Howard had 13 of his 23 points — including 11 free throws — in the final six minutes and Sam Hauser added 19 as the 12th-ranked Golden Eagles held off DePaul 79-69 on Wednesday night to remain unbeaten at home.

"He's kept me up since Saturday's game every night just trying to figure out how best to keep him off balance," DePaul coach Dave Leitao said of Howard. "I thought we did to a stretch, but again, his intellect came into play and he drew fouls, which as a 90 percent free throw shooter, he went 15 for 15, which is as admirable a talent as there is to speak of."

Howard then scored five consecutive points to trigger an 11-point run. Marquette extended the lead to 67-56 on two free throws by Hauser with 3:47 left. The Golden Eagles (17-3, 6-1 Big East) scored 17 of their final 23 points from the free throw line to improve to 14-0 at the new Fiserv Forum.

Howard, who entered first in the Big East and fifth in the nation in scoring at 24.4 points per game, was 4 of 10 from the field — including 1 for 3 in the second half. He went 0 for 2 from 3-point range but made all 15 free throw attempts. The star guard had nine assists and eight turnovers.

"We do need to be more balanced offensively and I thought we were tonight," Marquette coach Steve Wojciechowski said. "I really thought it started with Markus' passing to start the game. He really, I thought, made a concerted effort in the beginning of the game to share the ball. When he does that, it becomes contagious."

Theo John scored a career-high 16 points to go with 10 rebounds and six blocks for Marquette. Joey Hauser had 14 points.

"They're anything but a one-man group," Leitao said. "They're veteran, they've been around. Joey's the only freshman that joined the lineup, but he's very talented, so that's why he fits in well. They're seasoned, they know who they are. They've gotten tremendously improved on the defensive end, and then they have a will."

DePaul scored the first eight points of the second half, pulling to 40-35 on Reed's driving layup. John converted a three-point play at 16:20 for Marquette's first points after halftime.

Marquette finished the first half with a 20-6 run for a 40-27 lead at the break. The Blue Demons went more than 5½ minutes without a field goal until Lyrik Schreiner's 3-pointer with 30 seconds left made it 38-27.

DePaul hit seven of its first 13 shots but went 4 for 17 the rest of the half.

The Golden Eagles were sluggish early, making just six of their first 21 shots. The score was tied at 18 with 6:32 left in the half as Marquette had seven turnovers to just six field goals.

"I thought we got contributions across the board from a number of guys, which we knew we needed, because DePaul is playing very well," Wojciechowski said. "They're a much-improved basketball team and program. Our guys and our staff were very concerned about this game because of how well they're playing."

DePaul: After a three-game skid, the Blue Demons had won three of four coming in, including a victory at St. John's and two wins over Seton Hall. DePaul needs to win just four more games for its first winning regular season since 2006-07.

Marquette: Needs to continue showing improvement on the road. After dropping their first two road games, along with an NIT Season Tip-Off loss to Kansas, the Golden Eagles have posted a pair of narrow road victories, 106-104 in overtime at Creighton and 74-71 at Georgetown. Marquette's next two games are on the road at Xavier and Butler.

In games when Howard has played at least 10 minutes, this was just the sixth time in his career he did not make a 3-pointer. He entered with 72 in 164 attempts, both team highs.

DePaul is at Providence on Sunday.

Marquette is at Xavier on Saturday.