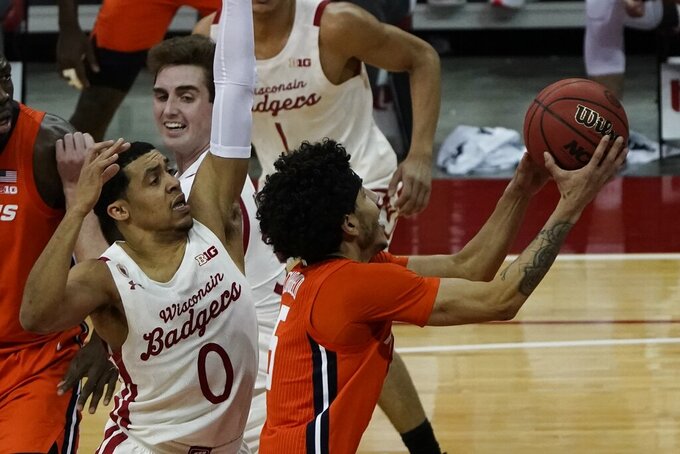 MADISON, Wis. (AP) — Kofi Cockburn scored 19 points and No. 5 Illinois held off Wisconsin to win 74-69 and complete its first regular-season sweep in this series since 2005.

After Wisconsin trailed by 13 points with less than three minutes left, D’Mitrik Trice nearly brought the Badgers all the way back by scoring 19 points in the final 2 minutes, 12 seconds. Trice’s 3-pointer cut Illinois’ lead to 70-69 with 6.7 seconds left.

After Illinois’ Trent Frazier sank two free throws with 5.7 seconds remaining, Illinois fouled Trevor Anderson with 1.9 seconds left before Wisconsin could attempt a tying free throw. An exchange of words near the Wisconsin bench followed that foul and resulted in offsetting technicals.

Anderson missed the next two free throws, then Grandison hit a pair of free throws to account for the final scoring.

Trice finished with 29 points and had all of Wisconsin’s final 19 points.

Andre Curbelo scored 17 points and Da’Monte Williams had 12 for Illinois, which won despite a season-high 20 turnovers. Micah Potter had 15 points for Wisconsin (16-9, 10-8 Big Ten).

Illinois (18-6, 15-4) was playing without All-American candidate Ayo Dosunmu, who missed a second straight game after breaking his nose Tuesday in an 81-72 loss at Michigan State. Dosunmu recorded a triple-double Feb. 6 in a 75-60 victory over Wisconsin and had another two weeks later in a 94-63 blowout of Minnesota.

The Illini won the rematch without Dosunmu by capitalizing on Wisconsin’s shooting woes.

Wisconsin took 17 more shots than Illinois in the first half but still trailed 37-26 at the break because the Illini were so much more efficient. Illinois shot 65% and went 4 of 6 from 3-point range in the first half, while Wisconsin shot 27% and was 3 of 14 from beyond the arc.

Illinois: The Illini have won their last three meetings with Wisconsin since snapping a string of 15 straight losses in this series. Playing its third game in five days, Illinois never trailed all day. The Illini nearly crumbled down the stretch but stayed in front by going 10 of 10 on foul shots in the final 44 seconds.

Wisconsin: The Badgers are shooting poorly, particularly against quality teams. Their only victory over a team currently in the Top 25 was a 77-63 triumph over Loyola Chicago back on Dec. 15. Wisconsin remains in good shape to make the NCAA Tournament, but it’s hard to imagine the Badgers staying there for long unless their shooting improves.

This marked the home finale for Wisconsin and created an unusual atmosphere. The Badgers tried to honor their seven while observing pandemic protocols. As each senior was introduced and received a framed jersey in a pregame ceremony, parents cheered from several rows up the stands in an otherwise empty Kohl Center.

Even after winning its last two games, Illinois still may drop a couple spots because of its loss to Michigan State. Wisconsin is in danger of falling out of the Top 25 for the first time this season.

Illinois: At No. 3 Michigan on Tuesday.

Wisconsin: At Purdue on Tuesday.