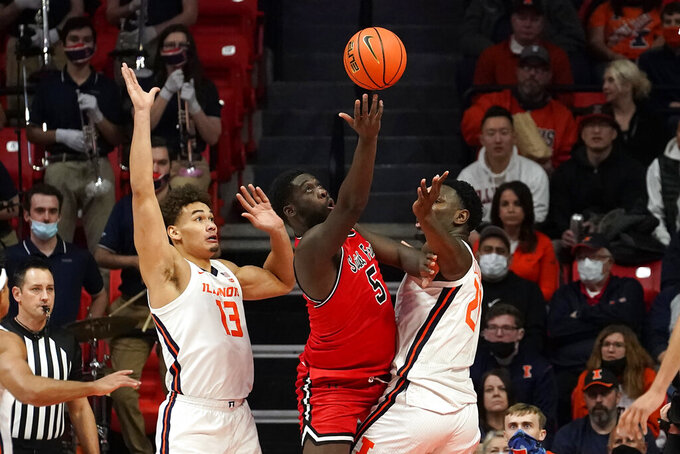 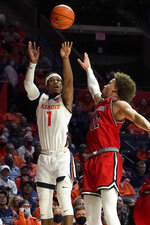 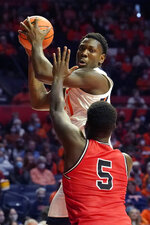 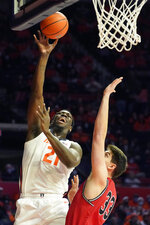 The 7-foot, 285-pound Cockburn had no rival in the paint, making 9 of 11 shots with four dunks and bringing an intimidating defensive presence inside against the Red Storm (4-6). His double-double was the 34th in his career.

Plummer just missed going over 20 points for the seventh straight game after hitting five 3-pointers and scoring all of his points in the first half when the Fighting Illini (8-3) took a 24-point lead. Grandison hit four from the arc in scoring 18 and going over 1,000 points for his career.

The Illini were 18 of 34 from the arc and shot 66% percent overall, dominated the boards 44-27 and outscored the Red Flash 40-16 in the paint. The bench scored 34 points. Illinois went over 100 points for the first time since making 17 3-pointers and scoring 122 points versus North Carolina A&T in November 2020. This was the fifth straight game Illinois has made at least 11 3-pointers.

Grandison hit two 3-pointers to open the second half and the Fighting Illini went on to lead by 34 by the first media timeout. Consecutive dunks by Cockburn began a 27-3 run that resulted in a 54-point lead with 5 1/2 minutes left.

Illinois won for the sixth time in its last seven games after coming off a four-point loss to then-No. 11 Arizona. The Illini take on Missouri in St. Louis on Wednesday.

By Hank Kurz Jr. 25 minutes ago
By Pat Eaton-Robb an hour ago
an hour ago
2 hrs ago
By Michael Marot 2 hrs ago