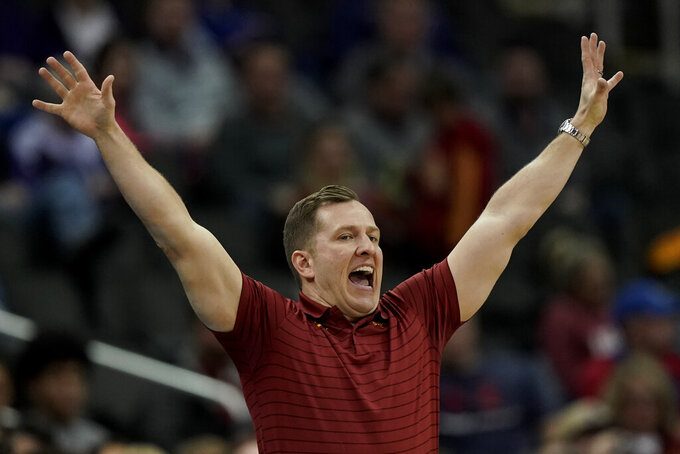 Iowa State head coach T.J. Otzelberger motions to his players during the first half of an NCAA college basketball game against Texas Tech in the quarterfinal round of the Big 12 Conference tournament in Kansas City, Mo., Thursday, March 10, 2022. (AP Photo/Charlie Riedel)

Iowa State's road from two wins all the way to the NCAA Tournament was paved by work. Lots of work on multiple fronts.

The result is a historic turnaround that arrives at the second round of the NCAA tourney when Iowa State takes on Wisconsin on Sunday night. The 11th-seeded Cyclones held off LSU for a 59-54 win Friday night, and the third-seeded Badgers advanced with a 67-60 victory over Colgate.

Enter T.J. Otzelberger, who was hired away from UNLV to take over a program that had been like a second home to him. Otzelberger, 44, had two stints as an Iowa State assistant before he became a college head coach for the first time at South Dakota State. His wife, Alison, was a three-time All-Big 12 pick for the Cyclones.

“I love Iowa State. I want us to do really well, and we put a model in place that will withstand the test of time for us to be successful for many years moving forward.”

Brockington, the Big 12 Newcomer of the Year, is averaging a team-best 17.3 points and 7.0 rebounds per game. Hunter, who scored 23 points in the victory over the Tigers, also has provided a big lift.

Brockington said he “took a chance.”

“I didn’t really have reservations,” he said. “I mean, as far as I was concerned, it was a whole new team.”

The Cyclones also bonded in the summer as they followed Otzelberger's meticulous scheduling, which included early-morning cardio workouts on a soccer field. The team's faith in its coach is most noticeable on defense, where it is allowing 62.7 points per game this season.

“Everything was fully planned out and he held us all to a high standard,” Brockington said. “The guys that were new and the guys that were there from the previous years, he let us know, like this is a whole new era, like this is not where you’ve been before. He didn’t really give us an option. It was kind of like get with it or get left. This is how we’re going to do it.”

Otzelberger said he wanted to set a tone right away and learn more about his new players, so the summer workouts were intended to feel like the team was getting ready to play. He also has scheduled time for his players to learn more about sleep habits and nutrition, and yoga also is part of the team's routine.

“We tried to spend a lot of time educating them on choices that they make when they’re away from us and how that impacts their ability to be successful as student-athletes,” Otzelberger said. “And then with the hours that we’re given, we try to really work with them to be efficient and make sure that we’re maximizing the intensity that we go in the time that we are able to work with them.”