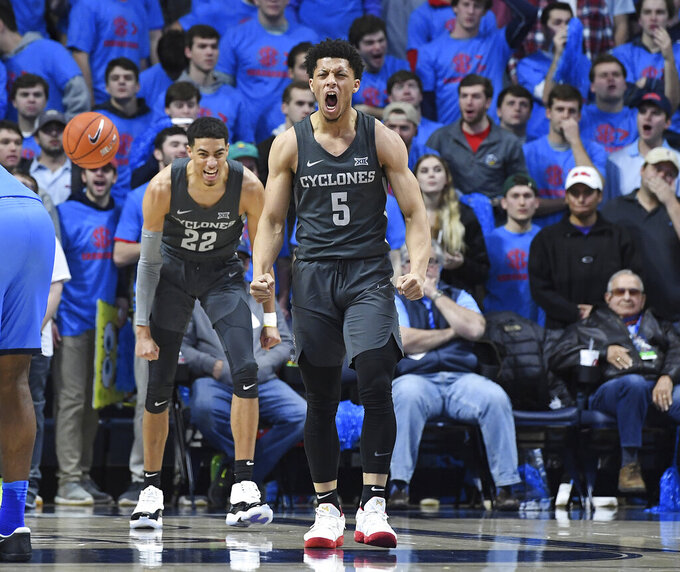 Iowa State guard Lindell Wigginton (5) reacts after being fouled during the first half of an NCAA college basketball game against Mississippi in Oxford, Miss., Saturday, Jan. 26, 2019. (AP Photo/Thomas Graning) 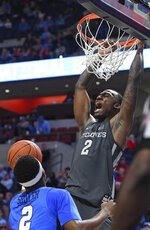 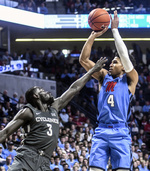 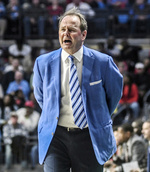 OXFORD, Miss. (AP) — Iowa State whipped the basketball around and through Mississippi's zone with precision and purpose, finding open players on nearly every possession during the second half.

By the time the Rebels figured out where the ball was, one of the Cyclones was usually slamming it through the hoop or making another open jumper.

The result was No. 24 Iowa State's impressive 87-73 victory over No. 20 Ole Miss in the SEC/Big 12 Challenge on Saturday. Freshman Talen Horton-Tucker scored 23 points and sophomore Lindell Wigginton added 18.

"In the second half, we came out locked in," Horton-Tucker said. "We made some big shots."

Iowa State (15-5) put on an offensive show, making 13 straight shots during the second half to break open a tight game. The Cyclones shot 69 percent from the field, including nearly 77 percent in the second half.

The 6-foot-4 Horton-Tucker, who leads all Big 12 freshmen in scoring, made 11 of 18 shots from the field and added eight rebounds and five assists. Marial Shayok added 17 points on 6 of 9 shooting, including 3 of 5 from 3-point range.

"I think you just see the depth of our team," Iowa State coach Steve Prohm said. "If our team can just really chase our ceiling, we can do some really good things."

Ole Miss (14-5) pulled within 43-42 on Terence Davis' tip-in early in the second half but never took the lead. The Rebels connected on just 36 percent of their shots, but their biggest downfall was a nonexistent defense.

Ole Miss was led by Breein Tyree with 22 points and Davis with 16.

"We just had a lot of defensive breakdowns," Ole Miss coach Kermit Davis said. "Our defensive field goal percentage is ridiculously high. In these kinds of games, we've got to get more players to play better. I'm responsible for it."

The Rebels missed their first eight shots and fell behind by 12 points before pulling within 43-38 by halftime.

Tyree had 13 points before the break. Horton-Tucker scored 15 in the first half on 7-of-11 shooting.

Iowa State's streak of 13 straight made shots was a clinic on offensive efficiency. The Cyclones made a few tough shots during the run, but several came at point-blank range, including six layups and a dunk.

"With us moving the ball, there's not many teams that can beat us," Horton-Tucker said.

Iowa State: The Cyclones bounced back from a close loss to Kansas earlier in the week and looked very much like a quality NCAA Tournament team. Iowa State was a little sloppy with turnovers, but it didn't matter because of the great shooting.

Ole Miss: The Rebels looked like one of the best teams in the SEC about 10 days ago, but they've regressed in losses to Alabama and now Iowa State. Ole Miss is still getting decent production out of its guards, but the lack of consistent post play is an issue. The Rebels have lost three of their last four and their 10-game winning streak earlier in the season seems distant.

"We've just got to listen to coach more, move the ball a lot better," Tyree said. "That's why we were winning so many games, a bunch of our field goals were coming off assists."