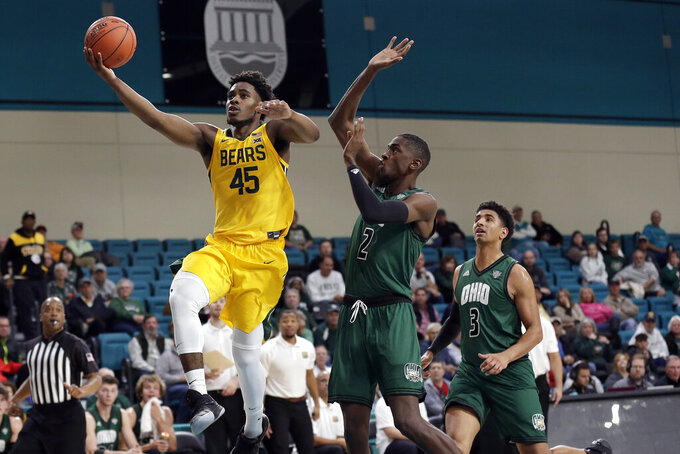 Baylor guard Davion Mitchell (45) drives to the basket against Ohio forward Nate Springs (2) and forward Ben Roderick (3) during the first half of an NCAA college basketball game at the Myrtle Beach Invitational in Conway, S.C., Thursday, Nov. 21, 2019. (AP Photo/Gerry Broome) 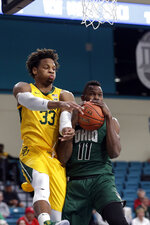 CONWAY, S.C. (AP) — Jared Butler kept on scoring for No. 24 Baylor — and gave the Bears reason to keep playing with a purpose.

Butler scored 19 points and Baylor pulled away to beat Ohio 76-53 on Thursday in the Myrtle Beach Invitational quarterfinals.

MaCio Teague added 17 points, Freddie Gillespie finished with 10 points and 11 rebounds and the Bears (3-1) used a late 15-0 run to cruise to their second straight win. Baylor established a 42-32 rebounding advantage, forced 19 turnovers and turned them into 22 points.

“If we would have lost that game, then we would have been on this trip and sad the whole time,” Butler said. “It would have (been) like we were playing for no reason.”

Lunden McDay scored 16 points and Jason Preston added 12 for the Bobcats (3-2), who have lost two in a row to the ranked teams in the eight-team field. No. 17 Villanova beat Ohio 78-54 on Saturday.

The Bobcats trailed the entire second half and cut their deficit to single digits only once, when McDay’s layup with 8½ minutes remaining pulled them within 57-48. Butler — who has led Baylor in scoring in all four games — started the Bears’ run of 15 straight points with two free throws with 8:01 to play and scored eight points during the game-breaking burst.

“Any adversity is good that the team goes with is good and we’re learning and like (coach Scott Drew) said, it’s early in the year so it’s really good for us to learn now and we’d rather learn now than later,” Teague said. “We’re still developing chemistry with guys.”

Ohio: Playing Villanova and Baylor in consecutive games is one way to force a young roster — which includes six freshmen and first-year coach Jeff Boals — to grow up in a hurry. The Bobcats can build on the seven-point lead they took during the opening 6½ minutes of this one.

“We knew coming in we had a small margin for error,” Boals said. “We had to block out, we had to take care of the basketball and make some shots and we didn’t do that, and give them credit for that.”

Baylor: The Bears were back at full strength with preseason All-Big 12 pick Tristan Clark returning after missing their victory over Texas State while having what the school described as a minor, non-operative knee procedure. Clark, who missed the final 20 games of last season after having knee surgery, had eight points and four rebounds in 15 minutes against Ohio.

Butler has come up big for the Bears so far, leading the Big 12 in scoring with an average of 21 points entering this game and scoring at least 15 points in all four. He also had five assists for the second time this season.

Baylor won despite some subpar shooting from 3-point range. The Bears made nearly 42% of their 3s during their first three games but shot just 27% from long range on Thursday. While Teague was 3 of 5 from beyond the arc, the rest of the team combined to go 1 for 10.

Baylor: Faces the Coastal Carolina-Utah winner Friday in a semifinal.