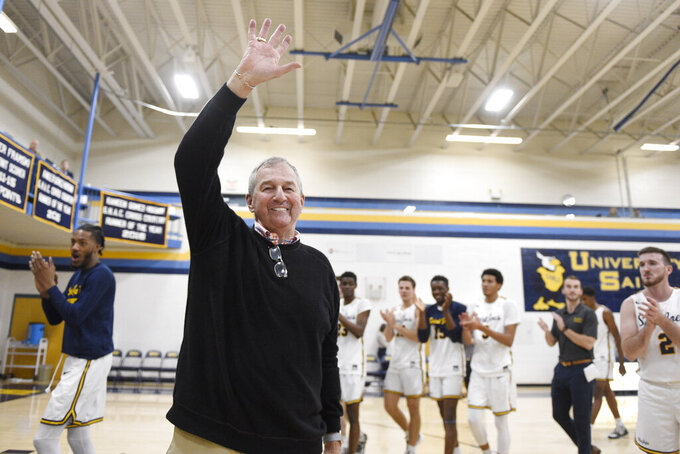 Hall of Fame basketball coach Jim Calhoun's first attempt at retirement lasted less than six years and the 79-year-old said Friday he's not expecting to spend his second one on a golf course.

Calhoun, who led UConn to three NCAA titles before hanging up his whistle the first time in 2012, stepped down Thursday as coach at Divison III Saint Joseph. He's worked there the last four years to establish a men's basketball program at the former all-women's school.

Calhoun said he has already begun discussions about serving in another role at the small university in West Hartford, Connecticut, helping it grow and helping its students.

“I mean, I’ll play some rounds of golf, but it won’t be packing things up,” he said Friday. “I still think and hope that I do have some things to offer.”

Calhoun said his top priority now will be his family. But, he said he’d also like to spend more time at UConn, where a street that runs past Gampel Pavilion is named Jim Calhoun Way.

“I do have a 30-year association with the school, so I may become more present,” he said. “But a lot of it has got to do with where can I fit comfortably and as a resource, not as a vulture overlooking to see what's not going on there. That's not ever what I want to be."

UConn Athletic Director David Benedict said Calhoun, who retired as coach there in 2012, has an open invitation.

“He is the architect of our men’s basketball program and no one is more responsible for UConn’s great successes on the court than he is,” Benedict said. "Of course, he is welcome back on campus anytime he wishes to be here.”

“There are a lot of policy issues where he can use his skills of persuasion and his determination to get policies that benefit all college kids and potential college kids across the country," she said. “I think he has a bigger stage even that he can have an impact on.”

Calhoun has overcome numerous health issues, including skin and prostate cancer. He said it has been difficult, at times, to balance his personal and coaching responsibilities during his current five-year battle with stomach cancer.

He said his most recent cancer scans came back clear and it was a big part of the reason he decided it was a good time to step aside. He said his wife, Pat, has had her own health struggles and he wants to spend a lot more time with her while they both feel good.

He said that doesn't mean he won't be looking for his next fight.