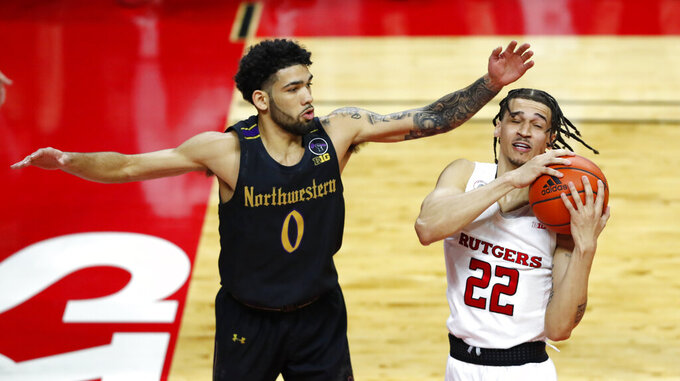 The Wildcats were held to 33% shooting in their lowest-scoring game of the season.

Harper, a preseason All-Big Ten selection, struggled after a strong start to the season.

Johnson scored all 12 of his points in the first half on 5-of-6 shooting.

“It’s not really me,” Johnson said. “It’s just my teammates. They find me when I’m open, and I put the ball in the basket. I’m happy that they found me and they’re always looking out.”

“After they jumped on us quickly, I thought we settled down,” Pikiell said.

The Wildcats got back in it with an 11-0 run early in the second half, making it 41-38 with 13:04 remaining. However, within three is the closest they would get the rest of the way.

After a lopsided loss at No. 15 Iowa, Rutgers needed the victory to have any chance of staying in the Top 25.

Rutgers guard Paul Mulcahy broke his nose in the first half of the last game vs. No. 15 Iowa. He played the rest of that game, and played today’s game with a face shield a la former Detroit Pistons great Richard Hamilton.

“Paul has been playing with a finger that got dislocated, he's got a broken nose. He’s tough as can be, and he was ready to go today.” Rutgers coach Steve Pikiell said of the Bayonne, N.J. native, adding. “He’s one of the toughest guys I’ve ever coached.”

Rutgers: Barring a catastrophic collapse in the final few weeks of the season, the Scarlet Knights have put themselves in good position to end the program’s 30-year NCAA Tournament drought.

Rutgers: At No. 3 Michigan on Thursday night.