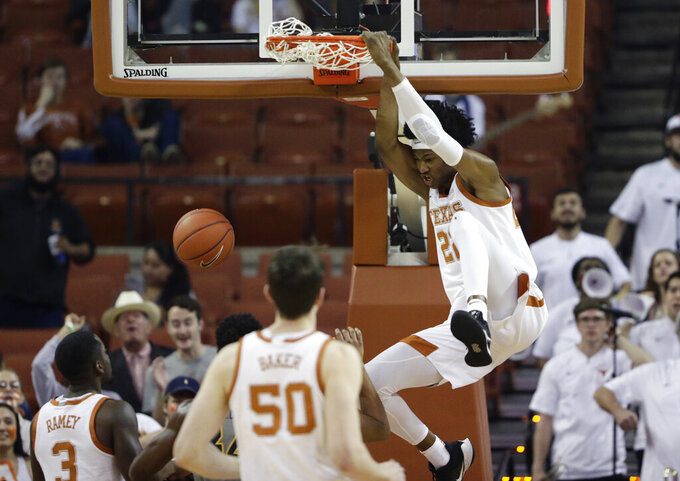 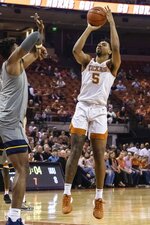 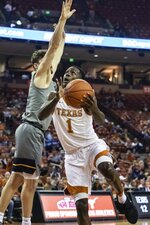 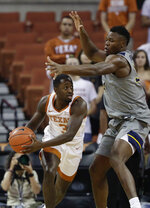 AUSTIN, Texas (AP) — Texas got pummeled by West Virginia earlier this season. The Longhorns were anything but the same timid bunch in the rematch.

Andrew Jones scored 22 points and Courtney Ramey added 21 to lead the surging Longhorns over the 20th-ranked Mountaineers 67-57 on Monday night as Texas won its third in a row with an injury-depleted lineup.

West Virginia beat Texas by 38 points back on Jan. 20, the worst loss of coach Shaka Smart's five years with the Longhorns. But the Mountaineers came staggering into the rematch off a long road trip and Texas didn't buckle in a physical matchup while Jones and Ramey poured in points from the outside.

Jones scored 16 points in the first half on a barrage of 3-pointers, and the Longhorns shot 62% against one of the best defensive teams in the country to lead 34-28 at halftime. Texas trailed by 25 at halftime in the first meeting.

Texas is missing three starters or regular players with injuries and had another, forward Kamaka Hepa, knocked out with strep throat Monday night.

“Over the last couple of games, me and Courtney have just felt a chemistry. It’s beginning to click,” Jones said. “With guys out, it's forcing me to step up. When two players are in sync, you can do great things and lead a team to victory."

West Virginia cut the Texas lead to three early in the second half before Ramey drilled a 3-pointer from the left wing, then made another to push the lead to nine.

The Mountaineers' last real chance to push for the lead came when Smart was called for a technical foul and Sean McNeil made both free throws to get West Virginia within 54-47. But Texas' Matt Coleman III made a quick jumper on the other end and any momentum quickly died.

“I did not try to get that. When you are playing (West Virginia), it’s hand-to-hand combat," Smart said. "It’s a very challenging game to officiate. I imagine I just got caught up standing up for our guys.”

West Virginia: The Mountaineers have been woeful on the road and terrible free-throw shooting doomed them Monday night. They were 10 of 21 on a night they got to the shooting bonus early in the second half. Just a few made shots would have kept the game close.

The Mountaineers are also just 7 of 44 shooting 3-pointers over the the last three games. West Virginia made three against Texas, none in the second half.

“This game is about making shots. They made shots and we can’t,” West Virginia coach Bob Huggins said. “They continue to clank off the rim and its demoralizing. It zaps your enthusiasm.”

Texas: The Longhorns are playing with the desperation they needed a month ago. They have clawed back from the bottom third of the league in a season of open speculation on Smart's future. Texas hasn't finished at .500 or better in the Big 12 since Smart's first season in 2015-2016.

“Our guys really exemplify Texas fight,” Smart said. “We haven't talked to the guys about the negative stuff people say about us. ... What you are seeing the last few games is the back against the wall and still fighting.”

Texas freshman guard Brock Cunningham barely played much of this season but has taken on a much bigger role as injuries decimated the lineup and has delivered some big and timely plays.

Cunningham had two key offensive rebounds in the final three minutes, then came flying down the baseline to block a shot by Jermaine Haley, protecting a 62-54 lead with 1:44 left.

“That's just what I bring to the team,” said Cunningham, whose defensive intensity has sparked similar efforts from teammates.

Cunningham didn't even play in 15 games this season, but has logged at least 15 minutes in each of the last four.

“We’re at a point of this season where if we had lost any of these last three games, our postseason dreams would have been shattered,” he said.