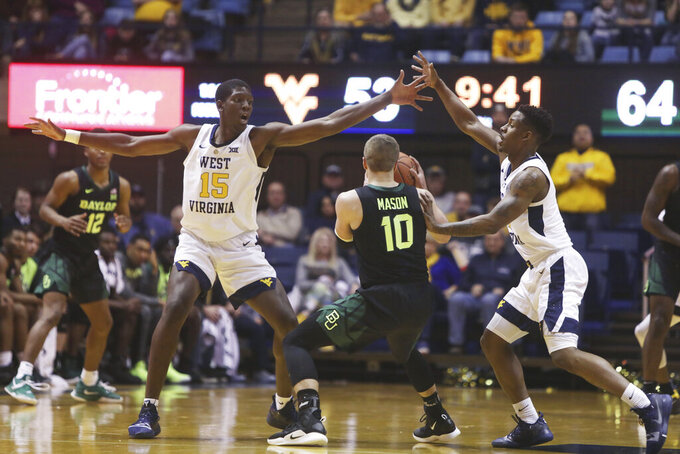 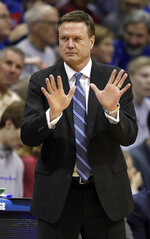 FORT WORTH, Texas (AP) — Texas Tech coach Chris Beard doesn't even really look at the Big 12 standings until every team has had a chance to play one another.

"Until you make the turn ... and you kind of come up for air," said Beard, whose 14th-ranked Red Raiders (15-4, 4-3 Big 12) had the outright lead before their current three-game losing streak.

Going into a weekend hiatus from league play for the annual SEC/Big 12 Challenge even before getting to that midway point, it is quite a jumble in Beard's conference, which still ranks as the best overall in the country by some key metrics.

It is no surprise to see No. 9 Kansas atop the standings, tied with streaking Sunflower State rival Kansas State, but the 14-time defending champion Jayhawks (16-3, 5-2) are still adjusting after the loss of big man Udoka Azubuike to a season-ending hand injury. The Wildcats (15-4, 5-2) have won five in a row since getting forward Dean Wade back from a foot injury.

"We're playing well. I think the big thing is we got some guys healthy, I think we figured out our roles," Kansas State coach Bruce Weber said Thursday. "All we can worry about is game to game. Right now, Texas A&M is very important for us, the SEC challenge is important for our league, to solidify that we're the top conference in the country."

Baylor (12-6, 4-2) has rebounded to win three in a row after a season-ending knee injury to emerging sophomore forward Tristan Clark, who was the nation's most accurate shooter before he got hurt earlier this month.

There are then five other teams within two games in the loss column in the Big 12 standings — Texas Tech, No. 24 Iowa State, TCU, Oklahoma and Texas. There are six weeks of conference games remaining after Saturday's SEC/Big 12 Challenge.

"I don't know if motivation is the right word, but you know it's going to be wide open," TCU coach Jamie Dixon said.

The Big 12 has the best strength of schedule, with Kansas the No. 1 overall team in the latest RPI, though the NCAA is replacing that with its own formula for the selection committee filling out the 68-team NCAA Tournament field.

The new NCAA Evaluation Tool (or NET) relies on game results, strength of schedule, game location, scoring margin, net offensive and defensive efficiency and quality of wins and losses. Eight of the Big 12 teams, or 80 percent, were in the top 68 in the NET rankings as of Thursday, with Kansas a Big 12-best 14th.

"It takes into consideration efficiency, and depending on who you play, if you play really good teams, sometimes your efficiency's not as good, and we've played so many close games," Kansas coach Bill Self said. "It'll balance out over time once you get through the league. But right now I don't think that we look near as good because I think we played such a hard schedule."

Kansas, at Kentucky on Saturday in a matchup of the two winningest programs, has five nonconference wins over AP Top 25 teams, including current No. 1 Tennessee. The SEC/Big 12 Challenge's only other AP Top 25 matchup is No. 24 Iowa State at No. 20 Ole Miss.

The other SEC/Big 12 matchups Saturday are Alabama at Baylor; Florida at TCU; Kansas State at Texas A&M; South Carolina at Oklahoma State; Texas at Georgia; Vanderbilt at Oklahoma; and Arkansas at Texas Tech.

"The winning streak is nice, obviously in the league it got us back into the race, but right now, we've got to worry about Texas A&M," K-State's Weber said. "You want to keep that momentum going in a positive direction. ... In our league especially, it's one thing to have a bad day, you don't want to have a bad week. And it's very easy to have a bad week in our league because the balance is there and it's tough day in and day out to get ready for every game."