Kansas forward De Sousa gets year of eligibility back 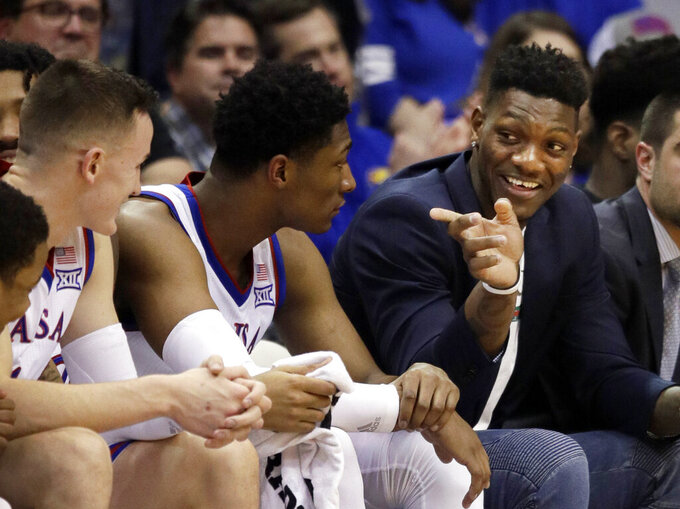 FILE - In this Feb. 2, 2019, file photo, Kansas forward Silvio De Sousa, right, points to teammates during the second half of an NCAA college basketball game against Texas Tech in Lawrence, Kan. De Sousa will be eligible to play next season after the NCAA's reinstatement committee agreed Friday with an appeal filed by the school. (AP Photo/Orlin Wagner, File)

Kansas forward Silvio De Sousa finally got some good news from the NCAA on Friday.

His education and career had been in limbo after the organization ruled in February that De Sousa was ineligible this past season and next season. But after the school appealed what it considered overly harsh sanctions , De Sousa was granted a reprieve from the NCAA's reinstatement committee.

He is clear to play next season.

"I'm so excited to be able to come back to Kansas," De Sousa said in a statement. "All those days and nights wondering what would happen — this makes it all worth it."

De Sousa's long road toward playing for the Jayhawks again came after his name surfaced last summer in an FBI probe into corruption in college basketball. The NCAA found that his guardian, Fenny Falmagne, had received a $2,500 payment from a "university booster and agent" and agreed to an additional $20,000 payment from the same individual and an Adidas employee for securing his commitment to Kansas.

Kansas decided to withhold De Sousa from competition just before the start of last season after it learned of new details in the corruption investigation. But when the NCAA's decision to suspend him for two full seasons was handed down, it was decried by those across the college basketball landscape.

In an emotional news conference, Kansas athletic director Jeff Long said he was "incensed" by the NCAA's decision. Jayhawks coach Bill Self likewise vowed that he would "fight for Silvio."

"I'm extremely happy for Silvio," said Self, who was on vacation when he got the news. "Silvio has been unbelievably upbeat and patient throughout this process, far more than I could be.

"Silvio is the type of student-athlete that college athletics needs," Self added in a statement. "He wants to be a student and contribute to representing this university on the court. This moment belongs to Silvio and I'm proud to be his coach. I know he'll be more motivated than ever."

Kansas argued in its appeal that De Sousa never knew of any alleged payments, that the school had been proactive in keeping him from competing and that the punishment the 6-foot-9 sophomore received was inconsistent with those handed down by the NCAA in similar cases.

In the meantime, De Sousa declared for the NBA draft under the assumption he would not be allowed to play next season. But he also said he preferred to play another season for the Jayhawks.

"I am thankful that Silvio has the opportunity to continue his academic work and play basketball for Kansas," Long said. "He is an exceptional young man, and I am so happy that he gets to do what he truly wants to do, which is study and play basketball at KU."

So far, he has barely played half a season for the Jayhawks.

De Sousa committed in August 2017 and enrolled for the second semester, just in time to help Kansas during its Final Four run. He played major minutes in the absence of injured big man Udoka Azubuike throughout the Big 12 and NCAA tournaments, including his best game against powerhouse Duke.

But the native of Angola is still a relatively raw prospect, even though he was able to practice with the Jayhawks last season, and another year of college should help his draft stock significantly.

"I tried to turn the year off into a blessing," De Sousa said. "I got to work on my game and my academics, and now I'm going to make the most of this opportunity."

De Sousa should be able to team with Azubuike to form one of the more intimidating frontcourts in the country. The 7-foot Azubuike briefly considered declaring for the draft, but he missed much of last year after wrist surgery and would have been unable to compete in pre-draft camps.

The school is still waiting to hear whether guards Devon Dotson and Quentin Grimes remain in the draft or return to Kansas next season. Both have until Wednesday to make a decision.

Kansas also is trying to close out its recruiting class by landing a pair of five-star prospects this summer. Small forward Jalen Wilson is considering the Jayhawks after a coaching change led him to seek his release from Michigan, and point guard R.J. Hampton recently reclassified to this year's class.

Both of them are also expected to make decisions in the coming weeks.