Kansas gives Bill Self contract to keep him until retirement 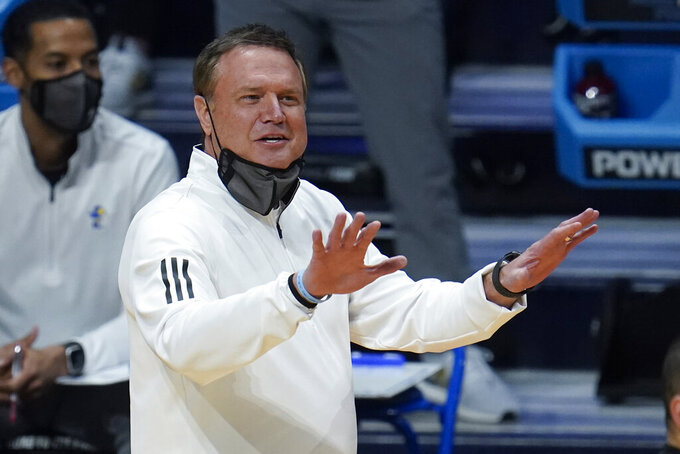 Kansas head coach Bill Self signals against USC during the first half of a men's college basketball game in the second round of the NCAA tournament at Hinkle Fieldhouse in Indianapolis, Monday, March 22, 2021. (AP Photo/Paul Sancya)

Kansas basketball coach Bill Self has agreed to a new contract that will keep him with the Jayhawks until he retires, even as the school awaits a decision from an independent panel investigating five Level I infractions charges alleged by the NCAA.

The school announced Friday that Self agreed to a five-year contract that adds one additional year after the conclusion of each season — in effect, making it a lifetime contract. The deal guarantees him $5.41 million per year with a base salary of $225,000, professional services contract of $2.75 million and an annual $2.435 million retention bonus.

Self was closing in on the end of a 10-year contract signed in September 2012 that guaranteed him $52.2 million along with a $7.2 million retention bonus. That bonus will be paid in $100,000 monthly installments over seven years.

“There is no place I would rather be,” Self said in a statement. “As we continue to work through the challenges facing our program, we look forward to moving ahead and focusing on our bright future.”

Some wondered whether the 58-year-old Self would depart before the Jayhawks are potentially dealt severe sanctions tied to the FBI's investigation corruption into college basketball. The NCAA announced the five charges along with less serious transgressions involving the football program in September 2019. The school disputed the charges, setting off a back-and-forth chain of events that still have not been resolved.

The case is now in the hands of the NCAA's new Independent Accountability Resolution Process. The IARP is made up of arbitrators who have broad investigative powers and whose judgement is considered final.

Self's new contract includes a clause that says the school cannot terminate him for cause “due to any current infractions matter that involves conduct that occurred on or prior to” the signing of the new contract. Instead, he would forfeit half of his base salary and professional services pay while he served any suspension handed down by the Big 12 or NCAA.

It's unclear when the IARP will announce a decision, though most expect it sometime this fall.

“For almost 20 years, Coach Self has embodied the spirit and tradition of the University of Kansas,” Chancellor Doug Girod said. "We believe in Coach Self and we believe in the future of our program under his leadership, and we are thrilled that he will continue to be a Jayhawk for the rest of his coaching career.”

The timing of Self's new contract is also unique in that Kansas doesn't currently have a full-time athletic director. Jeff Long resigned las month amid pressure from fans and donors following his botched hiring of football coach Les Miles, who likewise was forced to resign when allegations of sexual harassment surfaced from his days at LSU.

With the help of an advisory panel and an outside firm, Girod is currently conducting a search for a new AD while the football team begins spring practice under interim coach Emmett Jones. The new AD will lead the search for a new coach.

With so much uncertainty, perhaps it made sense that Kansas wanted to keep Self around for the foreseeable future.

“I have known Bill for many years, but working closely with him over the past few weeks in my current role has shown me even more so on a daily basis how deeply he cares about this program,” said Kurt Watson, a longtime athletic department official and the current interim athletic director.

Self, who played at Oklahoma State, started as a graduate assistant to Larry Brown with the Jayhawks before returning to his alma mater and working under Leonard Hamilton and Eddie Sutton. Self got his first head job with Oral Roberts, then headed to Tulsa, where two NCAA Tournament trips and an Elite Eight appearance earned him the job at Illinois.

Self also led the Illini to the Elite Eight during three seasons in Champaign before the job opened at Kansas.

Since his arrival in Lawrence, the Jayhawks have won at least 21 games every season — including this past one, which was shortened due to the COVID-19 pandemic and ended with a loss to USC in the second round of the NCAA Tournament.

The Jayhawks have won or shared 15 conference titles during his 18 seasons and never failed to make the NCAA tourney when it was played. Eight of those trips made it to the Elite Eight or beyond, including three appearances in the Final Four and two in the national title game. Kansas beat Memphis in overtime to win the 2008 championship.

“Every day I am reminded just how fortunate I am to lead this storied program and there truly is no place else I would rather be,” Self said.