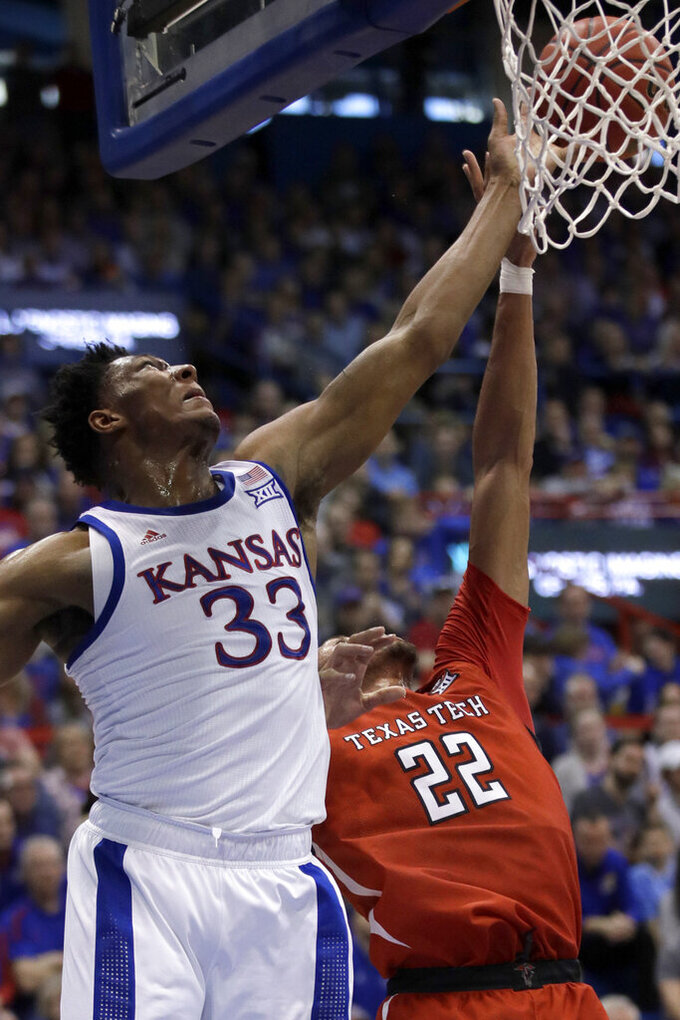 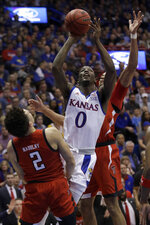 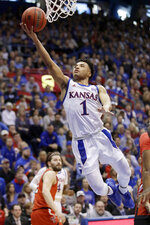 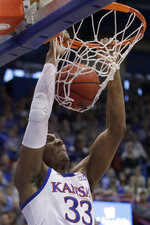 LAWRENCE, Kan. (AP) — David McCormack returned from a suspension and made his presence felt when Udoka Azubuike got in foul trouble.

In his first game back after a two-game suspension, David McCormack contributed three blocks, six rebounds and six points.

“He gave us great minutes. When he was in he made some key plays that got the crowd into it,” Dotson said. “He did some really great things out there tonight. I feel like he’s a big reason we won this game today.”

With Azubuike sidelined due to foul trouble, Kansas coach Bill Self turned to McCormack to pick up the slack after having served his two-game suspension. Contributing 20 minutes off the bench, a few key blocks and momentum-swaying dunks by the big man played a key role in the Jayhawks’ slim victory.

“He’s a great player," Tech’s TJ Holyfield said. "He’s very different than Azubuike because he has a face-up game.”

The Jayhawks led 76-75 with 14 seconds to play before Ochai Agbaji knocked down two free throws and the Red Raiders were unable to come away with a basket to complete the upset.

Kansas (18-3, 7-1 Big 12) opened up the game scoring the first 10 points. Though Azubuike saw only seven first-half minutes due to two early fouls, Kansas took a 44-35 edge into halftime as Dotson posted 13 first-half points.

“We didn’t really have our team in there. We’re used to playing with Dok and he wasn’t really a factor at all,” Self said.

Texas Tech was able to cut an early 15-point deficit to a single possession as Jahmi’us Ramsey lead the way with 26 points. Weathering the Jayhawks’ hot start, Texas Tech shot 42.6% from the field to remain within reach down the stretch.

Holding a mere 57-55 lead midway through the second half, the Jayhawks strung together a 9-0 run. Despite two late threes by Tech’s TJ Holyfield to pull within four points, the Red Raiders could not overcome the streaky Kansas offense in their 78-75 loss. Holyfield finished with 19 points.

“This guy was dynamite and I hope that’ll be part of the story tomorrow,” Texas Tech coach Chris Beard said of Holyfield.

The Jayhawks have not trailed at all in two consecutive games after overpowering Oklahoma State 65-50 on Monday and maintaining the advantage all day against the Red Raiders despite minimal contributions from Azubuike (5 points).

After an overtime loss against then No.15-ranked Kentucky followed by an eight-point victory over then No. 12-ranked West Virginia, the Red Raiders again held close with a top-ranked opponent for the third-consecutive week.

No. 1 Baylor handedly defeating Iowa State and TCU, and No. 2 Gonzaga outlasting BYU and San Francisco, Kansas should hold steady at No. 3 with wins over Oklahoma State and Texas Tech.

Playing without the efforts of Chris Clarke, who attempted to play but lacked movement due to an ankle injury, and Kevin McCuller, who’s facing concussion protocol, Beard was impressed by the close-game effort of his program.

“To be missing two of our top seven or eight players and then come in here and get into a one possession game, I think that speaks pretty clearly on how valiant we were,” Beard said.

Texas Tech: The Red Raiders return to Lubbock, Texas, to take on Oklahoma on Feb. 4.