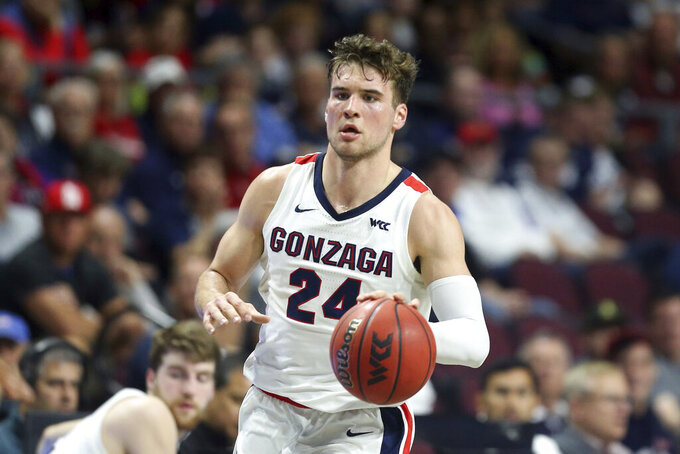 SPOKANE, Wash. (AP) — Corey Kispert believed Gonzaga would be playing for the national title at the end of last season, before the Bulldogs' championship aspirations were derailed by the coronavirus pandemic.

In the wake of the disruption, Kispert thought about saying goodbye to those dreams of a college championship and moving on to play professionally. But the draw of what Gonzaga missed out on, and the hopes of finally bringing a national title home, pulled Kispert back in.

“It leaves a pit in the stomach that hasn’t been filled,″ Kispert said.

The senior forward is a big reason the Bulldogs are beginning the season as the No. 1 team in the preseason Associated Press Top 25. He's a preseason All-American selection as well, looking to improve on a team that last season went 31-2 overall and 15-1 in the West Coast Conference before the season came to an abrupt end before the NCAA Tournament.

Despite losing several top players, the Zags should be in the mix as contenders again. Kispert, who was named to the WCC first team last season, averaged 13.9 points per game, led the team in minutes played and made 3-pointers (78) and hit 81% of his free-throws. He shot 43.8% from behind the arc.

“I wanted to be on this team,'' Kispert said. ”It will be in our hands. I see the talent from the freshmen to the other guys, and it's easy to want to be a part of it.''

Gonzaga has talent in abundance.

Joel Ayayi, who pulled his name from the NBA draft, and sophomore Drew Timme were big contributors last season. Ayayi averaged 10.6 points and 6.3 rebounds, while Timme added 9.8 points off the bench.

The Zags have three highly touted freshmen in Jalen Suggs, Dominick Harris and Julian Strawther. Suggs is the probable starter at point guard, while Harris and Strawther should see playing time.

Suggs' development will be important with the Zags losing guards Ryan Woolridge and Admon Gilder.

“Jalen has tremendous potential,'' Ayayi said. "Dom is going to be one of the best defenders when he gets dialed in and he’s a better shooter than people give him credit for. (Strawther) is versatile, super talented. I don’t think there’s one thing he can’t do on the floor.”

The front court will include 7-footers Pavel Zakharov, who saw limited time as a freshman, and Oumar Ballo, who is coming off an NCAA-mandated academic redshirt year. They’re competing for playing time behind Timme, who was highly productive backing up departed WCC player of the year Filip Petrusev.

Anton Watson looked good in the first 15 games of his freshman year before he was sidelined by a shoulder injury. The 6-foot-8 forward is back and healthy.

“Those guys are stepping into big leadership roles,'' Kispert said of Timme and Watson. ”They are the guys we'll be leaning on in the front court.''

Coach Mark Few is one victory shy of 600 for his stellar career. That could come in two weeks when the Bulldogs open against No. 6 Kansas in a Thanksgiving Day game in Fort Myers, Florida.

"We have to get up to speed in a hurry,” Few said.

Starters Petrusev, Killian Tillie and Woolridge graduated or left early. Along with Gilder, who was a part-time starter, the Bulldogs lost more than 50 points per game combined. It helped that Gonzaga was incredibly balanced with its scoring last season as six players averaged double figures.

Suggs, Harris and Strawther came in as a unit and call themselves the “Tricky Trio.” Suggs is considered a one-and-done player who has already been nominated for the Bob Cousy Award.

The Zags added guard Aaron Cook, a graduate transfer from Southern Illinois with 103 career games. Cook averaged 10.5 points during 2018-19 and last season averaged 15.0 points in six games before his season ended early due to injury.

For the 19th time in the past 20 seasons, Gonzaga was selected as the favorite in the WCC preseason coaches’ poll. BYU was picked second. Saint Mary’s was third. Gonzaga has posted 13 straight seasons of 25 wins or more and six 30-win campaigns in the last eight years. Gonzaga owns the longest active streak of appearances in the Sweet 16 with five.

The Zags play early games against No. 6 Kansas, Auburn, No. 2 Baylor, No. 5 Iowa and No. 12 Tennessee. While the Zags are known for playing a brutal nonconference schedule to make up for playing in the WCC, they don't typically start with such a challenging stretch. There are very few tune-up games against lesser opponents early in the schedule. "We have to be ready to go from the first minute of the first game,'' Kispert said.