Koumadje has double-double as No. 17 Florida St. routs Wake 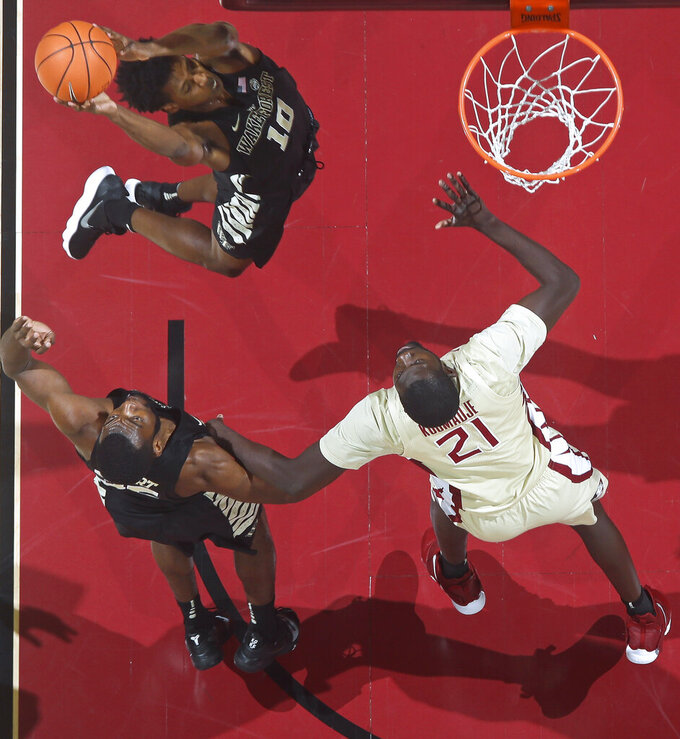 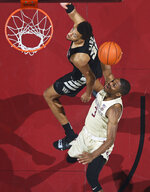 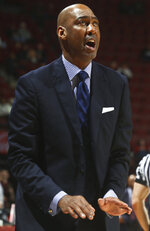 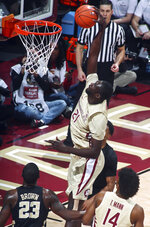 TALLAHASSEE, Fla. (AP) — Christ Koumadje hasn't had many chances to make an impact on games this season. But he used his long, 7-foot-4 frame to dominate Wake Forest for the best night of his college career.

Koumadje recorded his first career double-double, with a season-high 20 points and a career-high 12 rebounds, to help No. 17 Florida State rout Wake Forest 88-66 on Wednesday night.

"He did a really good job of going to the offensive glass early on, especially in our zone," Wake Forest coach Danny Manning said. "We didn't turn and go hit him, he brought the contact to us. When he gets within four feet of the basket, when he jumps, he's right there at the rim."

Koumadje, who is playing in his 109th career game, played just 24 minutes but was efficient from start to finish. He made 10 of 12 shots from the floor as the Seminoles won their sixth straight game.

While he has been an effective rebounder this season, Koumadje didn't score in Florida State's last game and hadn't produced more than nine points in his previous 10 ACC games this season. But he was a significant part of the game plan from the start on Wednesday, scoring 12 points and pulling down eight rebounds as the Seminoles took a 38-31 halftime lead.

"The coaches demand energy from me," Koumadje said. "Coming out, I was just trying to be aggressive. My teammates found me. I was crashing the glass."

Phil Cofer scored 13 points and Mfiondu Kabengele had nine points and seven rebounds for Florida State (19-5, 7-4 ACC), which enjoyed its most lopsided win against an ACC team this season. The Seminoles' previous best performance was an 80-62 win at Syracuse on Feb. 5.

"We didn't rebound the ball the way we had typically rebounded in league play," Manning said. "We have to do a better job on the backboard."

Chaundee Brown scored 20 points on 7 of 12 shooting and Brandon Childress had 11 points for Wake Forest (9-14, 2-9). The Demon Deacons are just 1-6 against ranked teams this season.

The Seminoles shot 56.5 percent (35 of 62) from the floor. They had 13 players score in the game as Florida State's bench produced 41 points.

"We intended to get them in regardless," Florida State coach Leonard Hamilton said of using the reserves. "They were very effective when they went in."

Florida State has won six straight ACC games for the first time since the 2011-12 season in which the Seminoles also won the league tournament.

Koumadje is the eighth Florida State player to lead the team in scoring in a game this season. Others who have led the way for the Seminoles are Cofer, Kabengele, P.J. Savoy, Terance Mann, M.J. Walker, Trent Forrest and David Nichols.

Wake Forest came in shooting 29.8 percent from 3-point range. But Childress and Brown each made 3-pointers on Wednesday as the Demon Deacons shot 44 percent (11 of 25) from beyond the arc.

"They hit some 3s that we contested very well," Hamilton said.

Few ACC teams have been as impressive as Florida State the past three weeks. The Seminoles could move up into the top 15.

Wake Forest: The Demon Deacons battled for a half but lost for a sixth straight time in Tallahassee, where they haven't won since 2008.

Florida State: The Seminoles shot 64.5 percent (20 of 31) in the second half and only committed four turnovers in the final 20 minutes.