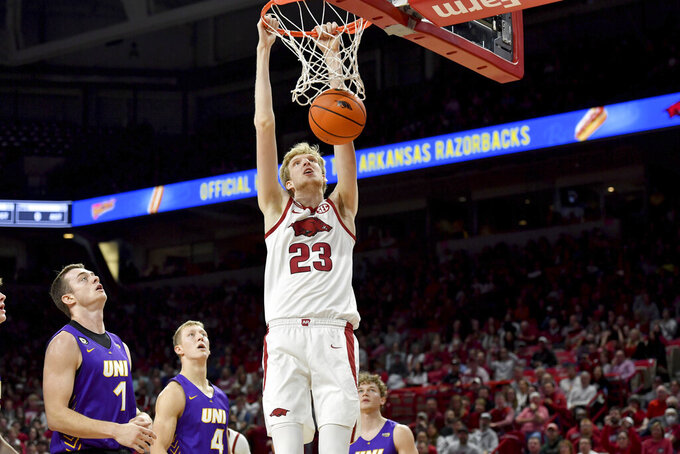 The teams traded the lead 18 times and were tied another 10. Northern Iowa (1-3) stayed competitive by making 17 of 37 from 3-point range and led 78-77 before the Razorbacks surged.

Arkansas entered the game 328th out of 350 Division I teams defending the 3-pointer.

“They hadn't shot the ball very well before they met our defense," Arkansas coach Eric Musselman said. “I can promise you guys that defending the 3 was part of the game plan coming in. We seem to have solved most of the issues that have come up through a small three-game sample size. We have not solved defending the 3-point line.”

Jaylin Williams' layup with 2:42 left put Arkansas (3-0) ahead for good. The Razorbacks forced three straight turnovers during the final run and finished off the game from the foul line.

Trae Berhow led the Panthers with 23 points and shot 7 of 11 from deep.

The Razorbacks had 21 assists on 35 baskets and committed just five turnovers.

“You’re not going to find many teams at any level that score 93 points and only have five turnovers,” Musselman said. “Taking care of the basketball, we did an incredible job and 53 points in the second half was, offensively, I thought we were really good.”

Arkansas has needed a run to beat all three of its mid-major opponents so far, though those bursts have provided for double-digit wins each time.

Northern Iowa, picked third in the Missouri Valley, is warming up after losses to Nicholls State and Vermont.

Arkansas will play its first power-conference opponent of the season, Kansas State, as part of the Hall of Fame Classic in Kansas City on Monday.