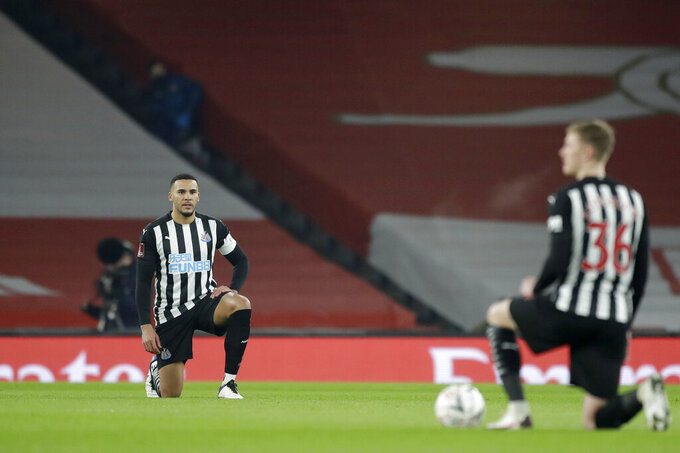 Newcastle's Jamaal Lascelles and Sean Longstaff, right, take the knee before the start of the English FA Cup third round soccer match between Arsenal and Newcastle United at the Emirates Stadium in London, England, Saturday, Jan. 9, 2020. (AP Photo/Matt Dunham)

Southeastern Conference men’s basketball games on Tuesday featuring Tennessee at South Carolina and Vanderbilt at No. 13 Missouri have been postponed due to a combination of positive COVID-19 tests, contact tracing and subsequent quarantining of individuals within the Missouri and South Carolina basketball programs.

It's the seventh time in just over a month that the South Carolina men won’t be able to play a scheduled game due to issues with COVID-19. Missouri paused all men’s basketball activities on Friday as a result of COVID-19 protocols.

Make-up dates for the two games have not been determined.

With the cancellation of the two games, Tennessee will now play at Vanderbilt on Tuesday night, and the teams will meet again next Saturday in Knoxville.

The Toronto Raptors and Tampa Bay Lightning won’t have fans at home games in Tampa, Florida, until at least Feb. 5.

Vinik Sports Group, which owns the Lightning and Amalie Arena, announced Saturday the organization wouldn’t admit fans because coronavirus cases in the area have “risen sharply.”

Florida reported nearly 20,000 new cases on Friday as the pandemic surges there. The state has recorded more than 1.4 million cases since the pandemic began.

“We are not comfortable bringing large numbers of fans indoors to watch hockey or basketball right now,” said Steve Griggs, CEO for Vinik Sports Group and the Lightning. “We are hopeful to reopen the arena soon after we see declining rates and better overall numbers.”

The defending Stanley Cup champion Lightning open the season at home Wednesday against the Chicago Blackhawks.

The Raptors were one of about a half dozen NBA teams to permit a limited number of fans at home games, with 3,800 tickets available for each game.

Because of Canada’s border restrictions and rising COVID-19 cases, the Raptors were forced to play their home games out of Tampa for at least the first half of the season.

Newcastle captain Jamaal Lascelles started in the FA Cup match against Arsenal on Saturday, after about six weeks on the sidelines with a bad case of COVID-19.

The return of the skipper was welcome news for manager Steve Bruce, who had to deal with an outbreak in his squad last month.

Lascelles, a center back, reportedly had long-term effects after contracting the virus. Lascelles had only recently returned to full training ahead of the third-round clash against Arsenal. He was substituted at halftime.

On Friday, Bruce said it was “morally wrong” for football to continue amid the latest outbreak, which has affected a number of teams.

A third United Arab Emirates cricket player has tested positive and forced the scheduled one-day international against Ireland in Abu Dhabi on Sunday to be postponed to next Saturday.

Cricket Ireland said all of its players have tested negative.

The UAE won the first of the four matches, all in Abu Dhabi, on Friday. The next ODIs are scheduled for Tuesday, Thursday and Saturday.

The Browns finally caught a break when safety Ronnie Harrison, tight end Harrison Bryant and linebacker Malcolm Smith were activated from the COVID-19 list and can play in Sunday night’s wild-card game at Pittsburgh.

The hard-hitting Harrison’s return helps a depleted Cleveland secondary missing cornerbacks Denzel Ward and Kevin Johnson, who remain on the COVID-19 list and will not play.

Ward is the Browns’ best defensive back and his absence hurts as he would have been assigned to cover Juju Smith-Schuster or Chase Claypool, Pittsburgh’s top deep threats.

The sixth-seeded Browns (11-5) will make their first playoff appearance since the 2002 season short-handed.

Duke says Hall of Fame coach Mike Krzyzewski will return to the sideline Saturday for the 21st-ranked Blue Devils’ game against Wake Forest.

The 73-year-old coach said earlier this week e and his wife were placed into quarantine after a family member tested positive for COVID-19. He said they had both tested negative to that point.

Associate head coach Jon Scheyer led the Blue Devils on the sideline during the BC win.