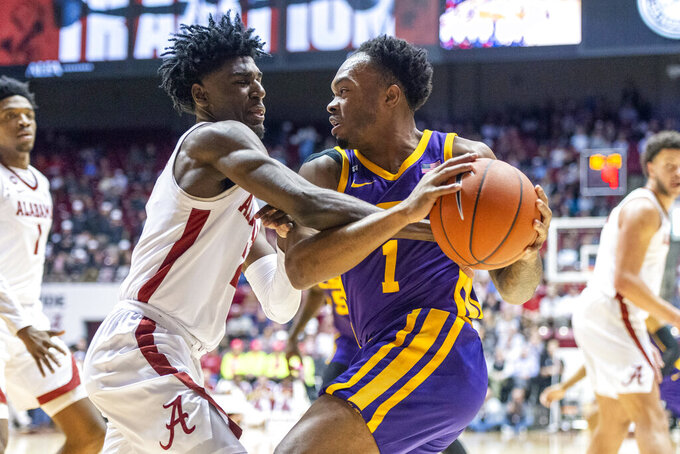 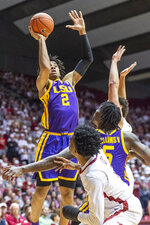 TUSCALOOSA, Ala. (AP) — LSU couldn't find a way to stop Kira Lewis Jr. and Jaden Shackelford, or to beat Herbert Jones and his one healthy hand to rebounds.

Lewis scored 27 points, Shackelford had 26 and Jones had a career-high 17 rebounds as Alabama held off a big comeback attempt by No. 25 LSU for an 88-82 victory on Saturday.

Shackelford said it was “most definitely" a must-win game for the Crimson Tide, whose postseason hopes had faded.

“We knew coming into this game, we had to come in and get this win,” he said.

The Tide (13-12, 6-6 Southeastern Conference) knocked the Tigers (18-7, 9-3) from a share of the league top spot after blowing virtually all of an 18-point lead. Alabama also took No. 11 Auburn into overtime Wednesday night before losing.

LSU came into the day in a three-way tie for atop the SEC with Auburn and No. 12 Kentucky but has lost three of its last four games since an 8-0 league start.

“We obviously did a terrible job on Lewis, and Shackelford’s just playing tremendously well."

Down 18 early in the second half, LSU made a big late surge. Trendon Watford scored on a drive and then Marlon Taylor stole Alabama's inbound pass and dished to Javonte Smart for a 3-pointer.

Jones, who had five offensive rebounds after halftime, made two free throws to a huge ovation from the fans while playing with a cast on his left, shooting hand.

“That was the best crowd I’ve heard since I’ve been here," first-year Alabama coach Nate Oats said. “It kind of hit a fever pitch there when Herb stepped to the free throw line after they intentionally fouled him knowing that he didn't have his strong hand."

Jones started working on shooting right-handed foul shots his first time back in the gym from surgery that sidelined him for three games.

“It came in handy when I got injured and I just kept working and believed in myself," Jones said.

Finally, Alex Reese buried an open 3 from the top of the key with 39 seconds left and Shackelford added a layup off a turnover for a safe cushion.

Lewis made 4 of 6 3-pointers and scored 18 in the second half to remain hot. He followed a 37-point game against Georgia with a triple-double in Auburn, the first of his career.

Likewise, Shackelford made five 3s after hitting seven and scoring 28 points against Auburn.

LSU's Skylar Mays had 24 points and nine rebounds in his third straight game scoring 20-plus. Watford, who's from nearby Birmingham, had 18 points before fouling out despite a cascade of boos from Tide fans every time he touched the ball. Smart scored 16, and he and Mays each hit four 3s.

Emmitt Williams had 13 points and 10 rebounds.

Even that cozy lead evaporated.

LSU has given up at least 82 points in three of its last four games, losing all three. This one came against the nation's No. 2 scoring offense.

“Pretty much any good guard can get loose against us," Wade said.

Alabama made 13 of 35 3-pointers after sinking an SEC-record 22 against Auburn. The Tide had lost four of its last five games, starting with a 90-76 defeat at LSU, but committed just nine turnovers.

HUDSON HONORED Former basketball star Wendell Hudson, Alabama's first African-American scholarship athlete, was honored at halftime. The jersey will be the school's first to be officially retired, though the No. 20 will remain in circulation. The winter and spring sports teams will wear a WH patch for the rest of the season.

LSU: hosts No. 12 Kentucky on Tuesday night in a pivotal league battle