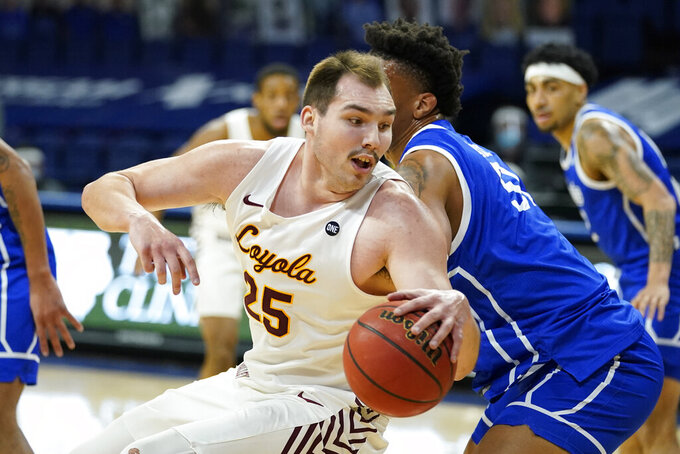 FILE - Loyola of Chicago center Cameron Krutwig drives to the basket during the first half of an NCAA college basketball game against Drake in Des Moines, Iowa, in this Sunday, Feb. 14, 2021, file photo. Krutwig, who helped Loyola Chicago reach a Final Four as a freshman and return to the Sweet 16 as a senior this year, has decided to turn pro and forgo his final year of eligibility. Krutwig announced his decision Thursday, April 22, 2021, in a YouTube video, saying it was time to move on. (AP Photo/Charlie Neibergall, File)

CHICAGO (AP) — Cameron Krutwig, who helped Loyola Chicago reach a Final Four as a freshman and return to the Sweet 16 as a senior this year, has decided to turn pro and skip his final year of eligibility.

Krutwig announced his decision Thursday in a YouTube video, saying it was time to move on. He had one more year of eligibility under relaxed NCAA rules prompted by the pandemic.

“After a great four years here, a great career here, I feel that it’s in my best interest and the right move is to go professional and move on and try to pursue my dreams to play professional basketball whether that be in the NBA or overseas in Europe,” he said. “I think the time is right for me to go out and venture out and kind of start my life.”

Krutwig is the second major departure for Loyola since a loss to Oregon State in the Midwest Region semifinals. Coach Porter Moser left for Oklahoma and assistant Drew Valentine was promoted to replace him.

Known for his versatility and passing ability in the post, the 6-foot-9 Krutwig was the Missouri Valley Conference Player of the Year last season. He averaged a team-leading 15 points along with seven rounds and three assists.

The Ramblers returned to the NCAA Tournament for the first time since their surprising Final Four run in 2018 and finished with a 26-5 record. They were ranked 17th in the final AP poll.

Krutwig played a huge role in Loyola's upset of top-seeded Illinois in the second round last month with 19 points, 12 rebounds, five assists and four steals. He and fellow Chicago-area senior Lucas Williamson led the Ramblers to 99 victories the last four years, the most wins over a four-year period in school history. Williamson has not announced if he will return.