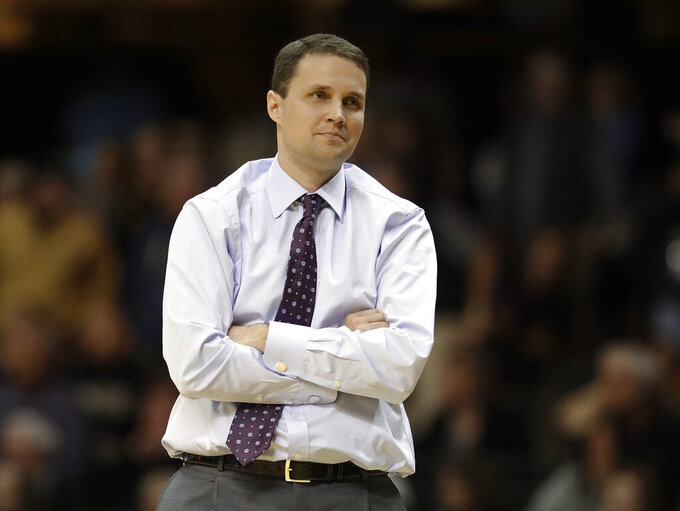 FILE - In this Jan. 20, 2018, file photo, LSU coach Will Wade watches from the sideline during the second half of the team's NCAA college basketball game against Vanderbilt in Nashville, Tenn. Wade acknowledged Tuesday, May 28, 2019, making “some mistakes” when he refused to speak with school officials in March 2019 regarding a leaked FBI wiretap transcript that raised questions about whether he committed recruiting violations. (AP Photo/Mark Humphrey, File)

DESTIN, Fla. (AP) — LSU men's basketball coach Will Wade acknowledged making "some mistakes" when he refused to speak with school officials in March regarding a leaked FBI wiretap transcript that raised questions about whether he committed recruiting violations.

Wade spoke publicly Tuesday for the first time since March 7, the day before he was suspended indefinitely by the university. He answered questions wearing a purple LSU wind-breaker during the opening day of the Southeastern Conference Spring Meeting.

"I made a poor decision on how I handled that," Wade said. "If I could go back and do it again, I would have taken the meeting."

Wade declined to provide specifics about the wiretapped conversation between him and convicted college basketball middleman Christian Dawkins and skirted questions about whether an exchange of money occurred between his current staff and a player or player's representative.

The 36-year-old Wade was suspended in the wake of a Yahoo report about leaked excerpts of an FBI wiretap that captured Wade speaking with Dawkins, who was convicted of funneling illegal payments to the families of college basketball recruits.

In transcripts of the phone call, Wade discussed presenting a "strong" offer to an apparent third-party who represented then-recruit Javonte Smart. It was not clear from the transcripts whether Wade violated NCAA rules or if Smart, a freshman who started 18 games last season, knew about the offer.

LSU reinstated Wade last month, two days after the coach met with school and NCAA officials. He did so after changing lawyers. Former LSU athletic director Joe Alleva said he had little choice but to reinstate Wade because there was no evidence showing the coach violated NCAA rules.

Wade's suspension covered the entirety of LSU's postseason, which ended with a loss to Michigan State in the third round of the NCAA Tournament.

"Any time you get lawyers involved, things get drawn out," Wade said. "So certainly wish looking back on things we could have gotten into a room together a lot quicker than we did. Certainly I respect LSU's decision based on that. I think that was a mistake I made and something I did in haste."

Wade was allegedly involved in another wiretapped conversation with Dawkins in which they discussed another highly ranked recruit, Balsa Koprivica, who ended up playing at Florida State.

As part of his reinstatement, Wade forfeited performance bonuses from his team winning the SEC regular-season championship worth about $250,000. He also agreed to contract changes making it easier for LSU to fire him for cause if he commits a Level I or Level II NCAA violation, or if the NCAA infractions committee gives LSU formal notice that Wade was involved in a Level I or Level II infraction.

"When we came out of that meeting, I knew to be the coach at LSU there were certain things that were going to need to happen," Wade said. "So I was fine with that. I was happy to give that up to be the head coach at LSU."