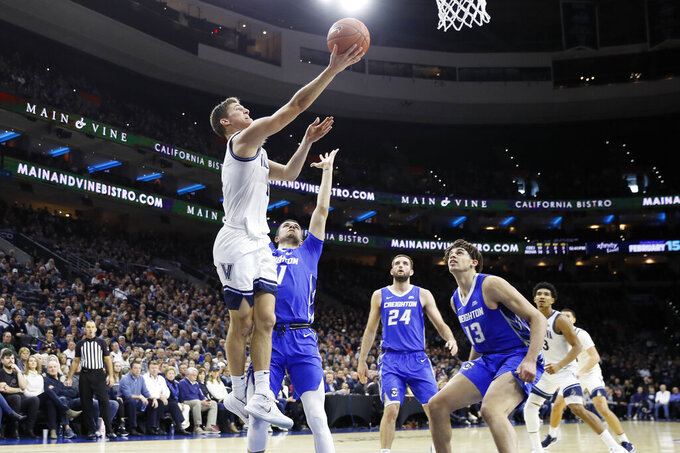 Villanova's Collin Gillespie, left, goes up for a shot over Creighton's Marcus Zegarowski during the first half of an NCAA college basketball game, Saturday, Feb. 1, 2020, in Philadelphia. (AP Photo/Matt Slocum)

PHILADELPHIA (AP) — Denzel Mahoney had 21 points and Mitch Ballock had nine of his 15 points in the second half to help Creighton defeat No. 8 Villanova 76-61 on Saturday.

Villanova trailed by as many as 17 points in the opening half and slowly cut into Creighton’s 12-point halftime lead. The Wildcats got within three, 46-43, on Moore’s 3-pointer with 12:06 to play and again on Gillespie’s layup with 10:22 left that made it 51-48.

But the Wildcats wouldn’t get any closer.

Creighton kept the Wildcats at arm’s length and had a 58-50 advantage with 7:36 remaining on Kelvin Jones’ short turnaround jumper. Then, Ballock, a 45.1 percent 3-point shooter entering, drained a long 3 before assisting Mahoney on a 2-on-1 break to make it 63-50 with 6:05 left.

But Ballock nailed a huge 3 from the left corner on a play out of a timeout, putting Creighton up 66-57 with 3:25 remaining. And Damien Jefferson then scored six straight points, capped with a one-handed dunk that made it 72-59 and put an exclamation point on the win.

Jermaine Samuels returned to the starting lineup for Villanova after sitting out Tuesday’s 79-59 win at St. John’s with a left foot sprain. Samuels, averaging 11.1 points per contest, had eight points.

Villanova leading scorer Saddiq Bey, who entered averaging 15.3 points, had just nine points while shooting 4-for-13 from the field and 1-for-5 3-point range.

Creighton led by as many as 17 points in the first half before settling for a 35-23 halftime advantage. Alexander and Zegarowski did the bulk of the scoring for the Bluejays, combining for 22 points. The Wildcats struggled mightily on offense, missing 18 of 28 shots from the field and 11 of 14 from 3-point range.

After taking an early 5-1 lead, Villanova missed nine of its next 10 shots and trailed 18-8 after Mitch Ballock’s 3 with 9:07 left. The Bluejays’ advantage ballooned to 31-14 on Zegarowski’s short jumper with 3:12 left in the half. Justin Moore netted six of Villanova’s points during a 9-4 run to close the half. It was just the fourth time the Wildcats have trailed at the intermission.

Creighton: The Bluejays will begin the second half of conference play at Providence on Wednesday and likely will be ranked in the AP Top 25. Creighton received the most votes (59) of any team not inside the Top 25 last week.

Villanova: The Wildcats had won 12 straight and 37 of their last 40 at the Wells Fargo Center, the 76ers’ home court and Villanova’s home away from home. They have two more games remaining here, Feb. 8 in a highly anticipated matchup against Seton Hall and Feb. 29 versus Providence.

Creighton: At Providence on Wednesday.

Villanova: At Butler on Wednesday.