Manning looks for answers during another tough year for Wake 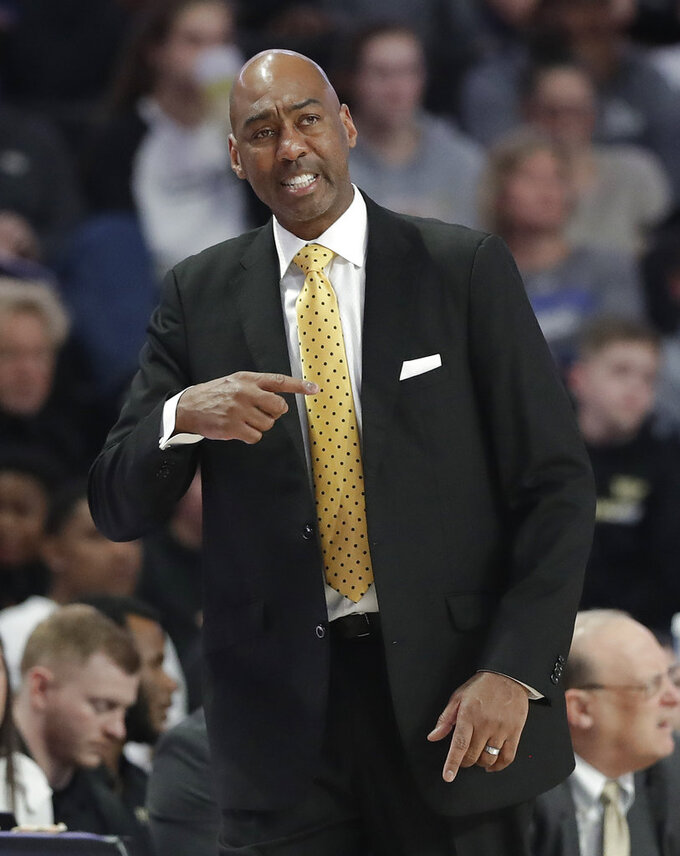 WINSTON-SALEM, N.C. (AP) — Danny Manning might need another miracle to turn Wake Forest back around.

Very little has gone right for his Demon Deacons in a season marked by surprising home losses to Houston Baptist and Gardner-Webb — and they haven't even gotten to the heart of the ACC schedule yet.

If Manning — the eventual top pick in the NBA draft after headlining the "Danny and the Miracles" Kansas team that won the 1988 NCAA Tournament — can't find any answers, Wake Forest (7-7, 0-2 Atlantic Coast Conference) is headed for a fourth losing season in five years under him.

After a 22-point home loss earlier this week to No. 1 Duke, Manning was asked what needs to happen for a turnaround and responded that "we don't have enough time" to list everything.

"There are a lot of different things that go into it," Manning said. "The bottom line is, when you step out on the court, you have to find a way. And you have to be able to compete, and compete every possession. ... It's got to be the mindset that you want to win every possession, and there were too many empty possessions for us."

Both against Duke — and all season long, really.

The Demon Deacons rank as the ACC's worst team in Ken Pomeroy's efficiency rankings. At No. 162 entering Thursday night's games, they're way behind the next-worst team (No. 119 Boston College) and are the only ACC team not over .500.

One big problem: They can't stop anybody. The defense ranks 216th in the Pomeroy ratings, gives up an ACC-worst 74.6 points per game and has allowed three of its last five opponents to shoot 53 percent or better. They lost all three of those games.

"Basketball is a game of runs. Just keep playing," guard Brandon Childress said. "News flash: Every other team we play's going to go on runs the rest of the year. . So throughout the course of the game, you've got to get over that hump, fight through adversity and go on our own run."

Most recently, the Blue Devils shot 58 percent and found their way to the rim with ease, making 17 of 22 attempts inside the 3-point line in the second half of that 87-65 rout. For the season, Wake Forest's opponents shoot 56 percent from 2-point range.

With so many struggles on defense, the offense can't keep up.

It hasn't helped that all three of the top scorers on last year's team could have returned, but didn't. Guard Bryant Crawford (16.9 ppg) and center Doral Moore (11.1 ppg) turned pro early while Keyshawn Woods (11.9 ppg) transferred to Ohio State, where he is averaging just under eight points.

Childress has picked up some of the slack, averaging a team-best 16.9 points, and freshman Jaylen Hoard and sophomore Chaundee Brown have shown why they were five-star recruits. But nobody else is averaging as many as eight points.

As a result, the Demon Deacons continue to struggle against the best teams on their schedule and come up with some clunkers against lesser opponents. In addition to the losses to Houston Baptist and Gardner-Webb , Wake Forest barely held on to beat a Western Carolina team that's now 4-13.

The Demon Deacons have lost nine straight to Top 25 opponents while dropping 25 of 26 against ranked teams with the lone victory in that stretch an upset of No. 8 Louisville in March 2017 — a victory that propelled them to the NCAA Tournament's First Four, the school's only postseason appearance since 2010.

"We've got to dig ourselves out of it," Manning said. "It's what it's all about. This league is a great league. It's the best league in college basketball. This is the league we signed up for. We've got to figure out a way."