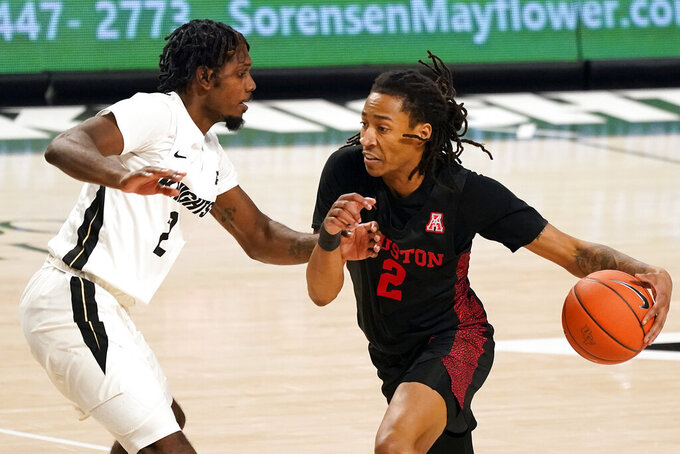 ORLANDO, Fla. (AP) — Kelvin Sampson isn't interested in compiling style points as sixth-ranked Houston navigates the start of the season while dealing with COVID-19 issues that have limited the team's practice time.

It's wasn't pretty Saturday; however, the Cougars (7-0, 2-0 American Athletic Conference) overcame cold shooting with stellar defense to beat UCF 63-54 and deny the Knights (3-2, 1-1) a second win over a Top 25 opponent in a week.

Sampson compared watching the performance in which Houston shot under 38% while holding UCF to just one field goal in the final 8:50 to watching Miss America walking across a stage and noticing she has a bunion on one of her feet.

“I'm not looking at the bunion,” Sampson said. “That's a great road victory.”

Marcus Sasser scored 19 points and Caleb Mills delivered seven of his 12 points in the closing minutes for the Cougars, who have had to deal with coronavirus pandemic-related issues for most of December.

As good as Houston was defensively down the stretch, though, UCF was just as tough on the Cougars.

Mills was the only Houston player to score from the field in the final seven minutes, driving the baseline for a layup that made it 50-45 and adding a three-point play that put his team up 57-48 with just over a minute to go.

“I thought it was a great game,” UCF coach Johnny Dawkins said. “I thought it was more of a fistfight type of a game, but that’s how it’s going to be when you play Houston. They don’t give an inch and you have to go out there with that same type of mindset.

“At the end, it’s a two-possession game going down the stretch and I just thought they finished the game off better than we were able to do,” Dawkins added, “and that was the difference in the ballgame.”

The Cougars went 11 for 11 from the foul line in the final 2:24 to put the game away. Dejon Jarreau hit the last four free throws to finish with 10 points.

Brandon Mahan and Darrin Green Jr. led UCF, but didn't have the type of days they had when the Knights defeated then-No. 15 Florida State 86-74 on the road the previous week. They combined for 52 points against the Seminoles, but had 13 and 12, respectively, against Houston.

“It wasn't a very clean game. But anytime you're on the road and win, it's great,” Sampson said. “That team has been playing well.”

Houston: The Cougars survived their first true road test of the season, improving to 3-0 since resuming play following a 15-day break due to COVID-19 concerns. Four games were either postponed or canceled during the stretch, including a scheduled home date against UCF on Dec. 15.

UCF: A week after beating then-No. 15 Florida State on the road, the Knights were unable to pull off another upset. In just over four seasons under Dawkins, UCF has won five games against ranked opponents. The Knights had three such wins total in the 22-year span prior to Dawkins’ arrival.

Houston: At Tulsa on Tuesday.