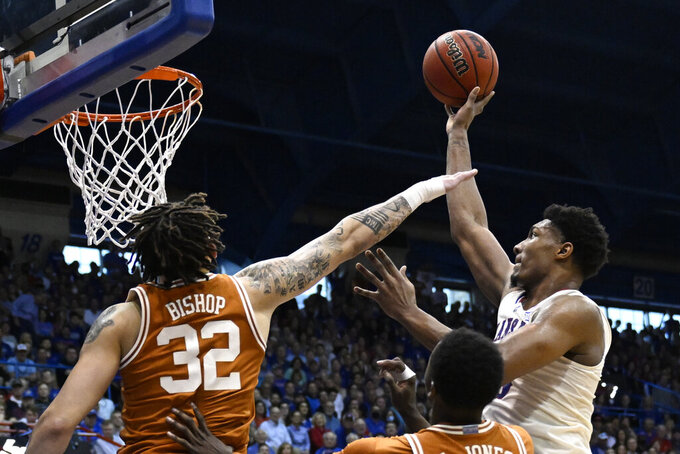 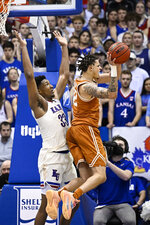 LAWRENCE, Kan. (AP) — Texas coach Chris Beard made the calculated decision to take away the flotilla of Kansas sharpshooters in their showdown at Allen Fieldhouse, where the sixth-ranked Jayhawks were trying to clinch a share of the Big 12 title Saturday.

It worked for 40 minutes.

It didn't work for the 5 minutes of overtime.

With few other options on offense, the Jayhawks turned to bruising big man David McCormack, who responded with a memorable senior night sendoff. He poured in 22 points with 10 boards, going 10 for 10 from the foul line and throwing down the clinching dunk in the extra session, as Kansas persevered for a 70-63 victory.

“You can't take away everything,” Beard said. “If you double McCormack, the shooters are ready. There were a couple possessions we'd like to have back, but give him a lot of his credit. A lot of his field goals were just tough March baskets.”

They will play the Kansas State-West Virginia winner in Thursday's quarterfinal round in Kansas City, Missouri.

The Jayhawks tied the game 61-all when Agbaji, who was 0-for-10 shooting at that point, hit his only field goal with 2:37 left in overtime. Courtney Ramey came up empty at the other end for Texas, and McCormack made two foul shots to give Kansas the lead before Wilson added two more to provide some breathing room.

“It was definitely a battle throughout the game,” he said. “They fought hard. We're playing at home. We knew the stakes on the line. We did what we were supposed to do. It's just a great feeling, all the practices and workouts we put in.”

Ramey finished with 18 points for the Longhorns (21-10, 10-8), who will be the No. 4 seed and open against fifth-seeded TCU in the league tourney. Andrew Jones added 12 points while Timmy Allen had nine on 2-for-15 shooting.

“I'm a big believer in March you need to have three or four special performances,” Beard said. “We get big games from Ramey and Jones and we're kind of missing that third guy today.”

The Jayhawks nearly won the game in regulation.

They drew up the final play for Agbaji, their national player of the year candidate, but he was bottled up and had to call timeout with 2.2 seconds left. Kansas got the inbound to him, too, but the ball was ripped away and ended up with Jalen Coleman-Lands, whose swish from the corner in front of his own bench came just after the buzzer.

The Jayhawks didn't let it come down to the final seconds in overtime.

“We battled one of the best teams in the country," Ramey said, “and just ran out of time.”

Texas controlled most of the first half, going 5 of 8 from beyond the arc after a 3-for-20 performance against the Jayhawks in February. And the Longhorns held Agbaji, the Big 12's leading scorer, to an 0-for-6 effort from the field.

Not exactly the farewell to Allen Fieldhouse that Agbaji had in mind.

Still, the Jayhawks closed on a big run to take a 35-33 lead into the break.

Braun did most of the work: He drilled a tying 3-pointer with just over 2 minutes to go, then knocked down another with a minute left, and should have added a couple free throws if not for a questionable offensive charging foul.

In fact, the officials spent most of the second half trying to wrestle control of a game trending toward a rock fight.

That was reflected in the Longhorns' rapidly worsening foul trouble. By the time Christian Bishop picked up his fourth with 5:21 left, sending Kansas to the double bonus, coach Chris Beard had three on the verge of fouling out: Marcus Carr, his No. 2 scorer, and 6-foot-6 Brock Cunningham, who'd been forced to battle in the paint all game.

It was only fitting that a game nobody led by more than six in regulation came down to the wire.

Jones hit his only 3-pointer to knot it 55-all, then the teams traded free throws, with Ramey making the first of his two with 54 seconds left, putting the game all square and eventually into overtime.

The Jayhawks took care of things from there.

“We needed to beat Texas," Braun said. “It didn't matter if it was ugly.”

Texas sent the Jayhawks to the foul line 36 times, where they made 28 shots, and that proved to be the difference. The Longhorns also committed 15 turnovers and were outrebounded, 49-42.

Kansas was playing for the third time in five days thanks to a rescheduled game against TCU, but the Jayhawks managed to gut out another senior night win. They've won 39 straight since the 1983-84 season.

The Jayhawks and Longhorns prepare to play their quarterfinal games Thursday in Kansas City, Missouri.