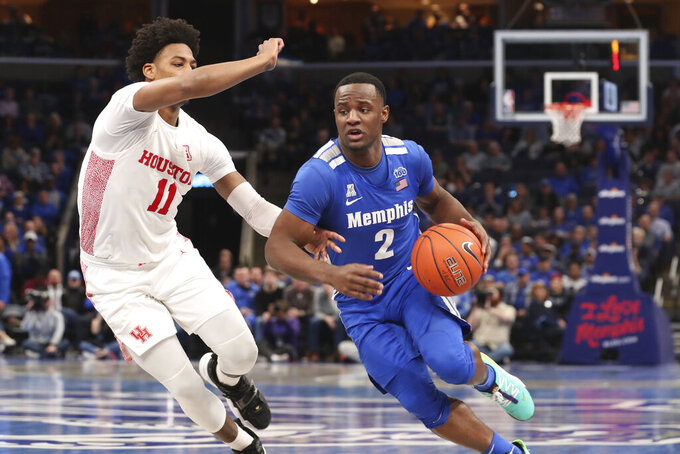 The NCAA announced Wednesday that Memphis' infraction case was referred to the Independent Accountability Resolution Process. This will be the first known case to be handled by the IARP.

The University of Memphis released a statement acknowledging its case had been referred to the IARP.

“The University is committed to compliance with NCAA regulations and wil continue to fully cooperate with this process, which includes withholding further comment until the process is compete,” the school's statement said.

The NCAA suspended Wiseman 12 games early this season because the former five-star recruit's family received $11,500 from former Memphis player and current Tigers coach Penny Hardaway to assist in a move from Nashville to Memphis in the summer of 2017.

Although Hardaway wasn’t Memphis’ coach at the time, the NCAA ruled the payment wasn’t allowed because he was a booster for the program. The former NBA All-Star gave $1 million in 2008 to his alma mater for the university's sports hall of fame.

After the NCAA ruled Wiseman had to sit out 12 games and donate $11,500 to charity to regain his college eligibility, he left Memphis in December.

The IARP was created last year to handle some high-profile cases involving potentially serious infractions. The process includes investigators, advocates and decision-makers with no direct ties to NCAA member schools.

Creating a new process for dealing with some infractions cases was one of several recommendations made in 2018 by the Rice Commission on college basketball. The commission, created in response to an FBI investigation into college basketball recruiting, concluded the NCAA’s existing investigation and enforcement structure was rife with potential and perceived conflicts of interest.

The process uses the Complex Case Unit featuring outside investigators before going to the Independent Resolution Panel, which would select five of its 15 members — who have legal, sports or higher-education backgrounds — to issue a final decision that is not subject to appeal.

There are three ways a case can be referred to the IARP. The school can make the request or the request can come from the NCAA's committee on infractions or vice president of enforcement. The NCAA in its statement did not identify who made the request, only that it had been granted.

The 7-foot-1 Wiseman was considered one of the best recruits in the country, a likely one-and-done college player and future NBA lottery pick. He was the centerpiece of loaded recruiting class that raised expectations for Memphis coming into this season. The Tigers were ranked No. 14 in the preseason AP Top 25.

The NCAA notified Memphis that Wiseman was “likely ineligible” just before the start of the season. He went to court and sued the NCAA and the University of Memphis. He played two games under a temporary restraining order obtained Nov. 8 less than an hour before tipoff of the Tigers' second game of the season.

Wiseman ordered his attorneys to drop the lawsuit Nov. 14, which led to Memphis ruling him ineligible immediately. The NCAA announced the suspension Nov. 20 and denied Memphis' appeal on Nov. 27.

Memphis is 20-9 this season, 9-7 in the American Athletic Conference, and in danger of missing the NCAA Tournament.