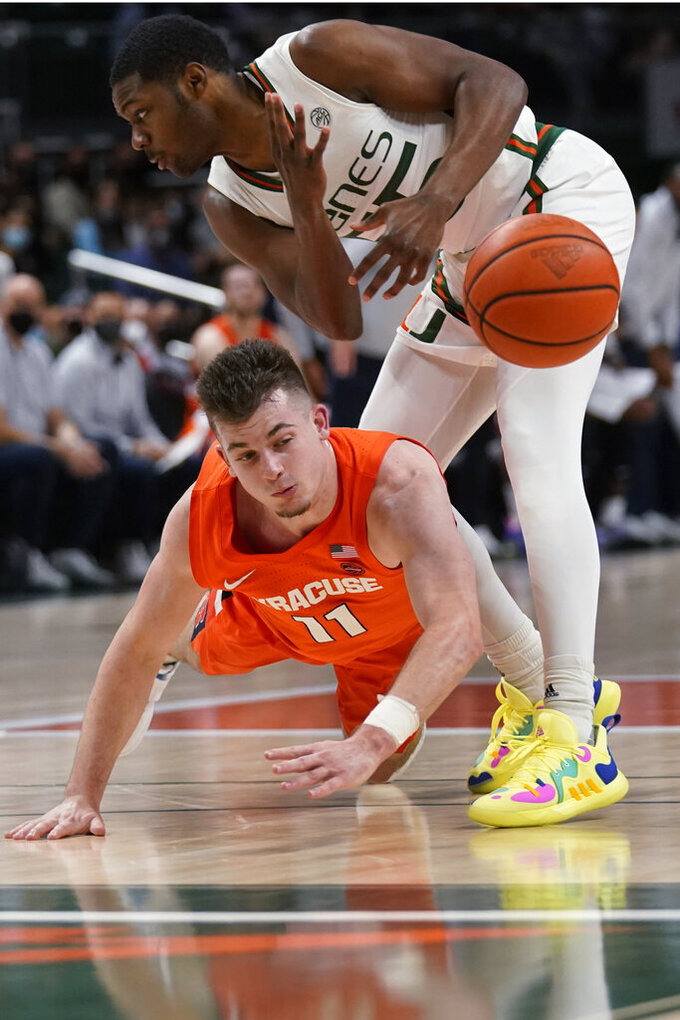 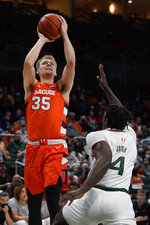 CORAL GABLES, Fla. (AP) — Charlie Moore scored 25 points, Isaiah Wong had all 14 of his during Miami's 58-point second half, and the Hurricanes beat Syracuse 88-87 on Wednesday night for their eighth straight victory.

Miami trailed by as many as 18 points in the first half after 4-for-14 shooting from 3-point range. But the Hurricanes made their first six from distance after halftime, taking the lead, 50-48, for the first time since 8-7. Syracuse missed 5-of-6 shots to start the second half.

Miami took the momentum on Jordan Miller’s lob dunk, followed by Kameron McGusty’s three-point play with 2:24 left for a 76-69 lead. Moore sank a deep 3 with 1:01 left for a six-point lead before Syracuse buried three 3s in the final 11 seconds, including Cole Swider's at the buzzer.

Wong missed his first five shots of the game before converting layups on back-to-back possessions midway through the second half to give Miami a 61-55 lead. Syracuse had a season-high 17 turnovers with 10 minutes left.

Joe Girard led Syracuse (7-7, 1-2) with 26 points and seven 3s. Jesse Edwards had 22 points, eight rebounds and a career-high seven blocks before fouling out late and Swider added 20 points. Buddy Boeheim was held to nine points on 2-of-7 shooting.

Syracuse was 9 of 15 from 3-point range in the first half and led 44-30 at the break behind 14 points from Edwards and 12 by Girard. The Orange finished 17 of 32 from distance but committed 19 turnovers.

Both teams are scheduled to play again on Saturday, with Miami at No. 2 Duke and Syracuse at Wake Forest.