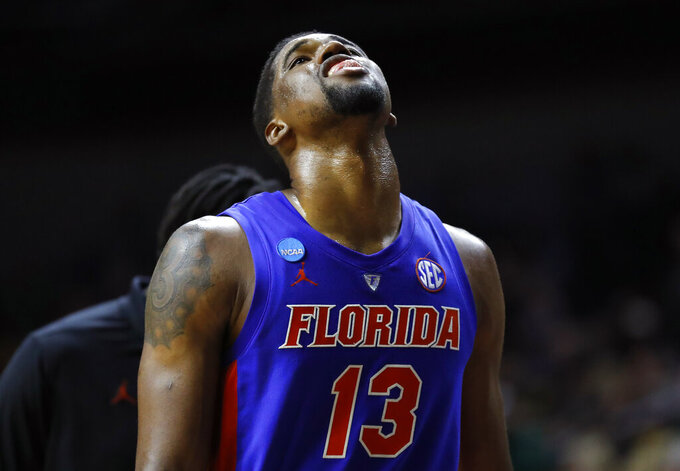 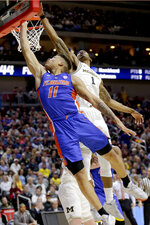 The solution? Beat Florida at its own game.

Michigan is back in the Sweet 16 for the third consecutive year after pulling away for a 64-49 win in the second round of the NCAA Tournament on Saturday. The Wolverines held Florida to its lowest point total of the season.

"Holding this team to 49 points is incredible," Michigan coach John Beilein said. "That's how we won the game."

The 10th-seeded Gators (20-16) shot just 29 percent in the second half and 34.5 percent for the game as Michigan, the No. 2 seed in the West Region, advanced to the Sweet 16 for the fifth time in the last seven years. The Wolverines are the 2018 national runner-up.

"Guys playing one-on-one sun-up to sundown," he said. "Nobody wanted to get embarrassed and get talked about the next day."

The matchup of two of the nation's highest-ranked defenses often produced rag-tag play. Florida played its usual combination defenses and caused confusion — Ignas Brazdeikis had an entry pass intended for him sail right past him out of bounds, and the 7-foot-1 Jon Teske fumbled the ball down low repeatedly as the Gators swatted at it.

Even so, the Gators couldn't slow Poole, who made four 3-pointers, or overcome their poor shooting.

"I thought they were super disruptive on the defensive end," said Jalen Hudson, who led the Gators with 11 points. "It was pretty hard for us to get into the lane and really shake them."

Zavier Simpson had nine points, nine rebounds and nine assists, while Teske had eight points to go with 10 rebounds.

Florida kept it close with its 3-point shooting in the first half, but Brazdeikis' 3-pointer started an 11-0 run to open the second that put Michigan up 43-28.

"We made some adjustments at halftime," Matthews said. "We wanted to shut off the water. The coaching staff did a great job and we just followed the plan."

Florida wasn't done, though. The Gators scored nine straight points to close the gap before Poole was fouled shooting a 3 and made all three free throws.

The Michigan lead was back to double digits when Livers took a bounce pass from Brazdeikis, drove on Kevarrius Hayes, got fouled and made the free throw with 7 ½ minutes left.

The Gators kept it close in the first half by making 6 of 12 3-pointers. But they missed eight of their first nine from distance in the second half and eventually tired against the bigger Wolverines.

Michigan outscored the Gators 13-5 to end the game and finished with authority as Isaiah Livers and Poole thrilled their cheering section with thunderous dunks.

"Second half it got away from us," Florida coach Mike White said. "We didn't make the best decisions offensively. I thought we played really hard second half and left it on the floor. Playing behind the second half, we expended a lot of energy."

Florida: The Gators played one of the toughest schedules in the country and turned it up at the end of the season after finishing eighth in the Southeastern Conference. Florida upset LSU to make the NCAA Tournament for a third year in a row under White. The Gators beat Nevada in the first round but met their match against a Michigan team that mixes a lockdown defense with an offense with multiple threats.

Michigan: Michigan's only three losses since mid-February were to Michigan State. The Wolverines are 30-3 against everybody else this season.

Brazdeikis, the Big Ten freshman of the year, never quite got going. He missed five of his first six shots and went to the bench with his second foul with 3:50 left in the first half.

Michigan went right to him to start the second half. He launched a 3 from the top of the key that popped up out of the basket and dropped straight through, with the big freshman running backward down the court with both arms raised. He never scored another point, but his bucket started an 11-0 run that put the Wolverines up 43-28.

Michigan: The Wolverines play a West Region semifinal in Anaheim, California, Thursday against the winner of Sunday's game between Buffalo and Texas Tech.