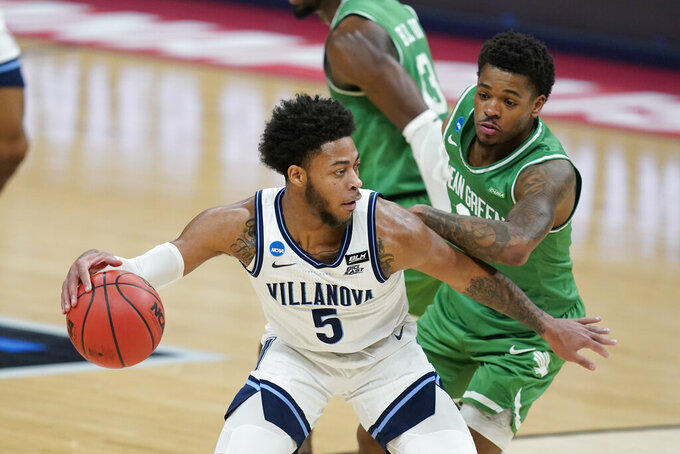 Villanova's Justin Moore (5) is defended by North Texas' Javion Hamlet (3) during the first half of a second-round game in the NCAA men's college basketball tournament at Bankers Life Fieldhouse, Sunday, March 21, 2021, in Indianapolis. (AP Photo/Darron Cummings)

INDIANAPOLIS (AP) — Villanova spent all season operating with the security of having senior point guard Collin Gillespie leading the attack. Michigan knew it could depend on versatile veteran Isaiah Livers.

Now the Wildcats and Wolverines have figured out how to win without them in the NCAA Tournament.

Gillespie is out with a serious knee injury suffered in the regular season's final week. Livers is out indefinitely with a foot injury diagnosed during the Big Ten Tournament. And both teams are in the Sweet 16 after successfully adjusting so far to those major late-season hits.

“Obviously things are going to happen in the season, but we just try to stay consistent,” said Michigan’s Brandon Johns Jr., a starter with Livers out. “We try to work together at all times. And we just work on it in practice and everything, just to keep the flow going and try to instill that confidence in everybody to step up. It’s been working, so we’ve just got to keep it rolling.”

It hasn’t been easy for either team. But they're still advancing, with the fifth-seeded Wildcats meeting top-seeded Baylor in Saturday’s South Region semifinal and the No. 1-seeded Wolverines facing Florida State the following day in the East.

“There’s no feeling sorry for ourselves,” Villanova forward Jermaine Samuels said after the second-round win against North Texas. “There’s no being down on ourselves, blaming each other for anything, it’s just the next challenge, next man up, and keeping that laser focus on trying to be the best team we can be. And whatever happens, happens.”

Gillespie provided Villanova with scoring (14 points), playmaking (4.6 assists) and 3-point shooting (nearly 38%). But he went down in the first half against Creighton on March 3 with a torn medial collateral ligament in his left knee, with Villanova then losing at Providence to close the regular season and then to Georgetown in the Big East Tournament.

In the NCAA Tournamet, however, Justin Moore — who assumed duties at the point — scored 15 points in each round after averaging 12.6 entering the tournament, while sophomore Chris Arcidiacono – whose older brother Ryan helped the Wildcats win the 2016 NCAA title – is now starting.

Leading scorer Jeremiah Robinson-Earl has also stepped up as a playmaker, tallying six assists – matching his career high – in each win. Meanwhile, coach Jay Wright has found a way for Gillespie to contribute from afar by having him compile his own Baylor scouting report, with hopes Gillespie and fellow injured senior Dhamir Cosby-Roundtree (sidelined all year) join the team Saturday.

“We were all, myself included, just so comfortable with (Gillespie) leading the way for us in everything we did,” Wright said. “I would consult with him about decisions we’d make about travel, about days off. He was such a big part of it.

“So it took us a while. But I think that Jeremiah Robinson-Earl and Jermaine Samuels have really stepped up and just kind of taken over the leadership of his team. It’s pretty impressive to watch.”

For Michigan, the 6-7, 230-pound Livers is a senior captain averaging 13.1 points and 6.0 rebounds while shooting 43% from 3-point range. But he hasn’t played since the Wolverines won their Big Ten Tournament opener.

Coach Juwan Howard said after Sunday’s win against LSU that it would take multiple Wolverines to step up to cover for Livers’ impact in multiple areas.

Johns, a 6-8 junior, has tallied 18 points and three blocks through two NCAA games after averaging 4.1 points coming in. And against LSU, senior guard Eli Brooks and Wake Forest senior transfer Chaundee Brown Jr. each came through with season highs of 21 points.

It will take more of those types of performances for the Wolverines and Wildcats to stick around.

“When you have a family member that goes down with an injury, everyone pulled together to help that particular player go through the experiences of what he’s dealing with,” Howard said. “And it’s not easy, it’s very hard. So when it comes to playing out there on the floor, there’s a lot of moments in practice where you see your team and see what each guy provides to help the team in any ways to impact winning.

"We have a very deep roster. So the next-man-up mentality is never to disrespect a player's injury, (it's) to always feel that you got your brother’s back.”