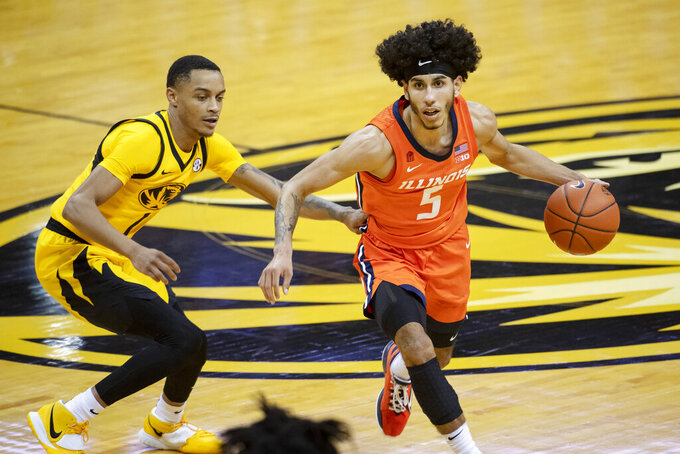 Luckily for the Tigers, there wasn't much else from the Fighting Illini to worry about.

Missouri held off a late charge from No. 6 Illinois and overcame 36 points from Dosunmu for an 81-78 victory Saturday night.

Dru Smith had 17 points, Javon Pickett had 14 points and five rebounds and the Tigers held on in the annual “Braggin’ Rights” rivalry game.

Missouri (5-0) led 49-41 at halftime and held on for its third straight win in the series. Illinois (4-2) trailed by 13 with nine minutes left but rallied to tie it before the Tigers closed out the upset.

“They’re tough. They’re basketball players,” Missouri coach Cuonzo Martin said of his team. “They’ve took some lumps. Injuries, tough losses and all of that, we’ve taken our lumps. ... I thought our guards did a great job blocking out and being physical.”

Dosunmu set a career high in scoring on 13-of-20 shooting, and Kofi Cockburn had 19 points with six rebounds for Illinois. Andre Curbelo added in 14 points off the bench.

“Our lack of energy, our lack of effort, is beyond explanation,” Illinois coach Brad Underwood said. “Offensively, when one player has 36, we’re not going to win. That’s an imbalance that I don’t like.”

Missouri guard Xavier Pinson ended the Tigers’ seven-minute field goal drought on a spinning floater with 51 seconds left to make it 80-76. Cockburn threw down a dunk on the next possession, but that was waved off and he was given a Flagrant 1 foul after the 7-footer clipped Missouri’s Mitchell Smith.

The Tigers ran down the clock before Kobe Brown air-balled a 3-pointer. Dosunmu took the ensuing inbounds pass the other way and missed an off-balanced 3 that was grabbed by Brown, who missed two free throws. Dosunmu tried to get off another late heave, but couldn’t release in time.

“I heard their coach screaming, ‘Foul!’ so I got in my shooting motion,” Dosunmu said of the 3-pointer following the inbound. “I thought (the defender’s) hand got in there and I thought there was going to be some contact.”

The teams combined for 52 fouls. That meant plenty of trips to the foul line, where Missouri — which set a NCAA record for most consecutive foul shots made last season — vastly outperformed Illinois, shooting 84% to the Illini’s 61%.

The game was played in Columbia as challenges related to COVID-19 prevented the game from being held in its normal location of the Enterprise Center in St. Louis. Mizzou Arena was chosen as the game site via a coin flip between it and Champaign’s State Farm Center in a streamed event last month.

Dosunmu’s scoring barrage shattered his previous career high, a 28-point outing he had against North Carolina A&T in the Illini’s opener Nov. 25. However, with the exception of Curbelo, the preseason All-American didn’t get much help in the backcourt. Trent Frazier finished with four points, Da’Monte Williams with three points and Adam Miller with two points on a combined 3-of-12 shooting.

Mark Smith, who played his freshman year at Illinois before transferring to Missouri, was fairly quiet as he finished with five points before fouling out with 5:21 remaining. Jeremiah Tilmon, who initially committed to the Illini out of high school, also struggled in limited minutes due to foul trouble as he ended with three points and two rebounds as he also fouled out with 1:54 to play.

Missouri: The Tigers won a game against their highest-ranked foe since beating then-No. 5 Florida on Feb. 19, 2013. Picked to finish 10th in the SEC, the Tigers continued their surprising 5-0 start by snatching their second ranked win of the season, the first against then-No. 21 Oregon on Dec. 2 in Omaha, Nebraska.

Illinois: Brad Underwood is now 1-3 against Missouri as the Fighting Illini’s head coach, with Saturday marking a deflating end to a nonconference slate that featured a dominant 83-68 win at No. 10 Duke earlier in the week. The Illini shot 23% from 3-point range, a stark contrast to the 63.6% clip from deep they maintained against the Blue Devils.

Missouri: Plays at home against Prairie View A&M on Friday.