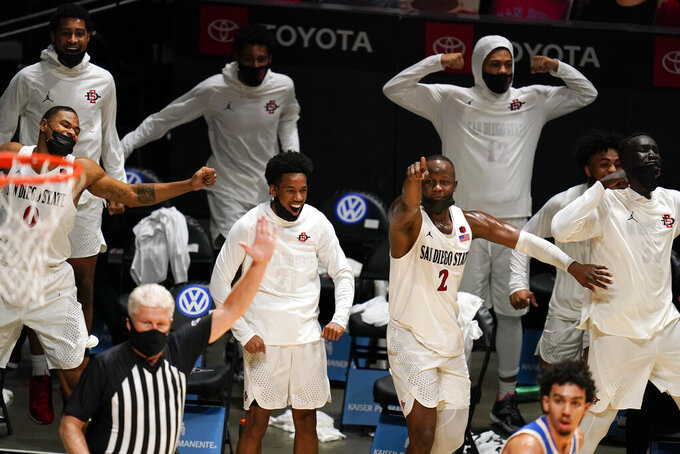 San Diego State players on the bench react during the final minute of the team's 73-58 win over UCLA in an NCAA college basketball game Wednesday, Nov. 25, 2020, in San Diego. (AP Photo/Gregory Bull)

SAN DIEGO (AP) — Mick Cronin might not be so eager to bring UCLA back to San Diego State anytime soon after his short-handed Bruins were given a rude welcome by the deep, disruptive Aztecs coached by old friend Brian Dutcher.

Matt Mitchell and Jordan Schakel scored 15 points apiece and SDSU used a suffocating defense and 3-point shots to humble 22nd-ranked UCLA 73-58 on Wednesday night in the season opener for both teams.

Mitchell and Schakel hit 3s early in the second half to open a 40-28 lead and the Aztecs dominated the rest of the way at empty Viejas Arena. Aguek Arop and Terrell Gomez scored 10 points each for San Diego State, which was 30-2 last season and expecting its highest seed ever in the NCAA Tournament before it was canceled due to the coronavirus pandemic.

“It’s a first step. We’re excited to come away with a victory and happy as heck that we’re actually playing basketball. It’s been 264 days since we played," Dutcher said.

“We've always had a defensive identity and I think that showed again tonight. The good news is, as well as we played, there's a lot of room for growth with this team, at both ends of the floor.”

UCLA, which played on SDSU’s home court for the first time since December 1991, was without key players Jalen Hill and transfer Johnny Juzang. Chris Smith, the Bruins’ only senior, committed his fourth foul midway through the second half and came out — and then fouled out with 4:47 to go. He scored 10 points, none after halftime.

The game was part of a multi-team event that also includes Pepperdine and UC Irvine. UCLA and SDSU had been scheduled to play in a bubble in Orlando, but it fell apart. Longtime pals Dutcher and Cronin quickly put together this event.

“Our physical effort was bad and our mental effort was maybe worse, if that’s possible,” the second-year Bruins coach said.

“We got outplayed physically. I’ve been doing this a long time. ... You go on the road and just get physically beat up the way we got beat up, and our defense was atrocious. We didn’t follow the scouting report at all. We got beat off the dribble, we walked away from shooters, we did mind-boggling stuff, to be honest with you. Like, total regression. I don’t know if that’s borne out of overconfidence — I don’t know what that’s borne out of. But obviously I have to fix that immediately.”

Mitchell and Schakel each hit three 3-pointers, and the Aztecs, picked to repeat as Mountain West Conference regular-season champions, went 9 of 23 from behind the arc.

The Bruins, who went 19-12 last year and were picked to win the Pac-12 this season, played well for the first eight minutes before SDSU's defense began to take its toll.

Mitchell hit a jumper to start an 8-0 run midway through the first half that gave the Aztecs a 23-19 lead. Joshua Tomiac made a jumper and fellow senior transfer Gomez hit two free throws before Nathan Mensah sank a baseline jumper.

UCLA ended a six-minute drought when Smith made a one-handed jumper.

Jacquez made a layup to pull the Bruins to 30-28 and was fouled, but missed the free throw. Arop hit a layup and two free throws in the final minute for a 34-28 halftime lead.

“I just think we have great depth,” Dutcher said. "We used a lot of guys, 10 guys, and we don’t drop off much. This might be as deep a team as we’ve ever had. UCLA was short-handed. They were missing two players, potentially two starters, so I just think we wore them down. We picked them up full court the entire game and I think we just wore them down to the point where maybe they were on tired legs by the end of the game.”

Asked if his players were bothered by the faux crowd noise at usually raucous Viejas Arena, Cronin said: “The problem wasn’t the crowd noise. The problem was San Diego State, their toughness, their execution.”

UCLA: Hill, a 6-10 swingman, has right knee tendinitis and is day-to-day. Juzang, a transfer from Kentucky, has a stress reaction in his right foot and isn't expected to play this week.

San Diego State: The Aztecs used their trademark tough defense during the first half to force UCLA into 10 turnovers and a scoring drought that allowed SDSU to take the lead.

UCLA plays Pepperdine on Friday. UCLA has won the last five meetings for a 19-4 series lead.

SDSU faces UC Irvine on Friday for the first time since 1997. The Aztecs have won three straight in the series.