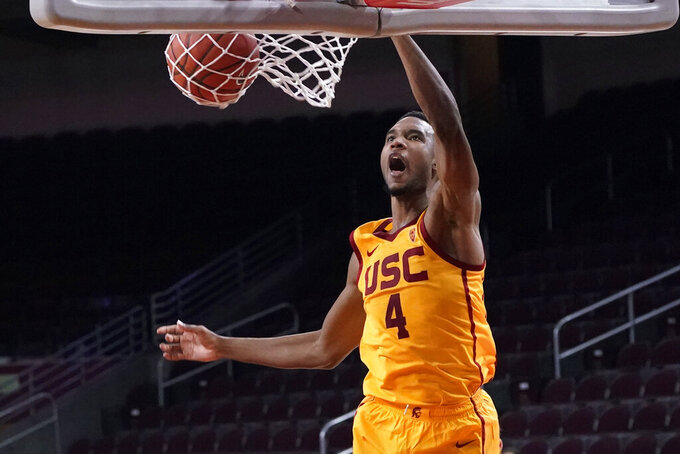 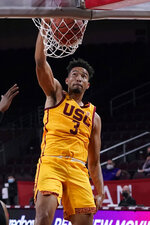 The Mobley brothers came up big for the second straight game. Freshman Evan had 20 points, 11 rebounds and six blocks and older brother Isaiah had 16 points and 12 rebounds in an overtime win against UC Riverside earlier in the week.

The Trojans jumped on the Huskies from the opening tip, scoring seven straight points. The Mobleys dominated an early stretch, combining for 12 consecutive points that gave USC a 22-8 lead. The Trojans made their first seven shots, while holding the Huskies to a 3 for 13 start.

“It puts less pressure on me because they got to focus on him,” Evan said of his brother. “I’m glad he was on fire and I’m glad we were hitting tonight.”

The Trojans led by 21 at halftime. The Huskies were limited to 23 points in the half while shooting 25% and committing 10 of their 16 turnovers.

The Huskies cut their deficit to 14 points to open the second half, but USC responded with a 9-0 run and Noah Baumann added a 3-pointer that kept the Trojans ahead by 24.

Evan Mobley dunked one-handed off a bounce pass before he and his brother left the game with about six minutes remaining.

“We had a great chemistry this game,” Evan said of his brother. “Anytime I got in the middle, I saw him down low and I threw it up and he finished.”

The brothers sat down and watched as Drew Peterson and Chevez Goodwin had back-to-back dunks that helped USC top 90 points for the third time this season.

Washington: The Huskies remain in search of their first league win, and it appears unlikely to happen this weekend. They visit UCLA to complete a four-game road trip, and the Bruins are coming off a 30-point win against Washington State.

USC: The Trojans are rolling since returning from a two-week break caused by a positive COVID-19 test in the program. They've won six of seven since shortly after Christmas.

USC guard Ethan Anderson returned after missing eight games because of back spasms that first surfaced in early December. He had three points, two assists and one turnover in 14 minutes, playing seven minutes in each half.

“He just needs to get in playing shape and get acclimated back to the speed and intensity,” USC coach Andy Enfield said, noting Anderson has only practiced once with the team.

Anderson's minutes will be restricted on Saturday, too.

Enfield was discussing how this season doesn't count toward a player's eligibility because of COVID-19, giving athletes the option of returning for another season. He then joked that everyone would be back, but quickly clarified the younger Mobley's plans.

“Evan is not going to come back,” he said, confirming what has long been expected.

The younger Mobley is expected to be a high pick in the NBA draft.

Washington: At UCLA on Saturday in a match-up of the Pac-12's first and last-place teams.

USC: Hosts Washington State on Saturday. The Cougars have lost eight in a row to the Trojans.