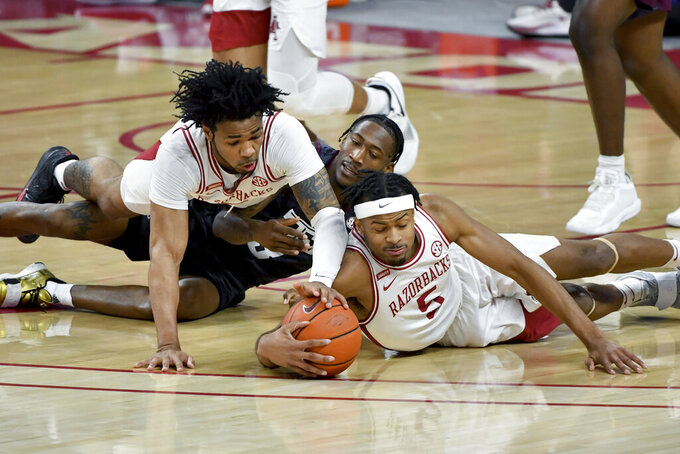 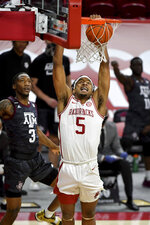 “The general fan doesn’t understand how hard it is to win 11 games in a row in league play,” Arkansas coach Eric Musselman said. “Trust me, it’s difficult. Did we play great tonight? No. We played well enough to win and we buckled down the stretch when we had to get defensive stops.”

Arkansas (21-5, 13-4) trailed by two until Moody sank a 3-pointer with 56 seconds left, prompting Texas A&M to take a timeout. Davonte Davis stole the ensuing inbound pass, threw it up the court to Justin Smith, and Smith threw down an emphatic, two-handed dunk.

Quenton Jackson’s 3-pointer from the corner on the next possession rimmed out, and Arkansas finished the game from the free-throw line.

Smith’s dunk marked the first time either team led by more than three points in the final 13 minutes. Musselman said he wanted to take a chance.

“We talked about trying to get a piece of the ball as the guy guarding the inbounder with our staggered jumps,” he said. “We were willing to gamble a bit instead of sit back and concede an inbounds pass. They were in the bonus and we didn’t want to foul and sometimes you can be overly aggressive.”

Moody, a freshman, tied his career high for points, while Tate finished three points shy of his best.

Seconds before the under-12 timeout of the second half, Moody found Tate at the elbow, and the senior made a jumper to give Arkansas its first lead, 58-57.

Davis and Justin Smith joined Moody and Tate in double figures for Arkansas with 12 and 11, respectively.

Moody ended his freshman regular season as the fourth leading scorer in the SEC and also had the fourth highest field goal percentage in the league among guards. Musselman made his pitch for his first-year wing as SEC Player of the Year.

“He’s played as good as any player in the entire country," Musselman said.

Arkansas’ rally was largely spurred by the aggression on defense. The Razorbacks forced 11 second-half turnovers and scored nine points from them. They also cut Texas A&M’s fast-break points from 11 in the first half to three in the second.

Arkansas is playing for NCAA Tournament seeding and a potential SEC Tournament crown, a trophy the Razorbacks have captured only once, in 2000. They’re likely a top-six for the NCAAs but could play their way into a top two or three with a deep SEC run.

The game was only Texas A&M’s second since Jan. 30 as postponements prompted by COVID-19 protocols sapped half the Aggies’ season. Still, the .200 winning percentage in league play was the team’s worst showing since joining the SEC in 2012-13.

Arkansas was locked into its No. 2-seed for the SEC Tournament before Saturday’s result. The Razorbacks’ first game of the postseason will be Friday against the winner of the No. 10-seed and No. 7-seed game.