Moore, Samuels lead No. 19 Villanova to rout of Creighton 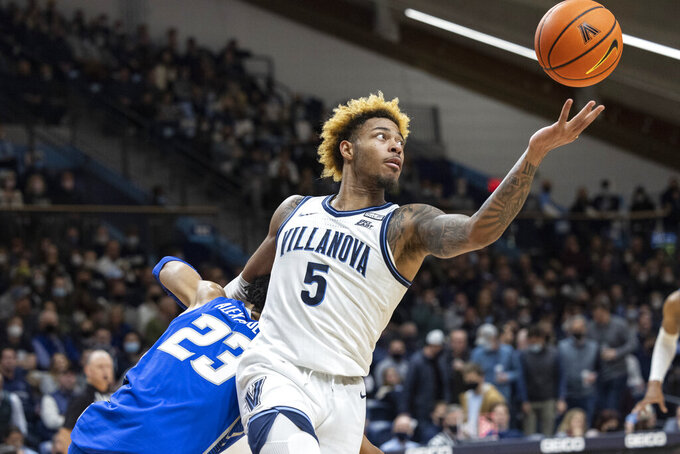 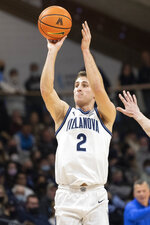 Justin Moore scored 22 points and Jermaine Samuels added 18 to lead the 19th-ranked Wildcats to a 75-41 blowout of Creighton on Wednesday night.

Collin Gillespie had 11 points and Brandon Slater chipped in with 10 for Villanova (10-4, 3-1 Big East), which has steadied itself with three straight wins following consecutive losses by a combined 41 points. The Wildcats avenged a 79-59 defeat at Creighton on Dec. 17.

“You get beat like that, if you’re humble and you’re smart, you learn,” Villanova coach Jay Wright said. “If you’re arrogant, you just kind of dismiss it.”

“We looked like a bunch of young kids tonight,” Creighton coach Greg McDermott said. “They were more physical, more disciplined and the score certainly was reflective of that.”

The Wildcats were ranked No. 9 when they lost the first matchup against the Bluejays.

“I don’t want to bore you, but I could go on forever,” Wright said when asked what happened in the first meeting.

Clearly, the Wildcats weren’t in a friendly mood for the rematch.

“Yeah, for sure, we definitely did get out-toughed in the first game,” Samuels said. “And we just learned from it. The film said it all, the game said it all. We took ownership of that loss and came to work the next day and continued to get better.”

After a dominating 8½-minute stretch in the first half that helped Villanova enter the break up 14 points, the Wildcats burst out of the locker room by scoring the first 10 points to take a commanding 46-22 lead with 17:34 left on Bryan Antoine’s 3-pointer.

Moore keyed the second-half spurt, making a 3-pointer, then a layup and, finally, a step-back jumper for his own personal 7-0 run to start the half. Meantime, the Wildcats — just as they did in the opening 20 minutes — furiously pestered the Bluejays on defense and forced them to miss their first four shots to start the second.

The 24-point margin was plenty of cushion for the Wildcats, who had taken over with just more than 10 minutes left in the first.

“Definitely wanted to come out and set the tone right away in the second half,” Moore said. “No letup.”

Ryan Nembhard’s jumper pulled Creighton to 18-17 with 10:22 left in the first, and then Villanova took control. The Wildcats put the clamps on the Bluejays’ shooters, holding Creighton to 1 for 8 from the field and forcing four turnovers during a 16-3 run over the next 8:35 that ended with Moore’s layup that put Villanova ahead 34-20. The Bluejays went 12 straight possessions with just one shot or a turnover.

“We tried to focus on pressuring them and not let them get deep in the paint, being tough and physical,” Moore said.

The Wildcats entered the break up 36-22 after forcing 10 turnovers and holding Creighton leading scorer Ryan Hawkins to one missed field goal attempt. Villanova played the final 10:50 of the first half without point guard Gillespie, reigning Big East player of the week, due to foul trouble.

Hawkins, a transfer from Division II NW Missouri State, where he won three national titles, scored 19 points against Villanova the first time and entered leading the Bluejays in points (14.5 ppg) and rebounds (7.5 rpg) but went scoreless this time, missing all six of his tries, with five rebounds. Hawkins’ college career totals stand at 2,286 points and 1,051 rebounds.

The Bluejays were playing just their second game since their home rout of Villanova due to COVID-19 issues that forced the postponement of a pair of Big East contests against DePaul and Georgetown.

Creighton: The surprising Bluejays, who have no returning starters and were picked in the preseason to finish eighth in the 11-team Big East, will look to shake this one off and build on their early-season momentum with four of their next six scheduled games at home.

Villanova: After a long layoff between a 71-58 home win over Xavier on Dec. 21 and a 73-67 victory at Seton Hall on Jan. 1 following the postponement of a scheduled Dec. 29 game against crosstown rival Temple, Wright likes the way the Wildcats are back in a rhythm of practicing for a few days and then playing. He hopes the fact that the entire staff and players are vaccinated and boosted will help continuity of the schedule.

Wright and the Wildcats have had more trouble against Creighton than anyone else, as the Bluejays’ six victories against Villanova represent the most of any Wildcats opponent since 2013-14.

The win upped Wright’s mark to 500-193 at Villanova, where he has led the Wildcats to two national titles in 21 seasons.

Wright has a career mark of 622-278 after beginning his career with a 122-85 record in seven seasons at Hofstra.

Villanova: G Caleb Daniels (health and safety protocols) missed his second straight game. Wright said Daniels could return for Saturday’s game at DePaul. The 6-foot-4 guard is averaging 9.5 points and 3.9 rebounds off the bench. He was in street clothes and seated on Villanova’s bench during the game.

Villanova: At DePaul on Saturday.