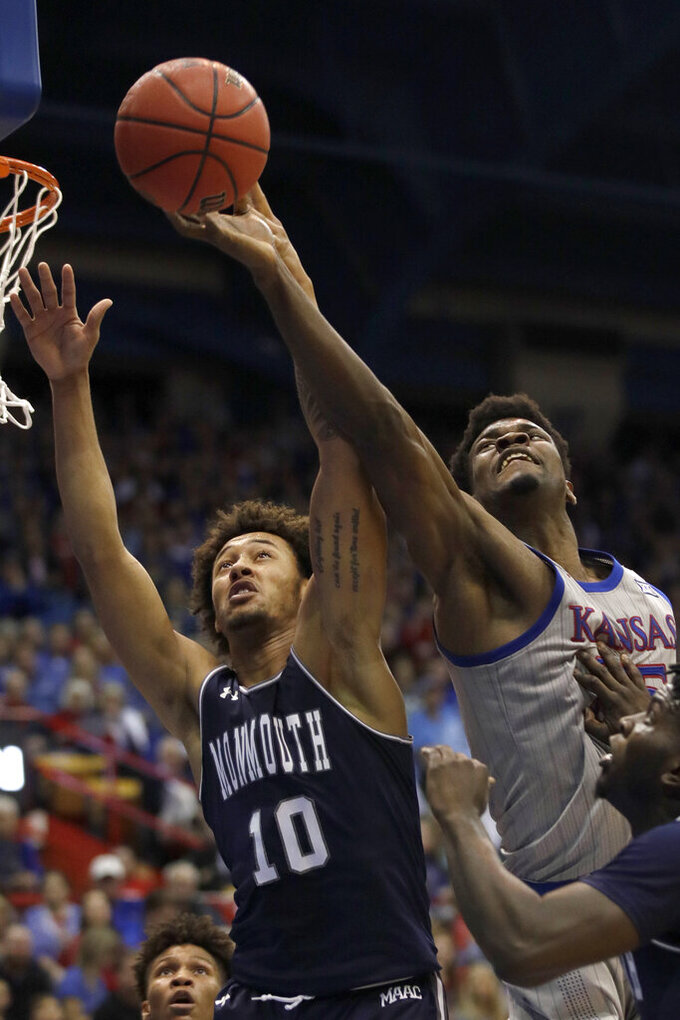 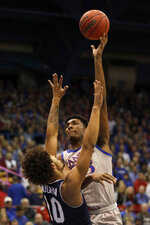 LAWRENCE, Kan. (AP) — Kansas was seconds away from another lopsided win in Allen Fieldhouse when Monmouth’s George Papas stole the ball from freshman Tristan Enaruna and ran the other way for a dunk, triggering a minor scuffle under the bucket.

It was the most fight the Hawks showed all night.

Isaiah Moss poured in 21 points to lead six Jayhawks in double-figure scoring, and No. 5 Kansas romped to a 112-57 victory over its undersized and outclassed MEAC opponent Friday night.

“I’m a super, super competitive guy,” Monmouth coach King Rice said, “and we lost our cool a little bit here tonight at the end of the game. We were down by 100 points. We get a dunk and we bark at the kid — that is uncalled for. That is not what our program represents.

“You get beat by a better team,” Rice said, “you shake their hand, you walk off the court.”

Jayhawks coach Bill Self wasn’t too worried about it, though.

“I’m actually glad it happened,” Self said, “because we’ve been on Tristan the whole time about being casual. That’s a prime example of being casual.”

Then again, the whole win was a casual affair for Kansas.

Moss, who missed the season opener against Duke because of an injury, was 5 of 6 from beyond the arc as the Jayhawks (2-1) ran their home winning streak to 23 straight games. The streak is the third-longest in the nation behind only Tennessee (28) and Gonzaga (25).

Deion Hammond had 17 points to lead the Hawks (1-3), who didn’t make a field goal until midway through the first half. George Papas had 12 points and Ray Salnave added 11.

The Jayhawks, who got off to a sluggish start against UNC-Greensboro, had no such trouble against the Hawks. They scored the first nine points, pushed their opening run to 21-2, and added an alley-oop dunk and a deep 3-pointer before Monmouth finally made a shot.

“We just wanted to bring energy,” Moss said. “It starts with defense, just talking, and then letting the game come to us offensively.”

The end of the half was just as lopsided: After the Hawks got within 41-19 on Hammond’s 3-pointer, Kansas began an 18-2 closing run capped by Azubuike’s dunk in the final seconds.

Part of the big lead came through efficient offense and excellent defense by Kansas.

Part of it came by way of Monmouth’s offensive ineptitude.

The Hawks missed their first 12 shots, throwing up an airball, shooting a jumper over the backboard and blowing a layup along the way. At one point they had nearly as many turnovers (four) as shot attempts (five), and they finished the half 6-for-26 shooting with 12 turnovers.

Monmouth added whistles to its long list of problems in the second half.

The Jayhawks scored the first six points out of the locker room, and the Hawks’ only recourse was to slow them down with fouls. Kansas hit the bonus with 15:20 left in the game.

Salnave was 1 for 10 from the field but 9 of 10 from the foul line for Monmouth. ... The Hawks are 1-17 all-time against ranked teams. ... Kansas committed just seven turnovers. It had 28 in its opener against Duke. ... They Jayhawks had a 66-33 advantage in points off the bench.

Monmouth gave Kansas State all it could handle earlier this week, leading another Big 12 foe at the half. But the Hawks fell apart over the final 20 minutes and evidently never put it back together.

Kansas got little more than a glorified practice out of Friday night, but tougher tests are coming fast. The Jayhawks have one game left before heading to Maui.