Move Over Nike, Call Under Armour 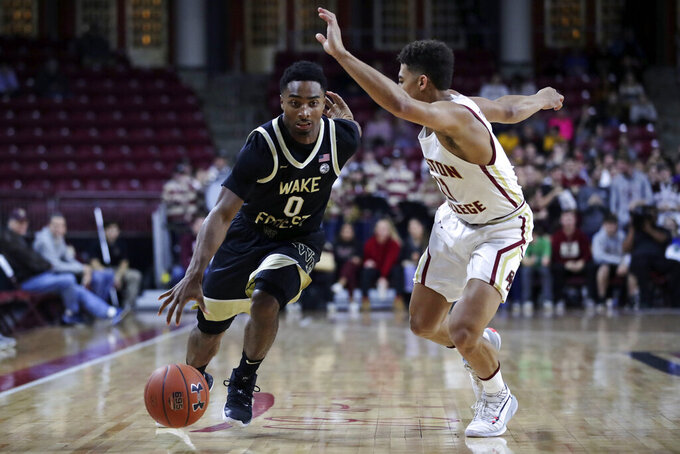 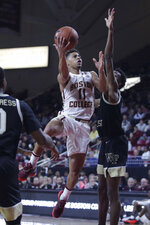 Boston College graduate transfer guard Derryck Thornton made a quick cut near the foul line driving toward to the lane and split the bottom of his left Under Armour sneaker during the first half of Wednesday night's season-opening 77-70 win over Wake Forest.

It didn't seem to bother him at all. The transfer from USC scored a career-high 23 points, going 7 of 14 from the floor, hitting 2 of his 3 shots from beyond the 3-point line.

So where is the ruined shoe, now?

"Trash somewhere," he said. "It just busted. I'm not really sure."

When the 6-foot-3 guard backed out and dribbled out to midcourt, he looked down and the bottom of his sneaker was slightly hanging off. During a timeout, he took off the white sneakers and put on a pair of maroon ones and stayed in the game.

He warmed up in the maroon pair, played the start of the game with the white ones that had the left one split, and had to go to his backups.

Last season, then-Duke star Zion Williamson made a quick move at the foul line against North Carolina and suffered a mild sprain of his right knee when his left Nike sneaker came apart, forcing him into an awkward-almost-split.

Thornton remembered how big a deal that became nationally.

"I think I was at a restaurant with my team," he said. "I remember the whole restaurant went crazy. I don't think mine was as exciting."

He understands it can happen and now he might be a footnote on Twitter compared to Williamson's sneaker moment.

"I think it just happens," Thornton said. "They're both great companies. Kind of happens when you're playing hard out there."

Williamson was the NBA's first overall pick by New Orleans in June.