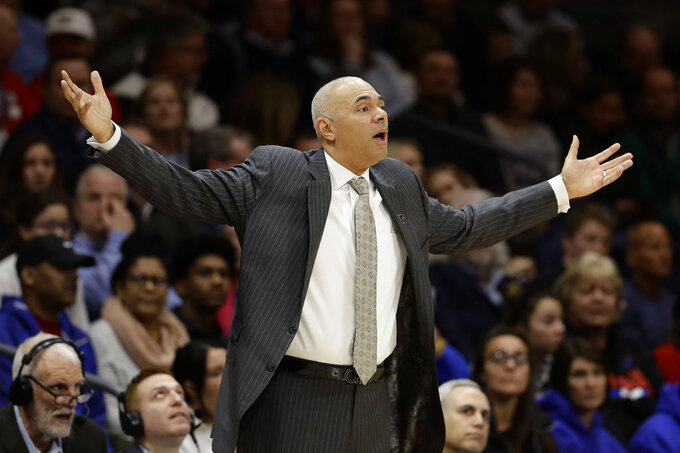 DePaul head coach Dave Leitao reacts to a call during the first half of an NCAA college basketball game against Villanova, Wednesday, Jan. 2, 2019, in Villanova, Pa. (AP Photo/Matt Slocum) 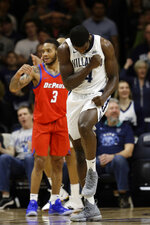 VILLANOVA, Pa. (AP) — The upset threat is always in play this season against Villanova. The national champions have been stunned and stymied by teams they might have squashed over the last 10 years.

But DePaul is DePaul for a reason and Villanova — even in a season where departures have stunted their dominance — is still not going down to the Blue Demons.

Eric Paschall scored 24 points and Phil Booth connected in the clutch to lead Villanova to its 17th straight win over DePaul, 73-68 on Wednesday night.

"We've got a resilient group," Booth said. "We've been down a lot this year."

Yes, the Wildcats indeed were resilient and rallied from a 14-point hole to boost coach Jay Wright's career mark against the Blue Demons to 19-2. But can they survive those deficits against the top teams in the Big East for the rest of the season?

"It's what the Big East is going to be like this year," Wright said.

Villanova's national championship banner hangs above the court and the Big East Tournament trophy sparkles in a display case. But lost in the celebration of the 2018 accolades was the fact that Villanova failed to win the Big East regular-season crown for the first time since 2013. Xavier snapped the four-year run of Villanova's romp through the conference — and the Wildcats aren't playing this season much like a team capable of reclaiming their crown.

"I think there's a lot of teams that could be anywhere from one to five and that same team could be five to 10," Wright said. "And we're one of them."

Booth, star of two national title teams, at least gives the Wildcats a shot at the Big East. He shook off a slow start and buried a 3 with 7:54 left for Villanova's first lead of the game, 58-56. Booth was fouled on a 3-point attempt and sank all three from the free-throw line to make it 63-59. Booth added another 3 late to keep the cushion at six and preserve the victory.

The national champion Wildcats (10-4) won their Big East opener and haven't lost to the Blue Demons since Jan. 3, 2008. The Blue Demons have failed to make an NCAA Tournament over that span while the Wildcats have ascended to the rare air of top programs in the country over the last 11 years.

Eli Cain willed DePaul (8-5, 0-2) to an early lead with 14 points in the first half and wilted in the second when he scored only two. Max Strus also scored 16 points for DePaul.

"We don't have a background of success over a period of time that understands what those moments need and call for," DePaul coach Dave Leitao said.

The Blue Demons led 30-16 and the Wildcats were again rattled in their $65 million renovated home court. Michigan and Furman sent Villanova to consecutive home losses. The Wildcats were also upset by Penn just down the interstate at the Palestra.

The Wildcats were expected to experience a transition season after losing four players from the title team to the NBA. But the hardships have been greater than expected. Wright has shortened his rotation and played five players for at least 16 minutes in the first half. The Wildcats have always used 3-point bursts to slice leads and got them late from Paschall, Bey and Jahvon Quinerly that pulled them to 38-34 at the half.

Paschall and Booth bailed out the Wildcats in the second half.

"These two keep everyone together. They are our rocks out there," Wright said.

The Blue Demons had 18 turnovers.