The NCAA Tournament by the numbers 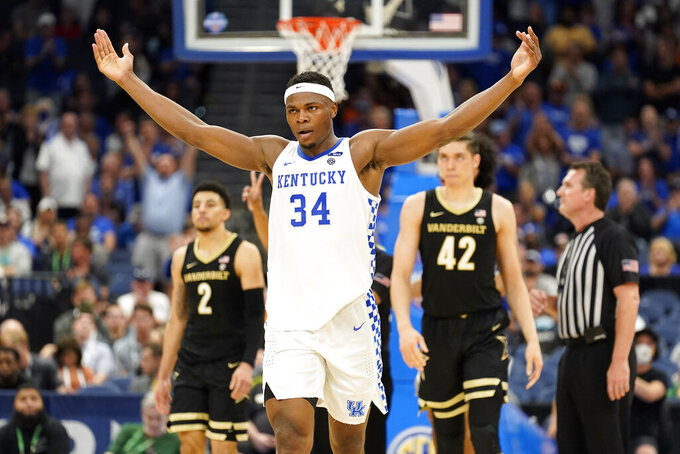 A look at the NCAA Tournament by the numbers:

0.52 — Average years of experience of Arizona players, making it the youngest team in the field and third-youngest in Division I, according to the analytics site KenPom.com. The Wildcats' online roster lists one sixth-year player, two juniors, eight sophomores and five freshmen. For purposes of KenPom's calculation, a freshman has zero years of experience, a sophomore has one year of experience, etc.

5-7 — Height of Arkansas guard Chris Lykes, the shortest player in the tournament.

7-4 — Height of Purdue center Zach Edey, the tallest player in the tournament.

9 — Big Ten schools in the tournament, most of any conference and tied for most in Big Ten history. The Big East holds the NCAA record with 11 bids in 2011.

27 — Oscar Tshiebwe's double-doubles in 33 games for Kentucky. He averages 17 points and 15.1 rebounds per game.

30 — Age of Loyola-Chicago's Valentine, the youngest coach in the tournament and Division I.

57.7 — Points allowed by San Diego State, lowest per game in the field and second-lowest in Division I.

75 — Age of Duke's Mike Krzyzewski, the oldest coach in the tournament.

80 — Miles Wisconsin will travel from Madison to Milwaukee for its Midwest Region game against Colgate on Friday, the shortest distance any team travels for the first round.

87.8 — Nation-leading points per game by Gonzaga.

2,425 — Air miles Seton Hall will travel to San Diego for its South Region game against TCU on Friday. That would be the longest distance any team travels for the first round unless Bryant wins its play-in game Wednesday. In that case, Bryant would travel 2,567 air miles to San Diego to play Arizona on Friday.

338,210.96 — The dollar value of a unit the NCAA pays out to conferences from the men’s basketball performance distribution fund. Conferences get a unit for each round one of its teams plays in. They accrue value and are paid out over six years, so the true value of the unit will end up being about $2.03 million. Even if all nine Big Ten teams lose their opening games, the conference will earn about $18.2 million for this year's tournament.