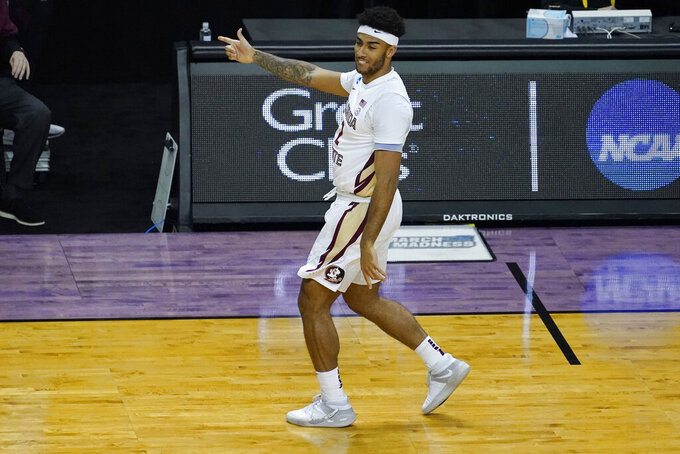 Florida State guard Anthony Polite (2) celebrates a three pointer during the second half of a second-round game against Colorado in the NCAA college basketball tournament at Farmers Coliseum in Indianapolis, Monday, March 22, 2021. (AP Photo/Charles Rex Arbogast) 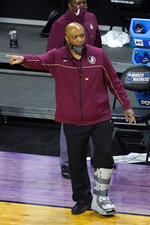 INDIANAPOLIS (AP) — North Carolina is long gone. Duke never made it. To find the ACC's biggest threat at March Madness this year, look past Tobacco Road and into the panhandle of Florida.

That's the home of Florida State, a school where hoops has moved out from the shadows of the football program, to say nothing of the blue bloods that have dominated the conference, and the sport, for decades.

The Seminoles are in the Sweet 16 for the third straight time. On Sunday, they will go against top-seeded Michigan. They have an NBA lottery pick in the making in Scottie Barnes. They've got a bench that goes five deep and a scoring sheet that doesn't feature one player who averages even 12.5 points.

They have established themselves as arguably the most consistent regular and postseason presence in their conference, where their 40 ACC wins and three Sweet 16s since 2018 are more than Duke or North Carolina. The only other ACC team left in this year's tournament, Syracuse, is here as an 11 seed. Florida State is a 4.

“We coined the phrase ‘new bloods,’” says coach Leonard Hamilton, in his 19th year as FSU's head coach. “If we're looking at a conference of schools that have 75-80 years of successful tradition, and we think we're going to become blue bloods in our lifetime, it's not something we can accomplish. So we just coined our own phrase, found our own niche, and got behind something we can control.”

Athletic director David Coburn attributes this renaissance in large part to Hamilton, which, in turn, is a credit to Coburn's predecessors. They were under constant pressure to move on from the coach during his early years at FSU: Hamilton only made two trips to March Madness and didn't win a game there over his first eight years.

Before moving to Florida State in 2012 to become an adviser to the school president, Coburn was a major player in Florida politics, where he had a close relationship with the then-president, T.K. Wetherell.

“I kept telling him, ‘You better have somebody who can do it better here than he can,’” Coburn recalls of conversations with Wetherell. “Because the way he handles his players. the way he graduates his players. all the things he does for you in community, you need to be sure you have someone better before you make that move.”

Part of Hamilton's skill set, in Coburn's view, was his ability to navigate the push and pull between a basketball program striving to become something and a football program that was. Undoubtedly, Hamilton learned a lot — and took some lumps — from a previous nine-year stint at Miami that closed with the program's first trip to the Sweet 16 in 2000.

It's no coincidence that Florida State's current string of success came after the school spent $17 million to refurbish its home arena.

“It gave people a sense that there's an investment in basketball at this university,” Coburn said.

And Coburn said that once Hamilton started getting buy-in from his own fans, and his own administrators, “then you get him in front of the right kids and parents, and Leonard can recruit them.”

Hamilton's recruiting breakthrough came in 2015, when he signed two blue-chippers, Dwayne Bacon and Malik Beasley, each of whom were one-and-dones taken in the next year's NBA draft.

Now, a team that had two lottery picks between 1989 and 2017 has had three over the past four years, including two last season: Patrick Williams and Devin Vassell. Williams went fourth to the Chicago Bulls last year, matching him with Dave Cowens as the highest pick to come out of Florida State since 1970.

You have to go back almost that far to find the last true golden era of Florida State basketball, if you want to call it that. Its only trip to the Final Four came back in 1972.

It is now on an unprecedented string of trips to the Sweet 16. Hamilton recently got a contract extension that could keep him at Florida State through 2025, when he will be 76.

Win or lose Sunday, his program looks to be an a steady upward trend.

“We can't get content with where we're at or the success we may have had," guard M.J. Walker said. “Coach Ham does a great job of keeping his foot on the gas, doing the same things in the offseason. The relationship thing for us has been a big jump over the last couple of years.”