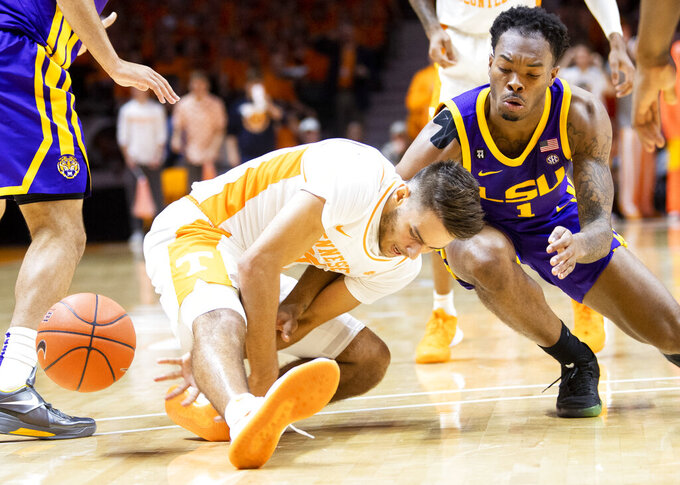 KNOXVILLE, Tenn. (AP) — Tennessee is counting on a freshman point guard who arrived on campus just over a week ago to help the Volunteers break out of their slump.

Santiago Vescovi, an 18-year-old from Uruguay, cracked the starting lineup in his Tennessee debut Saturday and had 18 points while shooting 6 of 9 from 3-point range in a 78-64 loss to LSU. He also committed nine turnovers but provided a spark that even left the opposition impressed.

“He’s going to be a very, very good player,” LSU coach Will Wade said after the game. “Obviously, he’s a tremendous shooter. As he adjusts to the speed and pace of the game, he will continue to get better.’’

Tennessee (8-5, 0-1 SEC) has lost four of its last five games heading into its Tuesday visit to Missouri (8-5, 0-1). The Vols need Vescovi to continue his rapid development as they chase a third straight NCAA Tournament berth.

Vescovi ended up in Tennessee’s starting lineup just 15 days after Vols coach Rick Barnes said the newcomer was “highly unlikely” to play at all this season. The change in plans speaks volumes about Vescovi’s considerable potential and Tennessee’s precarious backcourt situation.

One day after Barnes had expressed doubt Vescovi would play this year, senior guard Lamonte’ Turner announced he would be undergoing season-ending shoulder surgery.

Turner’s injury created a hole in Tennessee’s lineup that Vescovi is willing to fill. Vescovi had four assists and a team-high six rebounds to go along with his 18 points against LSU.

“I’m feeling really comfortable,” Vescovi said. “I still need to get to know more of my teammates - I’ve been here just for a week - but I think the team’s been really good having my back. It’s my first week, I’m going to (make) mistakes, and they’ve all got my back. That’s something I really appreciate from them.”

Vescovi signed with Tennessee on Dec. 28 as a mid-year enrollee after spending the second half of 2019 at the NBA Global Academy, a training center at Canberra, Australia. Up to 12 student-athletes attend the academy each year and work with NBA-trained coaches while attending an area private school. He also had earned placement in the NBA Academy Latin America in Mexico City.

Barnes initially believed Vescovi wouldn’t play this year due to the steep learning curve the 6-foot-2 freshman would face adjusting to college-level competition. Once Turner’s injury changed the timetable, Vescovi showed he’s such a fast learner that Barnes immediately gave him a featured role.

“I was really taken aback by what he knew about our offense,” Barnes said. “I was totally surprised. We obviously wanted to put in some things that he was familiar with and he’s used in the past, and we did. We used some of that today. As time went on in practice, our mindset was that we know after just a couple of days that it was inevitable he was going to be a starter. So we said, ‘Why not do it now?’ “

Vescovi said a Tennessee staffer sent him video to give him an indication of the plays the team likes to run. Vescovi studied that video enough times to run the offense effectively in his Tennessee debut.

But obviously he still has plenty of room for improvement.

His nine turnovers represented the highest single-game total for a Tennessee player all season. Barnes said Vescovi may have gotten fatigued down the stretch. Vescovi said he also had to adapt to the level of competition he’s facing now.

“We have big guys in Australia and Mexico and other places, but they’re way more athletic here (and) stronger,” Vescovi said.

Vescovi’s teammates note that he hasn’t turned the ball over much in practice and expect him to make a quick adjustment to the improved athleticism of his opponents. He already has shown he’s a fast learner.

“It’s looking bright for our team in the future with him at the point,” freshman guard Josiah-Jordan James said.