No. 1 Louisville bounces back to rout Eastern Kentucky 99-67 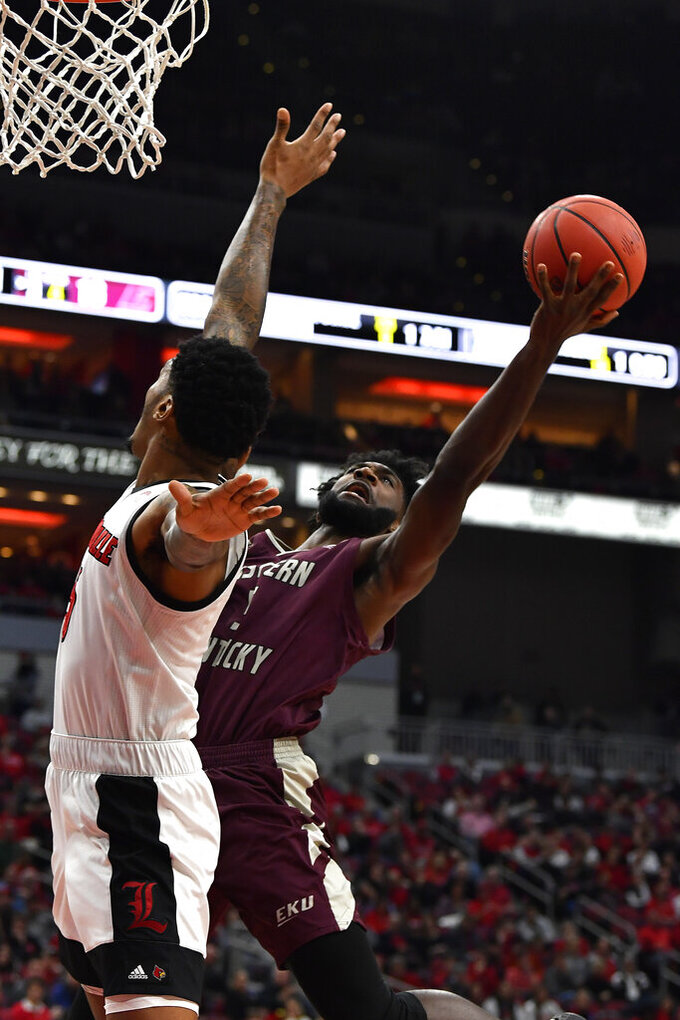 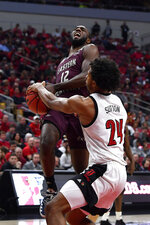 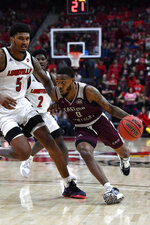 LOUISVILLE, Ky. (AP) — Louisville rebounded from a lackluster defeat that will end its stay at No. 1 with the offensive patience and accuracy that fueled its rise to the top.

Jordan Nwora scored 26 points, Steven Enoch had a career-high 23 and the Cardinals shot 63% in both halves to blow out Eastern Kentucky 99-67 on Saturday.

After taking their first loss Tuesday against Texas Tech in the Jimmy V Classic behind 34% shooting, the Cardinals (10-1) responded with baskets from all over the floor. They made 17 of 27 from the field before and after halftime, including 9 of 19 from long range, to pull away from their in-state opponent.

That wasn't easy against an EKU defense that consistently pressed the Cardinals.

“We wanted to make sure we didn't just settle for the first shot or the quickest shot we could get," Cardinals coach Chris Mack said. "We weren't perfect, but Ï thought we made some really good decisions.

Nwora had the hot hand throughout, making 6 of his first 8 to finish 10 of 14 and 3 of 5 from behind the arc. The junior forward certainly sought improvement after a 4-of-16 performance epitomized the Cardinals' night against the Red Raiders in New York.

“My mindset was just being efficient, getting back in the gym and just continuing to get better," said Nwora, who also had seven rebounds, three assists and two steals. “Games like that happen. You just have to move on to the next one."

Enoch, meanwhile, made his first seven attempts to finish 9 of 10 and surpass his previous career best by a point. He was also 5 of 6 from the line, with his miss the only one by Louisville in 23 attempts.

Enoch also grabbed six rebounds as Louisville controlled the Colonels (3-7) 35-24 on the boards and 42-18 in the paint. Malik Williams made a pair of 3s for 11 points with six rebounds.

EKU began 7 of 13 from the field to stay close before several cold spells created a 20-point hole before halftime that steadily grew in the second half. The Ohio Valley Conference school shot just 37% — including 33% in the second half in losing their fifth straight.

Ty Taylor had 13 points, Tre King 12 and Jacquess Hobbs and Jomaru Brown nine each for EKU.

“They made shots and we didn't shoot the ball well like we should have,” Hobbs said.

Louisville senior forward Dwayne Sutton had 11 points to surpass 1,000 in his career between the Cardinals and UNC Asheville.

Though Louisville will fall from No. 1 come Monday, this win should minimize its drop in the Top 10.

Eastern Kentucky: The Colonels made nine 3-pointers, but those 18 misses along with struggles inside the arc led to Louisville scoring opportunities. Their trapping defense contributed to 16 turnovers, but their 14 miscues also led to 34 Cardinals points.

“We couldn't capitalize off some turnovers we forced,” second-year coach A.W. Hamilton said. “We missed some shots we can make. They are hard because there is not a lot of room for error with them. If you make a couple of mistakes, they can go on a 10-0 run on you in a second."

Louisville: After three games of 36% shooting or worse, the Cardinals got healthy against the Colonels. They worked the ball around for 22 assists, displayed better shot selection and went deep in their bench. They sometimes struggled against the trap, but figured it out often enough to get the ball in the hands of their top two scorers. Allowing 16 offensive rebounds concerned Mack, but his team handled the defensive boards 23-8.

Louisville: Hosts Miami (Ohio) on Wednesday in its final game before Christmas and will have 10 days off before visiting rival No. 8 Kentucky.